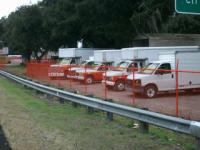 Provide faster service. I was there for 45 minutes trying to get my reservation that was made online.

The real location is different that you gave me

Quite honestly, this location was hard to find, and the Gentleman that waited on us was to put it mildly, beyond retirement years and no business even working. He could barely walk and simply was NOT polite or helpful. Just horrible location and service. Go somewhere else.

You can not have an employee sick first, second employee with around 80 years old man can not do the best customer services for your company, and third I am still waiting for my claim number 401712781 any one contact me yet

Location was supposed to open at 12pm, at 1206pm I decided to call number in which I received and answer and was told they'll be there in 10mins and hung up on me. He arrived bout 8-10mins later. He wasn't the nicest person when he did arrive and took his time getting me signed in. I left with rental about 1235pm

We got here 15 minutes before our appointment yet waited over an hour for the employee to help one single customer. He was also very rude to the customers who were calling him as he began snapping on them. Also he was not technologically comprehensive. I paid ahead of time online and uploaded my drivers license to shorten the check in time yet he still asked for the license again and made me go to the truck alone to check for the key yet the key was 3 feet directly behind him. This was an AWFUL experience and the fact that there were no U-Hauls 20 miles of where I originally booked mine and had to drive to the outskirts or Orlando to receive awful service is disrespectful. I will never get another U-Haul again I've never had such an awful experience before.

Great people helpful and friendly, and will go out of there way to make sure you are satisfied with your rental.

The location is in lake Alfred not Haines city. I finally found the location by driving to one I seen open that was about 5 miles away. When i finally arrived he was just opening and he was pulling the trucks in the yard and checking the lock box. We went inside to do the paperwork and when he gave me the keys the truck WAS NOT CLEANED FROM THE PREVIOUS PEOPLE. I WAS VERY UNHAPPINESS WITH THAT. I WOULD LET THEM KNOW THAT THEY WOULD HAVE TO MAKE SURE THEY BRING DISINFECTANT WITH THEM.

No fault to the location. The truck was roach infested inside. I had take out for the movers. I left the takeout bag for 30-45 minutes. On opening the bag it had several medium size roaches in it. I had also a small box I carried inside the house and discovered around 20 roaches in it. Now I need to call an exterminator.

Was locked up soiled and no answer on the phone only leave a message, which I did. Dropped off carrier at 17/92 on the 17th and the man was helpful. I would recommend this place.

office was dirty and clerk did not wear his mask but sign said service declined if the customer doesn't wear mask, never received last bill,

Awesome people at that location with a home type feel. Ms.Debbie is a pleasant and patient person. She's Awesome and takes the time to get things done right for you. I highly recommend this location.

The person who attended me was rude Did not check the car millage they were not correct. Then they sent me to the wrong location

It was supposed to be self pick up but equipment was not ready and needed to go thru office.

The address sent me to a different place. In the map You have to write exactly the name and not the address because apparently there are 2 place with the same address. And it's almost 9 min away from each other.

We were treated POORLY. The Uhaul System was down and when we walked in the Man that was running the location told me the customer, whom I walked in with my husband to LEAVE, only 1 Customer at a TIME (we were together). We were there OVER AN HOUR AND A HALF. I understand systems not working. However, what I don't understand is, the treatment. I also don't understand when I ask a question as to why I am being charged $67 randomly and I told him my charge is only supposed to be $50 (including tax), that is what I saw on my contract. His response is I don't know it's taxes probably, or it will fall off. At this point, he can't print my contract, show it to me, I was done and had no where else to get another Uhaul trailer and was from out of town. I then receive a copy of the contract from Uhaul and see I have been charged an extra $16 for an insurance that we did NOT approve. This makes me very ANGRY.

the problem is that they gave me 2 addresses to drop off the truck and there was no one, wasting my time and they are charging me extra miles and it is not my fault

"Get some younger people working there." He needs help. The owner seemed to be overwhelmed with his work. He was struggling with the kindle. The contract I received by email was too small to print out. When I went to return the truck, he was gruff in his tone telling me he had not time to deal with it and we would have to wait. I waited and finally wrote down the mileage and gas content. When I went to give him this info in order to leave, he told me he did not need it and would get the info off the truck himself. I will most likely not rent from him again.

I was charged 504 dollars for a pickup truck rental that I used for 6 hours and only put 75 miles on. When I checked the truck in the man at the counter put the mileage as 9515 when it was really 8515. I caught the mistake and He attempted to refund the but it was then charged to my card again 2 days later. I am still dealing with the issue.

A lot of stuff in office

I think that a more capable person should reconsider, the man is very old and he is very wrong, otherwise, I will look for another place where they attend faster, I do not recommend it

We reserved a 5x8 cargo trailer and the email said it would be at 229 Dairy Road in Auburndale. When we went to pick it up the manager there said he didn't rent trailers, only trucks. So then he had to call and find one and we had to go to a second location. Very aggravating waste of time.