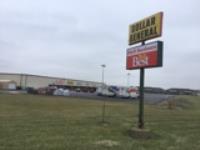 I only needed the trailer for a few hours not 24hr. To save money, have an hourly rate. I have used this location several times and all of them have been good experiences.

Excellent service at this location.

The folks at M&M are very helpful.

Everything from online reserve to service from M & M and the quality of the equipment was all good and required little effort on my part.

I was supposed to pick up my equipment at U-Haul moving and storage in Evansville Indiana. I had my reservation, confirmed it the night before. I requested a 10 foot truck and auto transport trailer. When I comfirmed the night before I was told I would have a free upgrade to a 15 foot truck. Unneeded but ok. When I arrived the pre check in app would not work completely but said I was getting a 20 foot truck. I went inside and waited. Finally got to check in with clerk. They had no truck for me. Not a 10, 15 or a 20. They had rented my truck to someone else. So after already driving 500 miles they sent me to M&M hardware which was another 20 miles or so. When I arrived there the quy was not personable at all. Said he could not rent to me because his system was down. Finally he called someplace else and went thru their system. They kept trying to charge me more than what my original contract was for. Finally I got the equipment. But it was still a 20 foot truck which I did not want but I had to take it to get this move done. He told me to turn it in where ever I wanted because he could not find the place I had designated. It was just a bad experience all the way around at both pick up locations. I drove the truck 500 miles home in the rain. The windshield wipers were coming part more and more as I drove but I did not have to stop and buy new ones. I did tell the returning location about them.

Did the drop off but app would not let me check in. Back of truck would not lock and lock didn't work with key we had so we had to leave dolly's in truck not being locked because we had no where to store it.

Eric and his staff are wonderful. They do a great job with check out and returns. Only complaint would be the lack of inventory.

We were to pick up the UHaul at Riverside in Evansville. We get there (lots of trailers on the lot) and they send us to Haubstadt which was 20 miles+ out of the way. Secondly, we were told we would get a call 24-48 hours before pick-up where the pick up would be. There was no message at our home or on our cellphone. The man at Haubstadt was very good and kind to us, but the location was very inconvenient and cost 2 hours delay of getting our packing started. We did not appreciate the attitude of the man at Riverside Evansville location. He didn't really give a rip and was too lazy get up off his butt.

I rented a U-haul car trailer from M&M Hardware. Very nice trailer. Eric took the time to explain all the features of the trailer. He explained how the trailer fender folds down for extra clearance for opening the car door. I would have never known about it. Made it so much easier. Thanks Eric!

This is the best Uhaul dealership I have ever dealt with!

Everything went well, no issues!

Our experience was great!

Extremely helpful with returning the truck.

The trailer itself had scratches and dings, but was fine overall. The interior cab was in good condition. The personnel at this location had problems with the computer. For instance, my phone number was listed on the reservation, but my husband picked up the vehicle. They were unable to change the phone number on file, so even though I wasn't there, I kept getting text messages about creating an account, uploading pictures, etc. I had to then forward those to my husband even though he was physically there and I wasn't.

I used the online service for a 15 foot truck and was told I had to bring it back to that location after the online service told me I would have it to drop off at my new location. I then was forced to pay for a 26 foot truck for a studio apartment amount of stuff which cost me more than $150.00 As well as insurance cost. I am not pleased.

Not change places/times. Have the equipment that was reserved! Very frustrating!

ERIC was extremely confrontational and rude and hateful to me on the phone. The questions he was asking me were questions he should have called the location I got the uhaul from. He berated me on the phone about the dolly then he was shitty because I had forgotten the name of the woman who helped me. In addition after I ended the call with him (I gave the address and phone number because apparently he doesn't have that information but has my contact information?) I called the store back hoping to get a manager. I was met with the exact same hostility which makes me believe maybe Eric is the store manager too?? I would hope 2 people aren't that equally evil in the same place? Terrible and awful. What a way to start my new day in my new town...

I want to explain why I said that the equipment was not "clean and well maintained," because I do not think it is the fault of the pickup location. I simply think that U-Haul should have taken this trailer out of service a while ago. I rented a double-axel 6'x12' trailer, and received Equipment # RV1514D-XHS6954PA. I purposely rented a covered trailer because it was raining, and I had to move furnishings from an apartment. The trailer leaked water badly in more than one location, and got my possessions very wet! Although I did not have any damage to personal property, I certainly could have had serious losses if my possessions were more sensitive to water. After driving the 5 hour trip with intermittent rain, I opened the trailer to find water had leaked through the roof along both long seams of the rooftop (through the rivet holes) AND a large amount of water had entered along the entire height of the sliding door track, complete soaking the towels and blankets that I used to protect the furniture. My baby's crib was soaked, my wooden desk had standing water on it, and our queen mattress and box springs would have been ruined if I hadn't covered them in plastic. I took pictures of the leaky areas if you would like to see. When I looked closer at the exterior and interior seams, I could see evidence of multiple applications of silicone caulk on almost all the seams, inside and out. Also, the roof looked like it had been patched together and had protrusions of the metal from poked or dented from within the trailer near the seams. I don't know what process U-haul follows to evaluate and remove vehicles from service, but this one got missed! This experience was very frustrating, and I will certainly be more wary of renting from U-haul in the future. Even though it was not an expensive rental ($32.50), I still think I should get a full refund for the troubles. I would like to be contacted regarding this experience.

these people were so nice and friendly. easy in easy out took less than 10 mins! quickest rental ever!

When using this moving company I found it to be unreliable in giving customer satisfaction. When I called to make sure my truck would be available after making my reservations it was not. I also turned in the rental a day earlier and they charged me a additional charge after I left it cleaned and at the gas where it was when I picked it up. I will not be recommending this company to any friends or family. Or even use them again myself .????