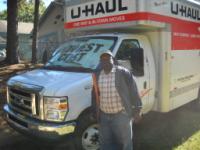 I picked up the truck in Mississippi. It was filthy in the cab and back of the truck. The guy there had us hook up the doly in the rain so he would not get wet. We spent half the day cleaning the truck just so we could put our stuff in it. After that the truck made between 6 and 9 miles to the gallon all the way to ky. It poured rain 3 different times and I called to complain to customer service who told me that they would refund me some money upon return and that I would be given 3 extra days for free. I returned the truck and doIy in Those 3 days. Never got any refund at all. And over 2 weeks later I got charged for those 3 days on the truck and doly which bounced my bank account. Now I can not get anyone on the phone. I am soooo pissed.

His computer was so slow. But he was a fabulous gentleman to work with.

Bob would be the improvement

Location was close and convenient. Thanks U-Haul.

This location was really convenient and met my need. Thanks!

We had to hook up the trailer ourselves, and had to walk back and forth to do paperwork.

Operator was 1 hour late. Uhaul told me I would have a $50 credit because of the inconvience but I still paid full price. The owner operator of this business is not concerned with customer service. I will never rent from him or Uhaul if I can help it.

This was the worst experience I've ever had and will look for other services to rent from in the future. Not only did the company not have the trailer available when I checked in 2 days before pick up and paid online before the pick up (â€œcutting me down on half of the timeâ€ - per website), they sent me to another location without checking to see if it was open. That's first re-route was a 20 minutes drive north from where we needed to be, then after waiting on holds over the phone for more than an hour we were sent an hour south to a business that (in my opinion) probably shouldn't even running due to it's cleanliness and lack of knowledge of the system. The man running the place can't pick up the jack to assist customers. The business wasted 3 hours of my time/gas and those who volunteered to help me. Your customer service technician's solution to this is to credit me back $50 which has still yet to be shown in my account. This business is poorly ran in general and will recommend to others that UHaul services in all locations should be avoided.

First of all, Uhaul changed our pick up location to this place, which was 40 miles away from my house, two days before my move out date. It was a huge inconvenience, and the location they sent me to was awful. It was very sketchy and the person was an hour late. I was supposed to pick it up at 10 and they didn't arrive until 11 and I could not contact them with either number I was given. U-Haul has been a huge disappointment and I don't know that I will every use them again.

I was at the Uhaul office over an hour and the salesman still couldn't figure out how the get the information into the system correctly. He called someone for assistance & it was done in less than 5 minutes.

Had to load trailer myself in the rain and I am a smaller 58 year old female. Older man was nice but very slow with computer and check out. Uhaul sent me text for drop off location which I took to on time and followed precisely. I got calls from pick up and drop off telling me I took it to the wrong location. I followed your instructions sent to my phone but your employees were unaware of those instructions. Got eventually worked out but overall horrible communications. Good equipment though. Might try someone else next time.

The process to check in - creating an account etc.. is too much.

Although uncle bobs place was fine I had to drive 30 min away from my asking pick up location, I ordered blankets and a Dollie which I did not receive and was charged for, I also was given a truck with no ramp which I also ordered

The site is in the side yard of a personal dwelling but the owner was very friendly!

I was happy with Uncle Bob's customer service but the location was not safe and I felt a little uncomfortable. The establishment was very dirty, I did allot of my data entry myself because uncle Bob was too slow and didn't know how to enter some info. But must say the customer service was good. Also I was given the truck a little under 1/2 a tank I filled it up and dropped it over with a little over 1/2 a tank. All in all it was average.

A shocking location and difficult to locate

I had some problems at first getting a truck scheduled. Local office and Jackson, MS. did not agree on truck availability. Had to delay trip several days. Once the schedule was fixed, everything was OK.

We reserved the truck and trailer online for Vicksburg, MS. We were happy that we found a location with both the truck and auto transport that we needed. Also, we were please to have received a lower cost since we did a price-match against a competing company. Unfortunately, after booking, the CS rep called to explain that the truck was not 30 miles away in Vicksburg, but 55 miles away in Hazlehurst, MS. She offered a $100 discount for the change. Sadly, things went very wrong at the Hazlehurst location: The manager was having a medical procedure done, so his son was trying to assist with our rental, but he wasn't well trained. The process took a full 2 hours. First, he was very slow on the computer program. Then, his computer invoice didn't reflect either of the 2 discounts. I called the U-Haul reservation number and waited 17 minutes to speak with someone. The rep on the phone neglected to show both discounts on our reservation until we had them on the phone. Then, the location rep had to back out of the system and come back in a total of 3 times. The location rep nearly let me leave without charging me for the auto transport. I explained to him that he had forgotten the trailer. Again, there was another discrepancy between his record and the cost for the trailer when we booked it. Again, I had to call the U-Haul rep to straighten out the cost matter. Again, the location rep had to back out of the system and come back in a 2nd time. Firstly, I was told that we were not permitted to haul the Honda van on the trailer and a rental was denied. This is very confusing because we made the reservation with a very competent representative with his full assurance that the truck and the proper transport trailer were on location. I suspected that the location had attempted to loan me the wrong trailer. They had two separate auto transports on the lot. The rep on the phone finally discovered that the proper trailer was on their lot and read the registration number aloud to the location rep before he realized that he was attempting to loan me the smaller of the two trailers. I had movers waiting to help me load the truck and I had to make them wait for 4 hours while I got the truck and trailer. Lastly, both of the two location reps seems quite competent with handling the maneuvering of a truck, but not with the hitch or tire tie downs. When I first attempted to drive onto the auto transport trailer, the hitch flew up into the air because the location rep failed to tighten the trailer to the ball. After finally getting the van on the trailer and traveling to Port Gibson, MS, I noticed that the wheel tie downs on the front tires of the van were both off. On the right side, the tire was on top of the tie. I had to use my own utility straps to secure the front right tire. The front left tire restraint continued to come off every step of the first half of my trip to North Carolina until I finally pulled

When you ask for a rental truck (which we use every year) make sure you provide the CUSTOMER with a truck in their location - don't make them drive more than 10 miles to pick the truck up. Have in locations that are clean and safe.

Despite the fact it took a little longer to get the truck, the service was ok.

Everything I had ordered was not available. It took awhile to get everything entered in the computer and I was still initially charged for the items that were not available. However, the man we dealt with was very nice.