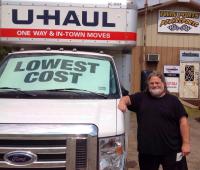 Man and a girl at front desk talking about other employees swearing as well and talking about someone who slept with some guy ??? Lots of drama going on about someone getting fired ? It was like drama and they need more help at desk area the girl I asked to help said she was not able to do computer stuff .... I think she worked there she was behind the desk .... She could be more professional if she does work there she was short I didn't get a name .... on return there was no one at location and he said he was only a volunteer and has been letting uhaul come there for 15 years and he hasn't seen a dime for his efforts ?? No internet service and his building was for atv repairs and no one was there at 11:30 am we were waiting Outside and some limo driver repairs cleaning person said he shows up in afternoons sometimes I asked him where or who I should call and he said I don't know I don't work for them ok .... I called the number and a general man answered he said he was a few minutes away so I waited to get the uhaul Checked back in .... he did ok once he found his cheater glasses and he sent me an email confirming our uhaul return ... defining moment for a quite interesting Experience I must say you can't make this stuff up lol

Mobile drop-off was much easier.

I was scheduled for 12pm when the business is supposed to open on Saturday. The door didn't get open till 12:37pm after I made a couple calls to the Superior location to see if they could figure out what was going on. The person I was finally attended to by was the son of the owner. He was nice and apologetic and said â€œSorry man my dad is just dragging his feet.â€ When I dropped off the trailer at Superior I was told the owner said he had a family emergency so apparently he lied to the good people at Superior U-haul about his reason for not being on time.

U-Haul is horrible to work with. Very rude and they do not know what they are doing. I will never rent from them again.

Staff was extremely helpful and friendly. A pleasure to do business with.

Friendly and flexible...so nice to deal with at the end of a long trip!!

Just repeat the performance i got and everyone will be happy. Friendly help added to my rental

very nice parking lot to turn around in and park.

I made my reservation weeks in advance to have the trailer at an alternative and more convenient location to the TwinPorts Power Sports. At the last minute, I received a text telling me to pick the trailer up at a different location (TwinPorts Power Sports). When I tried to call the Hermantown location where I had reserved the trailer, I was transferred to the main U-Haul service number and waited approximately 30 minutes to talk with a representative. He told me that I was simply unfortunate that no trailers of the size that I had reserved had been dropped off at my desired location and that I was one of only 3% of customers that do not get what they had desired. That was little consolation to me. When I called TwinPorts Power Sports they told me that they had no record of my reservation and did not have a trailer of the size that I had ordered. This was 16 hours from the time that I had planned to leave town with the trailer. The owner there was wonderful and was able to call one of his renters who brought the trailer back early so that I could have the use of the trailer. Very disappointing that a reservation with U-Haul (especially when made far in advance) does not guarantee that the unit will be available at the time or place needed. I doubt that I will ever rent with U-Haul again. Just not reliable!

No one was there even though it was open.

Mike was so extremely helpful with absolutely everything!! I am so thankful he was there to help me!

Our agreement was changed only to help out owner and we paid double was we were quoted. Not yet refunded one the amounts we paid. Not happy!

He was very understanding and patient.

There was no sign, u haul, to identify the place to pick up or drop off.

Please provide them a computer to work on - they needed to do a manual paper contract which the system did not see and the drop-off location didn't know about. Thanks!

Be on site. Answer their phone. Be open for business

Place was vacant. No snow removal done. Looked to be closed.

Poor guy doesn't have a computer to help.

I signed up for a more convenient location. Uhaul called and changed the location for the convenience of uhaul. This was insulting

Sent to another location. (This U-Haul center was "full"). Person who sent us had no idea where it was...told us it was in one place, but we spent far too long looking for it ourselves and eventually realized he had misinformed us and when we finally did find the alternate location, it was blind luck as the promised "well signed" location was behind another building and pitch black. Nice work U-Haul. 2 times I've used you, and 2 times I have had issues. That's enough for me.

The trailer was never checked in with U-Haul. Had to deal with Twinports Power Sports as well as U-Haul a number of times to get the situation cleared up.