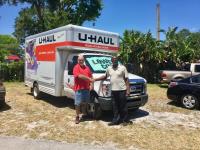 Equipment was faulty and the staff were not attentive to the needs. Not a good experience.

There was no one there during business hours for me to return it. I went back three times and finally left it outside by their gate. Phone calls do not get returned either

Door on the trailer did not work properly. One roller on passenger side would hang up from time to time.

The man at the desk said â€œthis is t what I usually do and I don't really know what I'm doingâ€. The mileage was Wrong on the truck and truck called after about two miles of driving, a link was sent to me to enter correct mileage and gas tank bc that was wrong too!! However, when I dropped off the truck they did not fix the incorrect mileage and charged me EXTRA MILEAGE!! The mileage when I picked up the truck was 93686 and they entered 93625 and charged me extra. Also the tank registered less than 1/2 tank and it was reported to have 7/8! I told all of these things but apparently it didn't matter because it wasn't validated at drop off and btw, I left more gas in the truck than the way I received it. Lastly, I am a 54 year old woman and reserved a hand truck which this nasty pick up place said they did not have a hand truck nor could they tell me where else I could get one...really made my move miserable. The whole experience was miserable and messed up.

My original pick up location that I scheduled was for U-Haul Moving & Storage of Daytona Beach. At the last minute, U-Haul changed my pick up location to Emotorcars of Florida in Holly Hill. This location was decrepit and uninviting. My rental truck was littered with paper and tissues, sand was on the floor and the main cab smelled like piss. The gas tank was also just under the 3/4 full level. Furthermore, the owner of Emotorcars was very unhelpful when it came to my rental equipment. He rushed me and made me feel like an unvalued customer when I asked about the rental equipment that I had already purchased, but was not ready for me in the truck or at this pick up location. I had to go out of my way to the original pick up location I had reserved the truck at to get the rental equipment that I had purchased (and it also looked like there was several trucks available for rent, which made the process of having to pick up my rental truck at another location that much more frustrating). Finally, I filled the gas tank to over 1/2 tank upon my return (which was a day early and under mileage) and was still charged another $20+ after going through all of this. To say I'm disappointed with the way U-Haul handled my order and treated me as a paying customer is an understatement.

This dealer went out of his way to accommodate my truck rental. The original U-haul dealer that I reserved the truck with didn't let corporate know that they would be closed because it was Memorial Day. So I called uHaul and they sent me to another dealer. He was very nice and charged me for a lower price truck for my trouble.

Everything went perfect. Thank you.

My experience from start to finish with uhaul was terrible. I made the the reservation using the website and selected pick up at a location listed on the website in my town. I reached out the location only to be told they don't carry 15 foot trucks there, so I'm not clear why they were listed as an option on the website. I called customer service and was told that someone would call me by 600 pm the night before pick up to tell me where I could get my truck. At 601 pm the night before, still had not heard from anyone. I called myself and was given my pick up location. I arrived there to be told by the gentleman at emotors llc that he "did not do" one way trucks despite this being my reservation. He had to "call his manager," despite me being on the phone with uhaul and the service rep telling him that they do one way rentals and that truck was reserved for me. He took me out side and have me the keys. I received no paper work or contract. I was not given a walk around inspection. Upon entering the cab of the truck, it stank of cig smoke with actual cig butts in the cup holder. There was also soda spilled on the console and dash. I had to clean it immediately upon getting it home. But the best part, was as soon as I left the parking lot the low fuel light came on, even though the gentleman from emotors marked the key paper as 1/4 of a tank. I will never rent from uhaul again.

These guys had a truck ready for me when another location did not have a truck that I had previously reserved. I had no time to waste and they were prompt and friendly!

I was in a hurry using the U-Haul for a school function. Later when I looked at the paperwork I noticed that the person working there said that the fuel level was at half. When I got into the truck it wasn't even to 1/4. When I returned the truck I was charged $30 extra for refueling. Even though I returned it to where I found it. I did not notice this until afterwards.

Such a quick and easy pick up and return! The man in Holly Hill greeted me when I walked in and had everything all ready. I was pleasantly surprised that he had it all together. He just handed me the key! Awesome!! Compared to an experience on ISB it was excellent!

This location is not easy to find. There is a lot of other items that are not indicative of U-HAUL. It is not easily visible from the main roadway. Otherwise, the service is excellent. The gentleman serving me went well over Nd a ove to a comodate me. The truck was clean, easy to drive and good on gS.

Check their hours as they seemed to be closed on Sunday at 1pm. Drop-off was good for after-hours drop. Super friendly, super helpful people. Will be back. Would recommend.

Contacted local location to see if I was able to drop off truck and was advised YES that they needed the truck - Never mentioned anything about getting charged for dropping at different location - Was told I would be charged $80.62 and was charged over $200 for a truck I rented less than 2 hours.

Jeff, the salesperson, was great and understanding. However, my overall experience with Uhaul was awful. I reserved a truck for 3:30. My truck was not available until after 5:15. I had a deadline to meet where my items were stored and I would have been charged another month's rent if it wasn't for the mercy shown by the facility. Jeff, kindly brought me the truck when he had it, but it was beyond late. Moving is already stressful enough with many deadlines along with all the help that I lined up. This is simply unacceptable and there is no excuse for another customer keeping their truck for more than 3 hours past their deadline. I need to be called about this to make it right, because no customer should have to put up with this. I will gladly recommend Penske to everyone I know, unless Uhaul makes this right. Everyone makes mistake, but a good company does what they can to make it right. Thank you.

The truck smelled terribly of SMOKE !! even with (small) No Smoking stickers on windows. gas gauge was 1 mark above EMPTY ! Never picked up a rental before that did not have a Full Tank. otherwise it was ok. can Never rent truck again as withOut Running Boards, I had to use a step stool to get in & out of truck !!!

Emotors helped us out with a couple challenges and couldn't have been nicer! Really thankful for the problem solving help!

Went out of his way to find me the truck I needed to switch sizes.

Better marking sign to make it easier to find.

We were scheduled to pick up the truck at 10 AM on Sat Dec 22. When we arrived at the Old Kings, Holly Hill location at 10 AM, the gates were locked and nobody was there. We called UHaul and they were trying to figure out why nobody was there. At 10:30, they finally showed up and we were told that nobody notified them of us coming and that if they didn't have anybody coming in the morning, they normally go to breakfast first. We were told he was going to cut us a deal on the mileage and he was also going to throw in a dolly. After we signed the paperwork, they couldn't find the keys to the truck anywhere. When we walked to the truck, we found the keys inside the truck. We finally left on our way, late, which was a big inconvenience considering we had friends that took time out of their day waiting on us at the house to help us load. When we got to the house, we were missing the dolly which we were promised. Also, after dropping the truck off at the end of the move, instead of being given a deal on the mileage as we were also promised, we were charged an extra $15 for the mileage. Overall, it was a horrible experience.

EMOTORCARS HANDLED OUR MOVING NEEDS WITH PROFESSIONALISM AND PERSONAL CARE.

the staff at emotorcars was GREAT