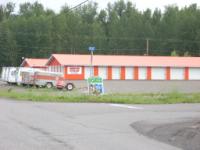 Nothing, this location was amazing ðŸ˜ŠðŸ˜ŠðŸ˜Š very helpful, and will be returning!!

very good management was pleasant to deal with

When you pre book for a 26ft you should get one. I never got to move all of our things. The dispatch center phoned and had a 20 ft with 5x8 trailer. Not near enough capacity for what we needed to load. Lady in Houston was helpful in trying to guide to get another truck. No success.

ita all bullshit n lies.. dnt listen to what u want or where your going..The bill will be bigger .way bigger when u return it.They act like they givn u a steal of a deal n charge way more when u bringnit bk..THUMBS DOWN

My initial request was for equipment in Prince George. Having to haul the trailer from Houston was an unexpected expense not compensated for.

The equipment was clean. My only issue is the wipers that are to the point they're a hazard, and the tires are absolutely not sufficient for winter driving.

The vehicle wasn't winterized - it had summer window washer fluid, and the tires were all at 60lbs rather than 90lbs, so I lost half a day trying to get them filled. And the passenger wiper was Badly torn and frayed

Good people very helpful I would recommend them

What a joke! Houston rented us a veichle that wasn't even supposed to leave northern BC. We tried to tell UHaul we were going to keep the truck for longer than 4 days numerous times. After four days we kept getting calls about why hadn't we returned the truck. When we returned the truck to Victoria BC the manager tried to blame my Mom for a truck leaving northern BC when it wasn't supposed to. Houston guy hadn't recorded the mileage when we left so they had no idea how to make out a proper bill. Victoria guy assured us that our credit card had not been billed for anything yet and wouldn't be until the situation had been figured out. Days later credit card statement came and we Had been billed a week earlier. Victoria guy kept blaming Houston guy, and as Uhaul is comprised of independent franchisees I get it. But Victoria guy wasn't able to comprehend my point that all uhaul contractors are on the same team. So Gary's mistakes in Houston are going to fall to Victoria guy to resolve. Not my 75 yr old Mother. Absolutely useless. I did push ups in Uhaul while uselessness ensued do I didn't lose it and yell at useless Victoria manager. VERY FRUSTRATING

uHaul charges to much for 1 way use

Remember to prepare the dolly

No one is at the store at 930am when I drop the trailer off. I called the number and I have asked to leave it there.

The agent in Houston was very friendly and helpful.

I was not aware that the Icefields Hwy (Hwy 93) in Alberta is permanently closed to larger non-pleasure vehicles and had to add a 800 km, 2 day detour [with 20ft U-Haul moving van +trailer] to an already difficult 1000 km move from Smithers BC to Golden BC. Had I known at the outset, I could have taken a much easier route and saved a lot of time and money (and stress).

U-Haul, no complain with the company but the place where I picked up the truck Houston B.C.! Yes, I feel very cheated. I was told the tank was full, trusted it went on my way. Arriving in Smithers B.C. some 65km further I noticed that the tank was 1/2 full, I called him asking if it was normal, he was wishy washy on his answer about how much the truck consumed. I gas up the next morning and put 70+ liters! horrified as I had 350km to do, over a 100Cad$. But at Kitwanga over 100km away I only put some 20liters, then Terrace around 15 and finally filled it up in Prince Rupert about only 45Cad$ For looking at the cost elsewhere to do the short trip from Houston perhaps 17$ would have done not 100Cad$ plus. How to improve service!!!! Close that location

I know uhaul is based out of the U.S. but it should list what is actually available at the Canadian locations, as I booked a trailer that was listed as available online and (thankfully I called the location ahead of time) found out was neither available nor was I confirmed at the location I booked. Then after picking up the trailer at a different location, my reservation was listed for 2 days when it was supposed to be for 4 days.

The UHaul was booked for Terrace 2 weeks in advance yet we had to make arrangements at great expense to drive 3 hours to Houston to pick it up - totally unacceptable!!

I reserved a trailer a month in advance. I phoned the uhaul when I drove by two days before the my moving date and my trailer was not in the lot. The representative had no knowledge of my reservation and I called the 1800 number. That is when I was told that my trailer would not be at the agreed location.... I did not receive notification.... I had to initiate the communication. In the end, I had to drive an extra 250 km to pick up a trailer elsewhere. It caused me to miss an extra day of work, cost me money for a babysitter and wasted almost $100 in gas. Then the trailer leaked and my furniture and personal items were waterlogged and ruined. I was treated like my frustrations were unimportant and the staff literally told me I was in the wrong in both situations. I have used uhaul in the past and been happy but after this experience, I will never use it again and I will tell others about my experience so they do not have the same misfortune. If uhaul had shown concern for my losses and made reasonable attempts to make amends things may have been different but I do not appreciate being treated with such blatant disrespect.

The entire experience with uhaul was horrible. It took several hours to book the uhaul, as I as booking it for work they gave me a very hard time when I asked if they could provide me with an estimate. Then when I arrived to pick up the van there was technical difficulties. Finally I go the van. Then when I went to return it they sent me confirmation that the cost was $0.00 so I called to see what was happening. The put me on hold for half an hour and I am still waiting on hold...... aweful experience!!