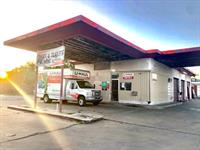 That poor woman sits outside in this heat, during Coronovirus pandemic or any other day. This location needs to conduct business from inside the building. She can't go inside because of the mold and medow. What U-haul can do is fix that small building for this woman that conducts U-haul business from her car. That's what needs to be done!!

This location was totally unacceptable. The agent was sitting in an old beat up car in front of what looked like an abandoned building connected to a tire shop that was operating on the other side of the building. The truck was full of what looked like white dog hair and was sticky. The agent gave me 1 Clorox towel to sanitize the truck. I was completely grossed out by the time I got to my parents house before being able to at least Lysol the truck.

Business owner was not on-site. Had to make two separate trips to location trying to meet up.

The roof leaked and got a lot of my stuff wet. My couche and clothes and bed. I had to to unlock the gate take pictures of the mileage and the gas. Then I had to u lock door and get the dolly I rented. It was very un professional.

It is hard to get to the main office at u=haul it take me 2 hour to get custom service.

My scheduled time pick up was at at 10a. No one communicated this to worker, who was at home when I called. I had to leave and then come back to meet her there. I was then asked to unlock the store, while she sat in her. Older lady, so I didn't mind at all, but then had to dig through filth on the floor to find the key. The place is very unsanitary.

I was very happy with the service I received. I was scheduled to pick up the truck by 5:00pm - but I got lost, turned around and just plain pressured to get there by 5:00pm. The lady who answered the phone was so helpful and wasn't too worried about our time factor even though she said he liked to leave at 5:00 because it gets dark early. We didn't get there until around 5:30-5:45; and I thought they would have closed, but he waited for me to get there. I was so relieved, and he didn't act like he was angry or put out because I got there so late. He didn't rush the check out process, showed the mileage, showed where to put the key, etc. I just wish to say a big THANK YOU! Not to many companies would have waited.

The previous renter left a beer can with a little beer in it & it spilled while I was driving that left a beer smell in the truck. The rental experience was very good other that.

The service agent was very sweet and kind, however uhaul.com messed up my order

They overcharge your acct after rental is returned

There was no key drop box (contrary to what they said) so we called GO-UHAUL who told us to leave the keys and contract in the glovebox and lock the vehicle doors. They said they put this all in our file. We then received a rather rude call from this location a few hours later asking where the keys were and they were upset with us about what we had done

Willard was unprofessional referring to me as baby and stating that my face revealed to him that I was not a patient person....The air conditioner did blow but the air was not cool

Have personnel capable of determining which trailer is necessary for a Scion FRS. We were sent to MLK by Gulf Freeway to get thee proper trailer. MLK did not have it. They removed all the equipment from the truck they did have and required us to get the equipment from Gulf Freeway. They told us that we would have to contact the 800 number to find a trailer. We went back to Gulf Freeway and they discovered that any of the trailers they had would carry the car. We did not finish getting the truck trailer and equipment until 2:45 --- the original pick up was scheduled for 11:30.

The truck reserved was not available. I was charged more . The reservation process took an hour or more z

The location was in a semi-good neighborhood , but the actual office was the nastiest place I have ever seen in my life. Dead rat, cigg buds in the floor, all wood rotten, dust and smell. The place was surreal! No electricity, no good functioning printer. The lady at the rotten and putrefact counter was kind but absolutely a turtle. There was one lady infront of me, I waited almost an hour to get the keys to the truck. If sanitation passed by the location they would instantly get a heart attack, not kidding. This place is not good for Uhaul, its the worst marketing for ur conpany. Check them out for yourself. If any question feel free to contact me. The location was: 7446 martin luther king boulevard, houston tx.

The Staff is always friendly, knowledable, and fully equipped when i need them most. Thanks in advance, i will be using UHAUL again July 1st.

Had a 10am appointment to pick my uhaul up. There was no one there. The brother of the woman who rents the trucks was there but could not rent the truck. Then he told us if someone came with cash they would probably get rented to instead of someone with an appointment. My boss was with me and I was totally embarrassed. I then told her brother that we were going on an errand and would be back for the truck. When we got back around 11:30 she still was not there. Then she tried to tell me she was there earlier but decided to run an errand because we were not there at 10. We were there at 10. She said we should of called the number - we did call the number 4 times. Unacceptable.

The address on the site is incorrect. There is another MLK Blvd in Houston. This location is MLK, Jr Blvd..it was raining when I picked up the equipment and the place leaks like crazy! Manager was very nice but not much there to work with.