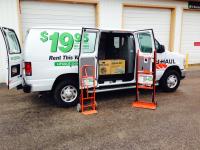 My pickup was changed from Ann Arbor to the 1809 Jackson location. Arrive at 1809 to discover this is on a 24/7 facility with no live person to speak to. Had to figure out where to go to complete my contract, though I did it online. Then and only then did I get the code for the lock box at the original location. There were equally bewildered customers showing up at 1809 when I finally got the truck. Make it clear where people need to go.

The Manager called and said I should bring my trailer by today and Dan would look at it. When I showed up, neither of them were there. I basically wasted my time and gas for nothing. I was working with Larry. He was very engaged in representing customer service UNTIL he learned the details of my visit. Then his entire demeanor, tone of voice, and willingness to help me changed instantly!!! Apparently the work that was done on my trailer isn't something that uhaul does, according to Larry. I asked him if that meant the 2 year warranty wasn't any good. And contrary to what Dan told me, I could get the trailer fixed at any uhaul location, is no longer true. That was the ONLY reason that I purchased the warranty, so I could get my trailer fixed at a different location if I was no longer in Jackson. I feel like I've been scammed. Granted, I will be able to get my trailer fixed, I think, but I'm extremely disappointed that the 2 year warranty that I PAID FOR, is only good at this store! I've used this location several times for renting trucks or trailers when I needed to move something. NEVER AGAIN!!! I'll drive out of my way before I give money to this store again. I was lied to, deceived, and treated like I didn't have a valid problem. Here's a suggestion. Don't warranty work and lie about it if the company isn't going to honor it. Don't do a half-ass job. Don't push the problem onto another employee and make the customer feel like crap. Nobody likes to hear the response, "Nope, can't help you cause they're not here". I couldn't leave a note, message, or anything. It was already a big inconvenience to Larry, and then he had to dig for Dan's schedule, which made him even more annoyed!!

The 2 male employees working at the time were wonderful. The owner was awful!!! He said the furniture blankets were in the truck as he put them in there himself. His attitude was less than customer friendly. They were not - we had to pick them up the next morning. The experience of picking up the rental was a nightmare, but the 2 gentleman were terrific about fixing everything.

once again, your website sent us to the wrong address. They had moved two months ago and had to go to another location. Your mobile app will never be recommended and I personally will never rent from your online service again If I ever use, I will deal directly with the location.

Truck was old but it got the job done!

Im highly upset ibe lost my mother whom was my bff. I end up having to move her stuff fem her home into storage needing a truck. I end coming to location and waa told if i needed any changes for me to call. Well i had one of my help get hurt end up having to call to see if it be ok if i be a lil late i was told no problem which she put in turning in at 5 i was 20mins late. I got charged for another whole day which i was just told i got 7days to pay or its 30 more dollars thats goin be added. Im upset cause i was told and ahe put in 5 i came turn truck in i made it exactly 5:20. Twenty mins late and put the gas back like when i got it. Now im still having pay more. And im not understanding why whn i got an ok frm when i call the office. Not right nor fair period. And i deal with only uhaul all the time but dis makes u not to fool with thm cause its always SOMETHING. Very much disappointed to point i wanna talk to cooperate seriously and make a complaint.

Much longer ti get through the check in process than I would have expected.....and yes I did the online checkin prior to picking ulmy trailer.

Cab smelled like marijuana; felt sick when done; would appreciate a partial refund

Larry was especially knowledgeable and helpful.

PASS ON A HAPPY BIRTHDAY TO THAT HELPED ME CHECK IN. STAFF WAS GREAT AND FRIENDLY

Very friendly and knowledgeable staff. This is the second time in less then a month that I have rented a trailer from them, and they are excellent.

Make sure the trucks have been looked at by a mechanic.

The equipment was very clean, but not well maintained at all. The trucks transmission light was on the whole time, it had a tendency to sputter when stopped at a traffic light, had about as much power as a vacuum cleaner, and was generally a vehicle that should have been retired.

Update the outside of trailer, it looked very very old, the passenger tire was low air two times on my trip, if you looked at the tires the driver side tire looked new and in great shape, the passenger tire looked older which probably explains why I had to put air in it a couple times. However, the staff there at this location were SO ABOVE AVERAGE, 2 people in particular...Dan was so awesome, he installed my hitch on my car fast and it looks so good, very friendly and when I rented the trailer he hitched it on for me. And when I returned Kalise stayed over her shift in the bad weather day to help me unhitch the trailer!!!!!! We also discovered that one of the chains had broken at some point (scary)!!!! Anyways these 2 people are the reason I would come back to a business over & over, the trailer however....please update/repair it.

Pick up and drop off was convenient. Staff was helpful and knowledgeable. Rented a 10ft moving truck and was very clean inside and truck was in good condition overall.

Did not use the 2 doz. blankets I rented and was told I could not get a refund/credit for returning unused ...I thought that was a bit un-customer friendly, but really the only negative! I also sent an email to your customer service re this...not a big deal, just $12, but fell a credit would have been best for customer relations!

Unfortunately the trailer leaked and damaged our dresser

I had to scrape ice off the windshield - thick ice in places. There was no scraper in the truck so I used the scraper from my car. It's winter in Michigan and snow and ice can come along at any time, so I would have expected a brush/scraper in the vehicle, even if it had been clear when I first arrived. I didn't notice I had received a text about checking for damage until I had the truck about 2 hours, so it was too late to do anything - i was not told I would be receiving that text by the staff and they did not ask me to inspect the vehicle. Otherwise the equipment worked well and the default 4-hour time window for basic rental was perfect for me. The location is convenient and the staff was polite and courteous. . Checking in and out was easy and well-marked.

I don't know where to begin.. There is not enough space to type it all. It was a nightmare.. if you care about customer service please give me a call at 517 960 1710. Shawn Hamlin

I was given a truck that was too large for the items I mentioned when we booked it... costing us more money!

Everything went perfectly on both ends! Good 1-way rental experience.....