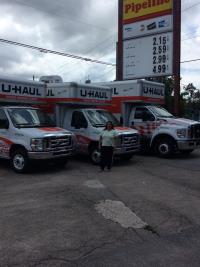 The uhaul was FILTHY and was also left on e I had to put gas in it to even drive it!

On the other day I looked at my bank statement and it showed that they was drawing out $91.?? And then my daughter called me on the next day and say they was charging my card $3??.??, I go on there and I see $231.??. What the hell is going on. I sweep that truck, put the gas above where it was when we had gotten it, and I return it before the time, so why so damn much. This is a rip off

This is the SCARIEST place I have ever been to rent from uhaul . Not a safe place to be. Trailer was full of trash and someone has been sleeping in it and it smelled of urine. I returned the trailer @ 4:30 pm the day before it was due back and I still don't have a email of my return yet. Dwayne Kelly

Explain in complete detail, what exactly will be charged if you do so and so.

I drove past several other uhaul locations to get to this one that had several homeless people watching me return the truck. I was also charged additional to drive more miles past other spots. I shouldn't be charged to handle U-Haul's logistics.

Shady, dropped off. Gas tank full, no problem. Get phone call 2 wks later from my credit card company. Someone From that store tried to charge the credit card that I had used to reserve it $767. Regional manager advised it was an honest mistake and had never happened before. Based on the reviews here and in Google It most definitely has. DO NOT USE THIS LOCATION.

Area is pretty sketchy, but the people were super helpful

Location was pitch black and unsafe. I did not take the trailer and you still charged me. Twice. I called and emailed and was told I would not be charged. This was a lie. Now I cant get anyone in the phone. Never again will I use Uhaul.

I've used this location 3 times and every tome there was an issue. The owner/who ever rents the out the U-Haul is never there. When the time comes for pick up it takes them at least 2 hours before they respond for you to get the U-Haul. Now the last time that I rented from them they gave me a U-Haul on E and I brought it back on E now they're saying I owe $28 for gas and I never signed anything stating how much gas is in there. I am very dissatisfied and I will not be using this location again and I would not recommend this location to anyone.

This was the worst experience ever they lied to me saying i was going to pay a flat fee of 79.80 they end up charging me 179.30. I was advised that they didn't charge for the mileage. I was told to come and get it from the Norwood location and drop it off there turns around I had to go on moncrief to a store where you have to stand outside to do business. I'm highly upset I was lied to and overcharged.

The only reason I came here is because they have 24/7 uhaul rentals. The customer service is good but the man was not there when I got there and I had to come back. The area is so bad at night and it was so many people scraggling around the store it was a bit uncomfortable but the process was quick and easy.

It was very difficult to even locate the door to get inside and start the rental process. Had to be let in by a delivery guy that happened to be there at the same time. Additional information before hand would have been helpful.

Train the store attendee to handle the uhaul trucks, having to wait while he gets in contact with the person who handles your vital information and sending pictures of your id over their cell phones is extremely uncomfortable. Not to mention them having to run your card info over the phone. I wasted an hour there.

Tell them to work on there customer service. Speaking to people very rude

This was the worst experience ever.i will never rent from this place again....

The location was in an extremely dangerous area; was verbally accosted before even reaching the building from the car. It is a large convenience store that literally doesn't even have a door--only glass to conduct business; had to be let in via a back room. THAT is how unsafe the area is. My original reservation was for a downtown Jacksonville location--how UHaul can send anyone where I had to pick up the truck and trailer is beyond me. Staff unfamiliar with the U-Haul computer system--took multiple tries to put my information in. There was a marijuana "blunt" in the ashtray of the truck, had to connect the trailer to the truck myself and the first trailer was BROKEN, and none of the reserved extras were present (furniture blankets, dolly). Cannot make this s$%t up. Horrible.

I ordered a large dolly for moving appliances and it was not there. I had to find another U-Haul location who I made my original reservation location with purpose and was sent to a location I would not have picked. The truck was dirty and smelled awful.

New location and ownership and workers

They automatically add insurance and miles to bill. I have rented many times and never encountered discrimination such as their practices

The reps english is limited & it took a ridiculous amount of time to finish up even though I completed most info prior to arrival..