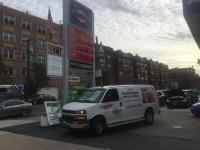 This was the worst experience ever. They forget to put the dolly in the back but they charged me. Also they charged me $2 rate per mile which clearly says $1.50 on the app

Ideally, the pick-up process could be a little faster, but I'm saying that just looking for the tiniest thing that could be improved. It didn't really take that long.

This location did a great job. Danny, the person who spoke to and helped us get the truck we reserved was pleasant and professional.

There was no personnel available to help at this location or time. I had to squeeze the vehicle in between three parked vans which made it difficult given I am not a licensed CDL driver. It wasnâ€™t convenient to park the truck as the space was boxed in. The whole experience was overall daunting.

Moving is hectic enough so I was delighted to have a pleasant, stress-free experience! Many Thanks to Danny and his brothers.

No lying to customers stating that you dont have other vehicles available for rent, when there were availabke at the time I went there. However, when I returned the at 6:25 p.m. on the same day, those vehicles were still there. So, in general, I ended up paying more money than that I was supposed to. That was a bad experience.

wasted 45-50 minutes on the phone with uhaul trying to sign into the app ... then they had the wrong van at the location so had to change it to the correct van and then before anything i made reservations for a closer area from my storage and it went through and ALL BUT no van at all available at the location... then to get back to where i was before they were switching me back and forth to the wrong department when all i wanted was to pay over the phone.....the app is HORRIBLE i had to call customer service sooo many time just to rent a van.....

Make the seat wider so that not only two people can ride with the driver.

This is my 4 th time renting van at this location ,cant think of much they can do to improve

Keep up the good work.

The steering wheel was shifting too much

Both of the gentlemen working were professional, helpful and nice. The van was clean with the appropriate amount of gas. Moving is stressful, but everything about my experience with this location went as smoothly as one could hope for! I definitely recommend it!

Truck was not clean, and the man on staff when I returned the truck did not allow me to put the keys inside the return box. He told me to give him the keys first, and he did not have a U-Haul shirt on. It was a unique and unprofessional experience.

The staff could not have been nicer and more accommodating but I could not get past the fact the van was filthy dirty and sticky everywhere, especially the dashboard and center console. If I was not in a rush I would have gone back and asked for it to be cleaned or for another van. I have never rented anything this dirty.

New 2019 Truck with a Rear Camera was great. Will recommend and use again.

I called to confirm the order the day before. I asked a specific question relating to a discount that I was given by an employee, when I asked about it the guy said yes when you come to pick up the truck you can enter the code. However, it just happened to be that the center would be closed on Saturday. But on Saturday the owner was in his car and when I spoke to him about the same discount he also implied that I would be able to input it at the time of rental. Guess what there was no place to put the code in. (btw I used the mobile app, never again!) A customer service rep using chat said the same thing but at the returning the truck the code can be used. However, when I returned the truck I handed the keys to the attendant went inside to talk to the manager and the kid had electronically closed out my rental before I could talk to the manager. And she said I would have to ask my friend. In which I did and she asked the GM which referred me to CS. I am not happy about this runaround and I will NEVER USE mobile again if I have a discount. On the other hand mobile rental was pretty easy, except for the taking my photo ID the app didn't want to take it.

GET THAT BLACK GUY FIRED FROM THIS GAS STATION! He was pumping gas; he said the gas station was closed even though we told him we had the truck share app. He said there was nothing he could do and sent us to another location. Finally after going to that location and calling uhaul to sort this out, we had to go back to this location, and when we returned, he said "I don't have to tell you anything" even after he lied and told us we could not pick up the uhaul at this location. Poor example of humanity here. Just an imbecile.Someone who just wants to harass you, even though he probably sees uhaul trucks picked up every day, and knows exactly how the lockbox works. DO NOT PICK UP FROM THIS LOCATION!

I don't even take the equipment but I was charged and I am getting mail to review. Worst experience if my life time. Was trying to call the customer care 4 time but was unsuccessful. Customer care is worst at its best.

Friendly staff and well-maintained truck. I will absolutely rent from this location again in the future.

Location was fine but had to wait 25 min past pick up time for our uhaul bc it was in another location.

I'm sure there must be something to say, however, I can't think of it at this time.