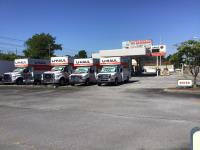 Every person I talked to did their best to help. The only problem I had is the phone system the company has sucks. I had to make several calls in order to find a line that did not crackle an drop words of the person trying to help me. It made the process slow. The amazing gentleman in Johnson City was having problems with your communication system to and was trying diligently to prevent me knowing this. But he still saved the day. Thanks Fred.

The truck I rented was not clean. It smelled of smoke and there was dirt everywhere. I had to stand 25 minutes in a cold convenience store parking lot because there was another customer. The store proprietor, who I was friendly and kind and I think was doing his best, completed my transaction on his cell phone. Nothing about the transaction inspired confidence except the friendly store manager. I would likely rent from the main store next time.

Nice people and nice truck. I will use them again! Thanks!

I was charged a deposit was told refundable. I was not provided copies of rental. When I turned in the 6x12 trailer I did not receive my deposit back.

The Uhaul store in Bristol, TN did not have the truck I reserved online so sent me to this gas station in Johnson City which is 25 miles away. When I arrived, Circle A Market told me they did not have a 15' truck reserved for me. A supervisor had to be called in. Had to wait for the supervisor to arrive. Supervisor told me that the truck was on site but had to be received into inventory before she could rent it to me. In the end, the truck I requested for 9am wasn't available until 1130am, throwing me 2.5 hrs behind schedule.

The person I worked with to pick up my moving van had no idea how to perform her duties. She had to call the manager/owner(?) to complete the process. This meant that I couldn't ask any questions or speak directly with anyone about my rental at the time I was renting the van. I was not allowed to park my car at the U-Haul location. This was very inconvienent.

NEVER allow "Veterans Are Us" to advertise as movers on your website again. They NEVER came to unload the truck. We did it ourselves.

The original location that I was directed to (Mounter Motor, 200 Waters St) was a closed business and vacant lot. I attempted to call the main Uhaul phone number buy I could not get anyone on the phone. I looked for the closest location from the App and the lady at Circle A Market as very helpful and a pleasure to work with.

It was a convenience store in a gas station that no longer sells gas. The people were extremely friendly and helpful however and made the process simple and painless.

Your curtesy and professionalism needs serious work. You need to understand the contracts well enough to answer basic questions like what am I signing for. I kept asking for clarification and the lady just looked at me and said do you want the trailer or not? I Just want to know How much I was being charged. Anyway, lesson learned, use official U-Haul sites, not the â€œneighborhood sitesâ€

The gentleman who rented my uhaul was so nice. He was a pleasure to work with. If I need uhaul again his kindness has gained my future business.

Covid related experience I'm sure. Staff friendly. Location okay. Window service only and a drunk in the parking lot asked me three times to buy him booze!

Very difficult to get a 26' truck in the parking lot.

The reps at this location didn't know the equipment well and were nearly clueless on setting up the rental and checking in the vehicle. They nearly charged me for the wrong rental, and would have if I hadn't caught the mistake. They also said I'd receive a receipt via email but I had to call to get the receipt. I was on hold for nearly 20 minutes when I called UHaul's 800 number. I also tried the online chat and no one ever showed up on UHaul's end. Piss poor and unacceptable customer service!!!

Nothing they were very nice to us! They did a great job with helping us!

When we arrived, the cashier couldn't locate the online reservation, told us the wrong amount for the deposit, and was rude to boot. We ended up having to take our Uhaul back to the original location instead of the location that was literally down the street because of the cashier's error. What was supposed to be a simple process ended up being a 45 minute ordeal. Moving is stressful enough and this situation put a damper on the entire day. If I end up renting a truck from Uhaul again, it definitely won't be at this location.

I chose to do mobile pickup because they said that all I would have to do was get the key. I paid for my rental & everyhing on my phone. When I got to the window the man wouldn't give me my key because he said he had to call uhaul & they had to confirm that I was supposed to get a key. I then waited 30 minutes for a person from uhaul to answer! I was on a time schedule & because he was late meeting me & had to â€œwait for uhaulâ€ I didn't make it in time to drop the uhaul off before they closed & got charged an after hours fee. I will never rent a uhaul from that store again. It was inconvenient and he was rude!!

Person at the counter seemed a little uninterested as to whether the truck came in or not. Rather rudely stated if no parking spot then they would not take it. Also we had to park the truck as they seemed to want nothing to do with it.

It does not seem like the location operator knew how to hook up the trailer and she did not give any information on how to load it. There was no pre-tow inspection of my vehicle like the website stated would happen. Lastly, the interior of the truck had a thin layer of dried mud and a bit of paper scrap. Poor customer service.

The staff at this location was awesome. I am so glad they were open on a Sunday for drop off. There was a drop off location much closer to my son's new apartment, but they were closed on Sunday and had a large gate that was locked around their property. I did not feel comfortable leaving the truck blocking the gate so I searched online for a different location.

We were misquoted twice and we were was told directly , twice, that the trailer we rented had a winch equipped. That costed us the amount it would of taken to pay for someone else to pick it up instead of two of us spending a full day doing it but oh well everyone was nice and the equipment was in good shape.

Just a little hole in the wall gas station. Had to unhook trailer and back truck into spot myself, but other than that the lady there was very nice and it was a quick process to get it dropped off.