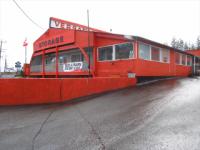 The Uhaul truck I rented smelled strongly like marijuana. I was warned of this upon pickup, and it is not the pickup location's fault. However, t would be nice if the truck was temporarily taken out of circulation and cleaned.

I was called the day before my rental and told that I would find the key under the passenger seat, that the vehicle would be unlocked. I found this to be somewhat strange as it wasnt what it said on the website but I figure every location is diffrent. I was under the understanding that you are generally able to call Uhaul and extend your rental time with the vehicle, and drop off at locations other than where you picked it up from. I had booked an In town move, but when I called to inquire if i could drop the vehicle off at a location where I was, 150 km from starting, the rep said it should'nt be a problem. She said the system wouldnt let her do it and she would have to transfer me to a supervisor. The supervisor was very confused and said that I my vehicle has not been picked up, had not been "dispatched" to me even though this was about 4 hours after I had collected the vehicle. I assured her that I had in fact picked up the vehicle and have been in it for the past four hours. She didint seem to think this was possible. She asked for my contract number. She had my file up already and new my name, phone number and other information, so I was really frustrated that she needed me to look up my "contract number" for her. I had my passenger find the email and rear the reservation number. She said that this was the reservation number, Not the contract number. I had no other email from uhaul. She said this was because the vehicle had not been dispatched to me and i wasnt actually legally able to be driving the vehicle at the moment, and were i pulled over i would likely be charged and the vehicle impounded. She was able to complete the dispatching on the phone, but required me to give my credit card number again, which makes me very nervous. I'm going to be watching my statements and If I am charged twice I am going to be very upset. I was told in no uncertain terms that I could not drop the vehicle off anywhere other than the origin point- that If i dropped it anywhere else I would receive a wrong delivery fee of 3 times the rental rate. I acknowledge that I did not book a one way trip, I did book a round trip, but the first phone rep confirmed what I previously beleived, that it is normal and typical for Uhaul to let you drop the vehicle somewhere else, but not for me, not this time. I am primarily upset that I was not actually issued documentation required to legally drive the vehicle. Furthermore, In following with what had been done previously, I put the key back under the passenger seat and locked the vehicle with the keys locked inside. Apparently thats not what the location was expecting as I received 3 phonecalls while driving the 2 hours back to my new place telling me I needed to bring the keys back. I was driving and was unable to answer my phone. I wasnt able to respond till after 5, but I did send an email so I do hope they are able to sort it out. What an you do to improve for the next customer? Let them know that they cant wrong destination your vehicles even though its usually allowed and that you dont use standard Uhaul key protocol. the rep was quite surprised when I told her how I had been called and told about where the key was in the unlocked vehicle. Issue your customers the documents required for them to legally drive the vehicle.

Only issue I had was they requested I pick up the vehicle a day early since they were closed on Sunday. I agreed as they said I wouldn't be charged an extra day. After I picked it up, I got a msg saying I had to return the vehicle on Sunday which is the day I actually needed it. Called 1-800 number and the lady said it was taken care of and I wouldn't get charged an extra day and I could return it Monday as originally planned. Went to return it Monday and the system tried to charge me for an extra day. Overall good vehicle and service but your system for situations like this did not prove up to the task. This really is something that needs to be looked into.

I rolled in with no notice at the end of a bicycle tour and within 15 minutes I was set up with a one way rental van. Staff were extremely helpful accommodating.

Wonderful service from very personable people. I highly recommend this facility based on cleanliness, customer service, helpful advice, and accessibility. Thank you so much

They should have Product knowledge. They should go with you for truck inspection.

Interior of truck was very dirty

The truck had a strong smell of cannabis. It was disgusting.

Nothing wrong here, the staff was wonderfully pleasant and came out to greet me the instant I pulled up. I appreciated all of their care with my minor complaints as well.

Clean the truck before renting it. Especially with a $25 cleaning charge

Its was a awesome experience with u haul !!!

Nothing, the lady that helped us out was fantastic need to have more staff with her ability and knowledge.

Ensure the cab is clean prior to renting it out. There were cigarettes and garbage on the floor. Fuel reading was taken while truck was parked on a hill which gave it a false reading. Once on level ground, fuel level was much less that originally indicated. I was charged for additional fuel. Front tires on truck were in very poor condition.

When we dropped off the truck they were friendly and helpful. I would definitely use them again

I've rented from this location a few times and they are always so friendly, helpful and accommodating.

Nothing! It was awesome!

The representatives at Versatile were super cheerful and helpful! I would definitely recommend this location again. The best Uhaul office I have been to yet. Thanks!

All a good experience

The address for this location is somewhat deceptive. Obviously the location cannot be on a national freeway and was actually on an adjacent parallel running road.

Very friendly and helpful staff. Easy changes at the last minute to accommodate us. Great people and customer service!

He had to wait approximately 2h to get to the counter. I think they should had a line up for people that had reservation and another one for people that didn't. When I got to the counter they told me that they didn't have a truck available for.( I call to confirmed everything the night before since I flew from Kamloops BC in the morning). There is more to this story but I won't go in too much un-necessary After a couple back in fort they send me to Chestermere. I was supposed to drive back to Kamloops the same day but I had to leave the next day because of the delay. The service was not bad but they should had better logistic and explain to people why they had to wait for soooooo long. Specially people like me that flew to get this move done.