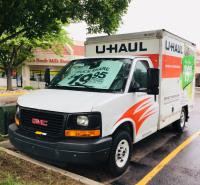 When I arrived the van was not parked in the location I was directed to by the online check in. Additionally, the keys were not in the lock box for pick up. The front desk attendant was a young man who had nothing to say other than, "ya, here, it's parked out back." The van was not clean when I picked it up. There was dirt and grass in the back. The front had a sticky substance on dash and in the cup holders as well as pet hair from an previous occupant. It was clearly not cleaned between users which is shocking considering the current pandemic. The vehicle is also due for an oil change. When I tried to let the online drop off know the vehicle was not ready for its next user, I was automatically going to be charged a cleaning fee so I was forced to put that the vehicle was fine so I didn't pay for a mess I didn't make. Overall a very poor experience.

The equipment was sub par should be retired. The customer service was lacking for uhaul knowledge and ability. I sent an email to uhaul through your site as I am filing a complaint about the customer service from Uhauls main CS Department. I was treated like crap and the last 3 times I have rented uhaul has been more than disappointing.

This was my worst experience with Uhaul. The so called attendant had no idea what to do or how to do it. He called his boss, who told him apparently to have me disconnect the car hauler. He had no idea of what to do with it. They apparently didn't check it in, in a timely manner, as I was called 3 days later and asked where the unit was. I am a former Uhaul agent from a 30 year dealer. He would of fired me if I ever handled a transaction for him in that fashion.

The gentleman who helped me with the rental was super efficient, kind, and well mannered. I appreciated his assistance.

Location charged additional amount a full month after the return when I did not exceed allowed mileage or return late.

The location was in a liquor store that needed a good cleaning. I realize the weather prior to my rental was not conducive to a neat store but the floors were dirty and sticky. When I picked up the truck the store's printer was not functioning so the paperwork was transmitted to my e-mail address. I asked which truck was 'mine' and he essentially said, "Look for the number near the front of the truck." I couldn't find any numbers that matched the key ring so I took the truck that opened with the key. Unfortunately I could not open the paperwork, but that is not your concern. Still paper in the hand would have been better. When I returned the truck the store clerk (not the same one who checked me out) had difficulties calculating the charges. I photographed the odometer at pickup and return and there was 30 miles different. She initially charged me for 60 miles of travel. She gladly made the correction, but the error should not have been made in the first place.

Protective moving pads ordered online were not in the truck. Uhaul location told me to go to a different uhaul location to get them if I wanted them. So much for the uhaul guarantees. Truck was also dirty, had to sweep it before I could use it.

The cargo van was dirty and was parked far. It was not even accessible to perform the check in properly.

Drop off instructions didn't say it was at a Dairy Store. Clerk was okay.

The woman helping us was really rude. She wasn't very transparent. She didn't tell us we had to fill up the tank or tell us where to park it. I will be going to an actual uhaul location next time

I do not want to be negative, but this location should not even be in business. From wrong phone numbers, to not having the items ordered on-line, being sent to another location, and not getting any discount for any of it was very upsetting. I also was not the only customer having a terrible experience. It was several others in person , on a busy weekend. Keep in mind this is only ONE DAY out of the year. Horrible experience. I recommend visiting a location prior to booking, and having the details worked out through a legit UHaul storefront. Best, ---D

Go over to the Highlands Ranch location and learn how to do things right, like cleaning vehicles and treating customers with respect and courtesy. Also figure out how to check in a vehicle without charging the customer 4x's the amount. Otherwise, just quit doing UHaul services at this location, because the whole experience was the worst I have ever had with any business ever.

The attendants gave me a truck with a nail in the rear driverside outside tire. They didn't do any preventative or maintenance checks before sending me on my way. When dropping off the truck after having had to use roadside assistance, the attendants said it was neither theirs nor U-Haul's responsibility to check for flat tires. I was paying a team of movers hourly to help me move and because of the flat, we had to extend the move by an hour costing me more money. Had the attendants been properly trained to do their checks on the trucks, I wouldn't have had to pay the movers for an extra hour. The owner of the station did not take any responsibility.

I wasn't informed of the location change until I got to the Uhaul office in Highlands Ranch. I also did not receive a dolly as I had requested and paid for.

The store owner/manager at this location was exceptionally knowledgeable, helpful, and friendly. I did have a problem with the online customer service when I called to extend my rental by 2 hours. I had been given the 10' truck for $19.95 per day. I picked it up at 12 noon and said I'd be done by 4pm. It turned out I needed it until 6pm. When I called to say this, they immediately said they charge me for not just one, but 2 full 24 hour periods! And that was that...no bring reasonable. The local store owner changed that for me back to the one 24-hour period (since I only had it 6 hours!)....and I was once again a happy customer!

Clean the truck up a little and replace cracked windshield. It's not in the drivers view but still shouldn't be there for a rental truck.

The young man was very polite and helpful. He's a good employee that you don't want to let go.

Great location. Easy in and out