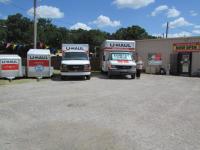 I was told that it was $59 total. This email is a complete surprise to see that it is double. I wish I was told the truth from the beginning.

Very easy in and out. Everything worked out very well.

worst service ever! everything was done previously on line but had to wait 45 mins for my truck and tow dolly. when I told him I had men waiting on the clock to load, he said "NOT MY CONCERN" finally got hooked up and gone, loaded and then saw on bank app that I was charged 2X by u haul. I called and same man refused to believe or hear me. He was yelling into the phone. He said "NO I DIDN'T" I have been trying to reach U HAUL to get it straitened out for 2 days. on hold for long periods of time. I guess because it was a Sun. and then Mon. was a holiday. Going strait to my bank and see if they can get my money returned. I am not going to go to location in Manchester and get in fight with the person representing U HAUL! Obviously he is a hot head and very rude. This was an obvious mistake anyone could make but he went off and acted hostile. He refused to check it. This move is a 2 truck and 2 tow dolly move, but the second truck will not be from U HAUL! and we arranged for movers to help unload at other end through U HAUL's on line services....no call,no text no show. But the movers have my credit card info! Better not have trouble there. NOT rec amending U Haul services ever again. Truck was good and that's it. too much added stress to a long distance move.

This location did nothing but give us the trailer number and our paperwork. They made us attach the trailer to our truck, and hook it all up. It took us over an hour to get it attached. They offered no help or advice. To improve for the next customer, the dealer should be required to help their Uhaul customers.

Gas was apparently not completely full when I picked up since I drove a short distance. People were hard to understand and rude. One lady there who knows what she is doing that is all.

Make sure that the gas gage is matching paperwork. I had a problem and was highly disappointed

We picked up the trailer at 9am, one person working checking out gas purchases, snack and drinks, U-haul paperwork(Computer) and the Greyhound bus was picking up people. Lots of things going on and only one clerk. Had to hook up the trailer ourselves no explanation etc...

They was very rude. Nobody was available to help at my appointment time. I was charged insurance when I told them I didn't want it. Will use Uhaul again but not at that location.

This location was awful. Employees could not speak very well English and were extremely hard to understand.

There was no where to drop off key like told there would be. We had to use the app. When we went in to ask for help, the guy at the counter tried to tell us we had to pay another $350 to HIM to leave the truck. My husband told him NO...we had already dropped it off through the app & just needed to leave the key! VERY unprofessional behavior throughout. WORSE experience this whole process. NEVER had so many issues. My husband sent in a compliant from all of our issues and we got a $20 coupon for our many problems. What a joke! We won't be using uhaul again. We were a long time costumer! THIS just finished off our long day!

I had no problems with the employees or anything my rental had a leak in it however we did not know until we had everything in the truck and was at our new location where it was raining.

Online it states that this location closed at noon. Returned trailer at 11am and was told no one would be able to check the trailer in until sometime after noon but to leave the trailer. Returned after noon to pick up the return deposit and they made a big deal about rehooking trailer up and moving it to a different location.

Quick, efficient, service and well maintained and clean truck. Absolutely would recommend this location for your local rental.

Mike was nice and professional. The lady at the convenience store was also nice. The rental experience was fine. The only problem I had was the online reservation. I reserved the trailer for a time when the location was closed, requiring going back a second time for the trailer and readjusting my schedule for delivering furniture I had sold. Not a huge deal, but the website should be corrected. The folks at the center got a call from UHaul when I reported the discrepancy between the website and the store hours. I hope the employees do not receive negative feedback - the issue was not their fault and they were very professional and courteous.

I arrived at the location approximately around 3 pm a day early, parked the truck where I thought was out of the way by the other rental trucks and went inside. I told the lady inside that I needed to turn in a rental truck. She took the key and I think she said ( not very good English) come back in an hour, the guy who takes care of it wasn't there. I reluctantly left ( dumb on my part ) and returned later but not before video taping the truck and it's condition. I washed the whole front of the truck, wiped the inside down and swept out the back. When I returned, the guy was there and said he didn't have time to give me my receipt to comeback the next day. He also told me that I parked the truck in the way and that he had to move it. He parked it next to a busy highway. I told him I either wanted my receipt or the keys back. I had 18 rented blankets in the back and didn't want to be responsible for them parked in an unlocked truck by a busy road. He very rudely went to the truck and looked at the fuel gauge I guess but that was it. He didn't even walk around the truck to see if there was any damage. He walked back in, printed off a receipt and said here. He didn't sign it or ask me to sign it. Very poor business. Will not rent from or return to them again.

Had problems checking into this location.Had to call customer service and they got me checked in.

Easy to work with. Smooth transaction.

Didn't even come & check out anything.Ask for a receipt & he said no it's ok. Couldn't speak good English.

Drop off location was friendly, however slow and required I offload the trailer, did not even look it over to make sure I cleaned it out. (Do not worry, I did.)

This is more of what people expect when dealing with UHAUL, Professional, Courteous, and Considerate