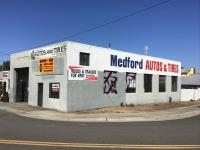 I was severely over charged on the rental. 4 days of rental, $14 for insurance and fees plus mileage of $50 dollars should have been around 177 dollars. My bill was well over 200 dollars. On my bill no extra charges were shown..

Truck was dirty and had been backed into a fence at the site and had damage. Representatives refused to acknowledge damages and just said â€œdo you want it or not!â€. Very rude and unhelpful. I recommend that no one ever uses this site.

No charge for being early

It would be nice to have a restroom available.

The area was atrocious!! Cup de sac of homeless people. Industrial area with lots of barbed wire and trash. Then they charged us a late fee for and coverage insurance because we had to drive to second location because closest location wouldn't take the truck.

No customer service. The place is like driving into a transients camp. Not sure who to talk to. No one to be found. Finally found the employees/ owner out back doing tires. Answering the phone list would help.

Would've been nice to know ahead of time that nobody was going to be at the office and I'd have to wait like 30 mins for my application to approve. Put a huge wrench in my plans and affected not only my schedule but my 10 other friends who were arranged to help me move. There were tons of homeless people sleeping within feet of the U-Haul location. Did not inspire confidence, not a pleasant or easy experience.

Vehicle was not clean inside or out. You can tell it's been smoke in as there were still small amount of ashes. How many uhaul locations do you need? It's like 7-11

Proprietor "Moon" proved himself a liar and a thief. Even if the area weren't sketchy with homeless layabouts, it does U-Haul absolutely no benefit to use his place of business. I would rather rent from an out-of-town location than ever deal with Moon again.

Personnel were fantastic. Located at end of street where it is a haven for homeless at that end. Business had no homeless there just close by. Made wife uncomfortable.

The location was full of transients, homeless that were verbally confrontational. We couldn't have our family members get out of the vehicles. The truck was cleaned out, the rented blankets were put into the cab. I received a invoice for $25 for them having to clean the truck. This is totally unfounded. There were 5 witnesses as to the cleanliness of the truck when it was dropped off. We are requesting that $25 charge to be removed! Due to the corona virus no one was available when the truck was dropped off...

The person who checked me in had difficulty processing my return. He put me on the phone with the manager who said he would email me a receipt. Not set up to take returns in my opinion.

This was not the original location we had a truck reserved at. Somehow our reservation was changed. When we arrived at the location. No one as in the office. I called out numerous times, looked through the building and found no one. After over 20 minutes an employee walked in from outside. He was courteous and we received the rental. I checked the truck and confirmed the damages on the form supplied. I looked briefly in the cargo area of the truck which appeared clean. Unfortunately I did not climb in and check everything. When we started loading the truck I found the overhead storage area had dried dark reddish goo all over one corner of the truck. The stuff resembled dried blood. So this part of the truck was not used. When we dropped the truck off in Pennsylvania I pointed out the substance to that dealer.

Even though I was frazzled, they got me on the road. When I got to Salem, they said they put the freaking belts on wrong I could have got very badly hurt, are you guys kidding me, I put my life in your hands!

We were lied to about the fact that if we returned it with more gas than it had (which was empty!) We'd get a credit. We received nothing!!

I requested a 5X9 Motorcycle Trailer. When I arrived I did receive a 5x9 trailer but it did not have a wheel chaulk to hold the front wheel steady during travel. In the past, motorcycle trailers have always had this feature. I drove from Oregon to Georgia and had to readjust my motorcycle at least twice per day.

The online ordering and turn in have to be hands down the worst and most frustrating experience I have ever encountered with U-Haul. I wouldn't recommend this location to my worst enemy. It's in a less than ideal area of town. Homeless and transient people we just hanging around and watching our every move. It was very uncomfortable. The gentleman working inside knew nothing about how to pick up the truck. When we dropped it off he said we were good to go but I still got a reminder email to turn the truck in two hours later. With no way to turn in online since we no longer had the keys or the ability to take a picture of the miles, who knows what we will be charged or if the truck was even marked as turned in.

Great price and easy to book on line. Very good updates on trailer status. The trailer was ready when promised but the location kept changing the days before picking it up.

The equipment I received was functional. There was some damage that did not effect the integrity of the trailer. The rubber seal around the rear door was in poor condition and should have been replaced. Fortunately we did not encounter heavy rain and non of our contents got wet. Otherwise the equipment worked fine

The location was not attractive. The building was old, very hot, and did not seem well maintained. There were a number of street people across the road. The trailer itself, though clean, was well used. The Uhaul attendant however was very friendly, knowledgeable and efficient.

Very helpful personnel. The place is tiny, but other than that dropping off the vehicle was easy.

Nothing the rep was fast friendly and efficient.

This was not the best neighborhood. Homeless sleeping right next to the trucks.