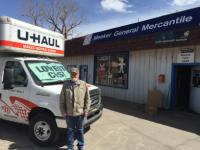 Jason at MGM should not handle your business. This was a complete mess and managed to charge me twice for the same trailer and the costs weren't even the same. He didn't even finish the online check in which caused this mess.

My original reservation was for eagle co ended up having to run all the way to meeker co witch is 100 miles one direction. Got to meeker and was told the guy wasn't there to rent me the truck. Ended getting the truck at 2pm Drove all the way back to eagle to pack. Drove all night long to get to Salt Lake City. Unloaded the next day and returned the truck on Monday morning. After I got home from returning the truck I got a call from the meeker Colorado location telling me that I was driving a stolen vehicle. I ended up getting charged on my card twice for the rental.

The person checking us out was awesome, friendly and super nice.

I was supposed to pick up in New Castle, and day before I was expected to pick up truck 1 hour and 5 minutes away from home. Pick up location had several cats, very unclean. Nice guy helped us with our truck and rental agreement.

Our only comment is we didn't have time to drive 1.5 hours to pick up the trailer we had ordered in Craig. Even those the location was fantastic, it was out of the way.

I had to drive from Craig to Meeker to pick u the AT. It should have been brought to Craig for me. This ended up costing me another day rental charge and a 1/2 day of my time.

Jason is the best U-Haul franchisee or however you structure at that I have ever worked with in over 30 years of working with uhaul thx!

Truck had no oil..we put it in. Passenger door wouldn't open and we had to drive 90 miles to pick up truck...,45 miles each way. We were told we could pick up truck in our town....didn't happen. Wonderful, kind ladies at the drop off location.

Reserved a 6x12 utility trailer 3 weeks before arriving and this was confirmed.. showed up and they had a 5x9 and was told that's what happens.. total BS move by Uhaul and had to change my plans for the week while in Meeker. Not sure why you would have reservations if you can't help your customers with what they need. I will make sure all of my friends and contacts know how unhappy we were with this!

Organization. More communication between third party uhaul stores and the regional prople that make the reservations.

Need to be a little more organized..They were late in getting me checked in by 30 minutes..

The folks at Meeker General Mercantile were great!

The truck was relatively new but was not cleaned on the inside. They did not have the two dozen blankets we had ordered so we had to get the second dozen from South Bank Storage. Also, and more importantly, we had to drive to Meeker, CO to pick up the truck when we had a confirmed reservation to pick up the truck in Rifle that was several weeks ahead of the pick up date. U-Haul should attempt to move trucks where their customers request to pick them up. This was a big inconvenience in time and money.

I ordered a Uhaul truck and storage unit 2 plus weeks before pickup and move in. Uhaul called to report that I would have to drive to a location 2 hours away 48 hours prior to pickup of uhaul truck. Emotionally disdraught and beyond frustrated...I called around to find a truck an hour away instead of 10 minutes away. Then later the same day Uhaul called to report the storage unit I had rented was double booked and I could pay more for another unit. I was speechless and upset then called an hour later with a Uhaul rep to find another storage unit which was 20 minutes further and at the price that fit my budget. The UHaul people I spoke to were always nice. The cost of emotional distress, having to drive further for truck, and locate truck and storage unit was disturbing and set a low bar for business standards and customer service. Last time I used UHaul, 2011, the cost has doubled. I hope not everyone has a story like mine and their move had good outcomes.

The location was fine, but your reservation system is horrible!!! I made a reservation for a particular location in advance so uhaul would have time to accomodate and it wasn't done. Also, when the person called to confirm my reservation, they didn't tell me it was for another location that I didn't request. If I hadn't glanced at the email uhaul sent me I would have gone to the wrong location. Called reservations and it took forever for them to fix it. FIX YOUR SYSTEMS!

It was just plain easy to return the vehicle and the trailer. There was a drop box for the key and contract info, and the place was easy to get into from the street. Thanks!

Great guys, did paper work timely, got trailer hooked up for me, and was out of there in no time.