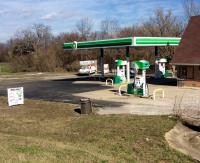 If you don't have a cell phone this location will not work for you. Everything had to be done though that.

There was really no clear way to know where to leave the truck.

I did a 24/7 pick up. Its suppose to be a easy transaction. Worse thing I ever did! There was no one there to help you. They dont give you directions on how to get the lock off of the truck. The chat didn't know either so of course I had to call 2 different times. Long story short this quick easy process took over a hour and 30mins which cut into my movers time. Worst part when you have a customer service rep on the phone you conveniently get disconnected and they dont call back.

Small gas station easy access to freeway. Gas station included party store with bars on the doors. The man who was the clerk was a little difficult to understand. Connection on his cell phone was very bad. Not sure if it was his service or an issue at hertz. This location was not my original . Very disappointed no one contacted me to inform me the original location did not have a truck. My assistant in my office had to help arrange a new location.

The guy who runs this operation doesn't have the necessary equipment to handle rentals. I had to complete my rental over his personal phone because he told the CSR his computer wasn't working. It didn't work because he didn't have internet or phone service in the store. I'm also upset to have paid for insurance that didn't cover the damage to my tv it was supposed to have covered. I will NEVER use or recommend UHaul to anyone, ever. I also didn't have a full tank of gas as promised but still returned the vehicle with a full tank.

This staff at this location had no idea how to process the uhaul request. In fact he handed me the laptop and made me do half of it. It took 45 minutes to even get the trailer I requested. The trailer was in poor condition. One of the straps was so rusted it could not be used. The tires were in poor shape and the trailer tongue barely worked properly. Upon dropping off the trailer, we parked it where it was located before and the same staff member ran out and asked us to reattach it to our truck and move it to a different location. I will never rent from this place again.

After a confusing start, the staff member got things going and turned out to be a really nice guy. Small location, and they had the large size fleet trucks there..

Staff are friendly and courteous and make process easy.

The truck was clean and fueled up, ready to go. The agent was friendly and helpful as well.

speak and understand English better, have more than one person working, its a full-time gas station with a part-time U-haul business

We booked a truck in Georgetown and were told to go to Midway to pick up the 26 foot truck. When we arrived there was no one available that knew how to process UHaul transactions. We had to call UHaul, after I had already used Express check in and paid, in order to be given access to the truck. We had paid for furniture dollies, furniture pads, etc, and none of that was available. The whole ordeal was absurd. We would never recommend this location or UHaul to anyone.

The store owner couldn't speak English very well at all. She ask me to go check the mileage on the truck when we dropped it off.the store owner tryed to charge me 96.o.o DOLLARS then it went to 74.00 and then it went to 60.00...we live in Georgetown and Uhaul sent me to Midway ky witch was 18 miles out of my way. And I was charged 69 cents a mile for that as well....We wasn't happy at all today with this.

Website expressed 10 am open on sunday, they open at 11 and arrived at 11:10, took 45 minutes to complete the transaction i had done online. So 2 hours wasted, people moving dont have 2 hours to waste.

The truck had dirt, broken glass, and trash in the back of the truck. Had to spend an hour just cleaning it before I could use it to move. Even after the smell was really bad and all my stuff still smells of the back of the truck. They also charged me $50 for gas, even though I had filled the truck up past were it was when I got It.

Have the reserved trailer available at the dealer that it was reserved at! This was the 4th place we were told would have the trailer for us.Our experience was VERY disappointing!

I called the phone number several times and there was no answer. When I got there, the employee was not even in the building. I was at this gas station for almost 30 minutes picking up the truck.

Location was not able to enter my credit card information when I picked up the truck so I wrote a check. I returned the truck after hours and used the UHaul site to process the return. uHaul site said I was due a refund and I could get the refund from the drop off site. I went the next day to get the refund and the drop odd location couldn't access the UHaul site to see my return records so they couldn't process the refund. I was going to have to call another employee. I left and immediately called UHaul and had UHaul issue the refund check. If a site had limited computer access and staff trained for processing UHaul rentalss they shouldn't be a UHaul site. From now on I will always stick with my preferred site of Southern Rides in Frankfort. I will never use the Midway site again.

Was told truck would be at 1 location and it wasn't. Had to try 2 other locations before the truck was found. Never contacted by uhaul to let me know where truck was actually going to be.

I will never rent from Uhaul again. Worst experience I've ever had to deal with when moving. I was notified that my truck would be at a certain location after requesting a different one, which I understand, it's a preferred pick up location not a guaranteed one. After confirming with the location that my truck would be there, on the day of pickup we were told that they didn't have our truck nor did my preferred location have my truck. After calling customer service I was told that my truck had been dropped off at the wrong location and I would now have to pick up my truck at a 3rd location that I was never notified about. Therefore I had to contact my moving help and let them know that the job was not going to start on time. Also after completing my order on Uhaul's website I was told that my order qualified us for a free month at a storage unit. I selected the location where I would like to keep my stuff and selected a storage unit as well. Once my husband arrived at the said location he was told that they did not have any available units. So we were forced to take our stuff elsewhere and had to pay after we were specifically told that we would get a unit for free. Uhaul is awful, I will make it a point to tell everyone I know not to use your services. I had heard bad things in the past and I am extremely regretful that I did not heed their advice.

Paul, the uhaul rep absolutely decline to cleanout the truck and remove the filthy furniture pads. Both the inside of the cab and box of truck leaks, especially the cab. This location did not have the appliance dolly that I requested. This location has only one individual that will answer any uhaul questions and if he is not on the clock, he will not pickup the phone untill ge is clocked in even though they claim to open up at 7am and uhaul clientsare trying to reach them to confirm that they actually have the truck on the lot. He did not have the paperwork for the customer to identify all defects on truck before accepting vehicle. He dropped the keys on the counter instead of handing them to me because I explained to him how important the appliance dolly was. He didn't have any dollies.

owner was very rude did not want to rent because it was sunday but we had rented over the phone thru uhaul. gas was supposed to be on 9/16 of a tank but was only on 1/2 tank, the owner tried to say i lied about the gas but i told the clerk at the station before i left.