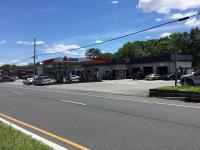 i requested another location and it was switched to this one Moving blankets and hand truck pre-ordered were not included Uhaul should honor requests based on prior experience with locations. Hard to believe a standard 10' truck was unavailable at requested site

This location does NOT have an official U-Haul office or personnel, just a gas attendant that also act as a rep. No proper paperwork was involved upon returning of the rental equipment. The guy just took 2 pictures, one of the truck and another one of the instrument panel showing the odometer and fuel level, and said an email will be sent out later. The customers just have to rely on his words and hope for the best..

Dumpy unsafe location. Key box nailed to knocked over post buried in the grass off the side of a crappy gas station. No cell service to â€œonline Drop offâ€ and person on site could only mutter â€œgive keyâ€. Ended up having to call Uhaul because he just left truck sitting there and never bothered to check it in.

I booked this weeks in advanced and am never notified that the Pick up location changes to be 50 MINUTES AWAY FROM ORIGINAL! I was then forced to take a $110 Uber ride to pick up the truck. The simple lack of professionalism and any common sense to maybe give me the heads up â€œYour pick up location has changedâ€ in an email. Instead, it is almost like you were hoping I wouldn't notice. Overall super pissed at the entire process. I will certainly not be using this bullshit again.

This location was unacceptable. It was an abandoned gas station. It was not welcoming or inviting and I felt unsafe the entire time. We also got told we were getting charged extra for dropping our truck off there when it was the location provided to us. Again, we will not use you again.

Small area and no formal building but easy, convenient

Requested dollies, was assured over the phone by uhaul that they would be there. However when I arrived they did not have any and I ultimately had to move everything individually by hand. Also pick up and drop off locations were changed by uhaul after selection.

Considering the current status with all the restrictions in place, UHAUL made my move as simple as humanly possible. Job well done!!

no building. meet the guy at the gas pumps.

Charged me an extra day when I returned the vehicle the same day. Was also charge incorrect amount of miles. Vehicle was clean and the location isn't bad but the service is poor.

Very unprofessional. Pick up was very disorganized. I had to do it all online while the gas station attendant watched you tube on his phone. Once the site said get the key from them he acted as though he had no idea what I was talking about. He finally called some one. Waited over 5 minutes for a response from whom ever he called. Then he had to rummage trough all the garbage and old receipts on his desk to find the key, an additional 5 minutes. Upon returning the truck he just shouted and pointed in the general area to park the truck. He took the keys and said he will check me out with pictures. He repeated that I was all done and good to go. Only to get a call from uhaul the next morning saying the truck hadn't been returned yet . Truly a miserable experience. I will never rent from here again.

Directions to get my vehicle we're unclear for the after hours pickup. Gas station attendant had to make a phone call to someone, who didn't answer. I ended up needing to wait 15 minutes or so for him to call back before I could take the truck. When I returned the truck (over an hour early) it was not correctly documented and I was charged for keeping it until the next day. Uhaul did return my money, but it was definitely a hassle.

Don't use that location

Took over an hour to pick up vehicle that was prearranged for a 9:30 pick up. At check out they had no idea what to do. Said just give them the key Called haul before leaving to confirm I had just drop off because of confusion. Uhaul than bills me for an additional day vehicle because was dropped of 15 min after 6 hour limit . Arguing with uhaul that the place delayed me an hour in the morning. Now I need to wait 2-3 day for them to investigate? Told I haul I have proof on my phone with multiple calls to uhaul with time stamps Very unaccommodating and borderline rude on the phone. I would never recommend this uhaul location and doubt I would use uhaul again

i returned it the same day but got charged for 4 days. i want my bill corrected

I was first told by U-Haul customer service that this was NOT a Truck Share 24/7 location despite that my reservation had been moved here without my knowledge. After then changing to a standard reservation, it was not clear with whom I should speak for picking up the key. The truck that I was told was mine was not the one given to me. A different U-Haul customer service representative did tell me that it was a Truck Share 24/7 location, so it was a very difficult process picking up the truck. Also, the dolly and furniture pads that I reserved were not in the truck.

Terrible pick up experience. I told the guy my name and 10 minutes later he handed me keys. He applied safe movers $17 charge to my account, even though I did not ask for it when I made the reservation and he did not ask me if I wanted. I also was not allowed to check out with my app. The guy here said the tank was full, when it was only 3/4 full and when I then returned it, I had to pay extra money to fill it back up. So sketchy. Bad experience.

Gas station attendant/dealer was completely useless during all steps of the process and did not provide any answers to any questions. It seemed that he tried to tack on fees I did not ask for, and he was very dodgy. Apprehensive to work with uHaul ever again (and will need a lot of trucks coming up), and have already discussed with my business partners the fact that I will never be returning to this location. HOWEVER, truck was clean and almost brand new with only 30,000 miles -- a prettydamn nice truck

You list the location as Gasco. It's actually a Citco service station with no U-Haul signage on Rt 46. I drove past it 4 times before I finally saw a U-Haul truck in the back.

I had reserved a dolly and hand trucks, and they didn't have them.