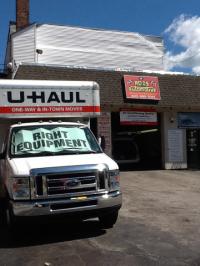 smooth. will use again. thank you!

This rental location is unbelievable, the worst experience with U-HAUL ever! The owner charged my invoice with the insurance coverage that I didn't ask and he insisted that is mandatory when renting the city van. He didn't want to listen to any reasons and at the end, I have been obliged to pay !!!! The van cabin had an incredible and disgusting smelling, probably has not been clean never !!! I cannot figure out how U-HAUL allows renting equipment to such an incompetent and disgusting place. Not recommended to anyone!

Nothing. Service was great. Mine was a last minute rental and Rod's was able to accommodate me.

Everyone was very friendly and most helpful, before and after the rental. Definitely recommend this location!

The pick up was so convenient, user friendly, great customer service. Absolutely perfect. Will always use this spot in the future!

We could not be more pleased

very easy, pickup and drop off were seamless

The gentleman that called me in the morning to finish the process was very rude. Yelled at me for dropping the key in the wrong slot. Threatened to charge me more because I didn't do it right. I had explained to him that my drop off was at night, couldn't see anything. He pretty much said I was stupid and I should've seen it right on the door. Very unprofessional.

Rod and Rods automotive was very helpful and pleasant and kept in good communication.

The mileage out was incorrect. The mileage on the contract was 97051.6, but was actually 97056.0. Therefore, I was charged for mileage which I did not use. I was charged for 17.7 miles, but only drove it for 13.3 miles. Also was told that the gas tank was "absolutely full". I filled it up just before returning it, and put in 4.544 gallons. This was only a 15 foot truck, so the only conclusion is that the tank was not "absolutely" full when I picked it up. It should have taken less than 2.0 gallons. The man at the counter was very nice, but he said I would have to "call Uhaul" to get my complaints resolved. Based on past experiences, I did not even bother trying.

You need to work on communication...and the fact you think it is ok to just transfer someones reservation to somewhere else to pick up miles away the night efore.

This location was fantastic.

Rod was friendly and helpful

This was a very pleasant experience. Renting the vehicle was easy and was perfect for the job we had to do.

The guy at the shop, Rod, was very nice, professional, efficient and friendly. It was a pleasant transaction.

Great customer service. I would not hesitate to rent again from Rod's Automotive.

I was told and it was written on my agreement we could drop off there. The owner was angry to get the truck as there seems to be a communication issue between his store and others. I dare say it may be a software issue. The location on South Nashua called me and gave me a hard time as to where the truck was and told me I would be billed double for dropping it off at the wrong place. I told him that was an issue between him and the facility in Lebanon and he was a bit snide about it. He definitely did not give me a positive impression on customer service.

only used about 20 miles total, and when I went to fill my tank and it filled more than 8 gallons. I thought that was more than I actually used so I asked the guy at the desk how many miles to the gallon, and he said 8 miles to the gallon. so that would mean that I would of had to use more than 64 miles, which I did not. so when I got the truck the tank was not filled. so I paid more then I had actually used. was not happy about that! I should of only had to fill a little more then 2 gallons of gas to the truck, not more then 8!!

NOTHING I COULD SEE , EVERYTHING WENT SMOOTH THANK YOU