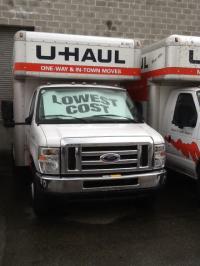 We could not find a drop off location and when we called we could not even locate the location they suggested. Three locations were closed. In general my family and I feel the service overall was poor.

First, the order location was changed to this one. When i went to pick it up, i was met with a very slow person to register the vehicle. He then proceeded to show me the vehicle and left! I went in the driver seat and verified the mileage and that was incorrect. Since I had the option of mobile pickup, i tried updating through there but it gave the error of something like : 'cannot be updated and contact customer representative'. The vehicle itself was good and clean overall. Second, when it was time to drop-off, this issue came up and I had to wait almost 35-45 mins before it was resolved and I got my deposit back. Thankfully i had taken all the photos and screenshots when required. It was just a bit too much after a day of moving.

The entire experience was incredibly disorganized. They had no idea we were coming until he looked into the computer. The truck we wanted wasn't even there. The truck we got didn't have what we paid for in it. We ordered for the drop off time to be 1136pm but I was told that we can't do that. So we were forced to bring it back in the morning. At 10am I was called frantically wondering where I was but there was no specific time they said to bring it in the morning. They just said after 9am. So over all, terrible experience.

There is only one person on this location that does not seem to know processes very well. I am still disputing a charge, but has not obtained a response.

I asked about the vehicle dimensions and was given the wrong information. It didn't affect me to badly, but I would have liked the info so I could book a reservation for BC ferries wand check if it was oversized in length or height. I also had an issue when returning the vehicle. When uploading the photos required. I would take a picture, then the application would report an error regarding memory. I chose a smaller picture file size which solved the issue Overall I'm really happy and would use uhaul again.

BMG was helpful, but unknown to me at the time, they did not close the door properly after showing me the insde. When I got home, the door was stuck and wedged in the open position. I then went to the closest U-Haul location (SW Marine Drive in Vancouver). 4 guys worked on the door together an after 10-min had be back in business. SW Marine Drive guys were true hero's. Would highly recommend U-Haul SW Marine Drive location; exceptional customer service!

Overall, I had an extremely disappointing U-Haul rental experience. The pickup location stated on the order confirmation was CLOSED and I had to scramble last minute to find another U-Haul resulting in delay with my move day. This is totally unacceptable! I reserved a 10ft U-Haul truck at March 23rd, with the reservation number: 22268242. The U-Haul was scheduled to be picked up at 11am on April 18th at the Golden Coin Dollar Plus Store. I tried calling the store several times on the day of at around 9:30am, there was no answer. I then called the UHAUL customer service line, they double checked my reservation and informed me that the store opens at 10am and ensure me everything is in order. I then called the Golden Coin Dollar Plus Store again at around 10:15am, there was still no answer. When I got to the store location just before 11am, I find out the store was closed and no U-Haul was available as promised. I then phoned the U-Haul customer service line again and informed them about the situation, she informed me that the store should be open and tried calling the store, but was unsuccessful. She then puts me on hold to try to find another 10ft truck for me, and after a few minutes, she was able to find another truck for me around 20 minutes away. I then rushed to the BMG Auto Repair, and finally they were able to get me a truck, and I was more than 20 minutes late and more than 15 minutes away from where I planned to be. The lady on the phone was extremely helpful and the staff in BMG Auto Repair also got me a truck pretty quickly as well, however, my entire moving day was delayed by almost 45 minutes due to this incident. Please kindly get back me to regarding this incident. Thanks for your time. Rex

Staff not friendly, and it seemed like we inconvenienced the guy when we asked how to secure the car on the tow dolly. The truck interior was dirty, and the car dolly was not cleaned from the previous customer.

Terrible location to pick up Uhaul from. Employees were rude and even though I had prepaid insisted I pay again as it didn't show in their system. I had to call Uhaul customer service in front of the incompetent staff for them to lift a finger. Also, didn't have the furniture dolly I requested at booking. Seems minor but makes moving a major hassle. Absolutely stay away from this location.

Once a car has been booked, any customer should not be requested any detour. The booking system is not working.

Uhaul kept giving us the run around for the drop off location, caused much confusion. Discovered there was a location 1 block away from my house to drop off the Uhaul truck, which was not listed anywhere. Very poor service. Would never recommend Uhaul for anyone.

there was no night time drop off capabilities contrary to what I was told. Location was filthy. looked like a backyard mechanic location

Don't change anything this location was more than accommodating when we were not able to unpack the truck into the storage location the night we came back to the mainland, I called him as soon as his location opened and when he heard why we were so late he told me we could return the truck any time before 4PM when he closes. The truck was originally to be returned at 10AM and the storage location didn't open until 9AM so getting it back on time was simply not possible. He certainly made the end of the trip with a UHAUL truck much better than the pick up had been. Truck was even swept out when we got it.

very bad experience. I am over charged with 0.89$ per kilometer instead of 0.49$ posted. Will try to avoid this dealer for ever.

What an experience from the get go. I tried to use the mobile pick up app for the first time as this location is super close to my place and the only one that had a uhaul available on the day that we needed it. Went to the place to look for the truck but the app did not specify if it was in the back or in the front. We obviously went to the front of the shop as we saw a bunch of uhauls parked there. I asked one of the employees to help us locate the truck and he told us that we should've went to the back. I told and showed him it did not specify that on the app. Otherwise, I would have gone there instead. They brought the truck, we took pictures and drove away. Come 7PM, we returned the truck but their gates were closed - both in the front and back. No way for us to bring the truck in so we left it in the front, NOT blocking the entrance at all (I'm sure you can see the pictures on your end). The app told us to drop the keys in their drop box but how can we do that when their drop box is inside? LOL! so we kept it because we didn't know where to put it and we did not want the truck getting stolen. The shop was closed on Sunday so we decided we will return the keys on Monday. I was called by Angela from Uhaul and was being asked where the keys were. I told her I will get my bf to return it at 11AM. This was already a hassle on our end since we were not told where to leave the keys in the first place. We were actually doing this shop a favour than anything. Come 2PM, Angela calls me again threatening that they have the tow truck coming and that we didn't follow the instructions to leave the keys under the seat. I was floored! I understand I promised 11AM but it's out of my hands what my bf did with the info I gave him. I was at work and could not do anything. I asked her why she was saying this when it was their fault from the beginning? She said to get my bf to come in 20 minutes or else I will be charged for the towing. My bf came there to return the keys and he was asked by the employee to bring the truck in so they can inspect. WOW! hahaha just wow! My bf basically told them to do it themselves as this has caused has a great deal of hassle and stress. Also, part of the mobile pick up was providing pictures of the truck once it's returned, you idiots! I called Uhaul customer service right away and spoke with Dimitri about this horrible experience. 15 mins after, I received a call from Angela apologizing for their mistake that I was right - they did not specify where to leave the keys and that they're only charging me for the rental amount and the gas. Thank you for doing that but this should serve you guys a lesson to read your notes prior to anything. I wasted almost an hour of my working time to deal with you guys. 0 customer service!

Drop-off is not well organized. Self-drop off application is not flexible, and required I completed at location and this was not clear. When I proceeded to complete the self-drop-off moment later when I was no longer at the location, I was unable to upload the photos that I had taken while at the drop-off location

Limited parking, horrible staff. They will try to scam you for cash fees and intentionally misread your fuel levels. If you do go to this location my advice would be to do everything you can via the website, photograph everything, and don't be afraid to demand all "fees" be in writing.

* timely pick up * hassle free service * I would love to hire again!

The answers to the questions above have merit for the drop off location; however, in general the u haul experience wasn't great. Despite significantly closer uhaul locations I was made to return the truck quite far away. Mainly though, the allowed (and charged for) kilometers I received was a lot more than I used and despite that the rate stayed the same.

Everything was great! Thanks.

The â€œstaffâ€ at the location were not very helpful. By the time we actually left, we lost half an hour of time we paid for. The truck had issues with the engine a few times and at one point the brakes were jammed which cause additional stress.