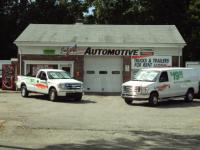 He should've had more floor dollies on premises. I asked and paid for two I had received one. The only other option I had was a handtruck. So I took that instead even though I didn't need it.

Accurately post store hours. I was scheduled for a 4 PM pick up on 11 June. When I arrived a closed sign was out and the location had closed at noon. Fortunately, the owner was still there waiting on an auto parts delivery.... and he did help me. But, he had told me that if it hadn't been for the parts delivery being late, he would not have been there. Then what... after I had driven 30+ miles to get the trailer?

I requested a different pickup location, but was forced to go an hour away to this location just to get the truck because it was the only one available. Nothing bad about the location and the shop itself, the employee there was very nice and helpful. Just frustrating that I reserved the truck for a much closer location months in advance and was only told the day before that I had to drive an hour away to get it.

It would be helpful if you could find a location closer to where the person is coming or going. I had to drive 30 min out of my way and that was time/money for me. But the facility was nice and helpful

Very professional and friendly easy check in and out. I would definitely recommend this location

Pick up was filthy inside and out and smelled like old cigarettes. I'm an ex smoker and I did not appreciate smelling nicotine for 4 hours. It stunk.

How about finding them a closer location for pick up and drop off. I had to drive almost 20 miles for a truck when there are at least 3 locations closer to me. Not a happy customer. Will not use or recommend uhaul ever again.

Truck condition could have been better. Interior was kind of dirty and smelled bad. Engine oil was 2+ quarts low, but â€œJohnâ€ filled it while I waited. Tire pressures were 31, 34, 38, 41. I paid $1 at an accu-pressure pump to set the tires to the specified 36 psi cold pressure. Otherwise, the truck performed well and the automated checkout procedure was reasonably efficient. John was courteous and helpful.

I wouldn't change a thing. The gentleman I picked the truck up from was kind and considerate. Thank you for making my move so easy!

Easy pick up and drop off, very virtuous..

No issues at all, I was in and out both on the pick-up and the return!!! I would use again, John and Michael were terrific!!

The truck was in poor condition. The power steering is on its way out and loose. The truck has a tendency to wander, it has a horrendous exhaust leak. The trailer crank handle is broken and missing. The reservation was changed by you and it doubled the price of the rental. The person at the rental location nor your support people that he called could fix it. The entire process had to be reconstructed. It took two hours of my loading time to get the truck and trailer. So much for your "express check out". After the loss of loading time, the truck in disrepair, the slow and unbearable 800 mile trip in exhaust fumes from your truck, you have the unmitigated gall to charge for an extra day because I was five hours over the time you decided I was released, which was wrong.

The truck was an older one and was well-maintained in terms of operation but has the squeaks and such of an older vehicle.

John was great and extremely helpful.

When you promote that a rental is $19.99 all over the van and a 4 hour rental eventually costs $93, false advertising comes to mind. What is that about?

Picking up the truck was not an issue. The issue came when he told me he did not have an auto transport for me. He spoke with the main office and they stated they would call me when they had one available. I received a call that said they had a transport for me but I was in the middle of loading my truck and would have to stop and drive over 30 miles to PA to get it then back to finish loading. I declined, I was told they would keep looking and call me when they had another one. I did not receive a call but saw an email stating they had another transport and again I would have to drive about 30 miles to get it out of my way and had to secure my load that was 75% complete to go get it before they closed. I drove the required distance and hooked up, the running lights did not work but turn signals and brake lights did. I was not happy as this mean I would not be able to see the transport easily at night. I had to take it as I was getting on the next morning. This trip cost me 36$ in fuel the next morning before we left and my wife a lot of stress because we did not have it when we picked up the truck. This was booked and confirmed in advance and we were inconvenienced. After the trip we were appeased by giving us $50 off our rental which when you think about it was $14 after paying for the fuel it cost us to go get the transport! This is by far the worst experience I have ever had with U-Haul and will think twice before using them again! Respectfully, Robert Hamlin

I wanted to pick up the truck locally. Newton was a distance and of course added to the cost of the mileage. I should have been told where the pick-up was going to be before I paid for the truck.