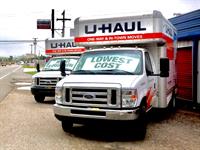 Show driver how to use outside mirrors and about tow drive. I had the hardest time driviving 500 miles thru mountain at nite. Could barely see

Nothing at all. Everything was amazing especially the lady who checked us out. She was more then helpful and I recommend that location to everyone.

I did not know where to park

Cost per mile is excessive.

Smooth and fast pick up and return of equipment.

We were given a cargo trailer with a tote that had a slow leak in it. Ending up breaking down on the side of the road in the middle of our move with 5 children. Called for roadside was told to use the app. Used the app after waiting over an hour in 100 degree weather for no one to call text or show up we plugged the tire at our own expense. Then returned the trailer to its destination the very next day but was still using the dolly in which I was entitled 3 days with. They called to tell me that I was going to be charged over $300 for a non returned equipment when I was still entitled to be using it at that time. Then the next day called to tell me they didn't return my trailer bc the dolly was attached to that reservation and they were going to charge me $20 a day extra for that. Customer service at my pickup location with Martin was amazing. Customer service with dropoff location is seriously lacking and the lady I dealt with was rude and when I said something about having to repair the tote ourselves she literally said I don't care. I also asked if I could have our converter plug we bought from them that was left on the trailer and she told me NO. I didn't get refunded for it either.

Took us over an hour to get the truck early. When the attendant finally arrived we got the truck and all went well.

Don't automatically add insurance without asking customer. Come out and show where trailer is located and at minimum offer to assist hooking up and doing inspection of equipment aswell all working lights.

The truck and self U-Haul online portal were great. Pick up and drop off were simple. However after I finished moving and had completed dropping off the U-Haul I decided to order a pizza online with my phone to feed my girlfriend and buddy that helped me move. The owner of Affordable Self-Storage in Nitro pulls up in his truck. My girlfriend and my friend who helped me move were just sitting in our car and minding our own business about ready to leave as soon as I place the order for pizza and the owner approached my car. Obviously he's walking over thinking we are loitering the property (Which obviously we were not as we had business there) or doing drugs or something. Had the audacity to accuse us of loitering when we had just dropped off the truck and had been ordering the pizza maybe 5 minutes or so. It was rude in my opinion. I understand he didn't know what we were doing or who we were, but it was inappropriate and I will not rent from a site where customers are profiled as criminals.

Drop off location was great as well. Just the whole experience from pick up to drop off was so confronting to know that I can trust in a company like Uhaul. Thank u all !!!

The inside of trailer could have been cleaner , muddy .

I was at the location and unloading; I finished 20 minutes after the place closed, and there was no way to drop off the key; the keyboxes were impossible to access. I left the truck, and returned with the key after they opened up, an hour after the key was due. The same person was working. I was charged over sixty dollars for an extra day. I feel that an effort could have been made to avoid this by the staff. No one was rude but I didn't feel that the fee was really fair, since the key boxes were inaccessible and locked shut with circle locks. She knew I was there and that I was dropping a key off the evening I unloaded; there were few other people there, and I see no logic for having keyboxes if they are going to be locked shut. The truck was turned in earlier than the due date. Next time, I will probably try Ryder.

The service at your Nitro West Virginia location was excellent. I tried twice to talk to someone at the Saint Albans West Virginia location and my phone call was cut off after being on hold for a while. You have to listen to too much automated stuff before you can just ask a question if you have a particular rental. I had to call back and start listening to the same thing over but when I called they Nitro location they were right on the phone and that's where I went and made my rental even though it was out of the way. if I wanted to use the online service I would have but I just wanted one question answered.I know your saint Albans location is a much larger operation but you still need to have a courtesy line for someone who just needs to ask the question. There are lots of people who still don't understand online services.

Trailer was clean but had a lot of previous damage.

I did not like the fact I had to drive 10 miles each way to get a truck, or the fact the I returned it 17 hours earlier then my due time. Funny thing is that if I'm an hour late upon fee return then I'd be charged. The gas mileage is that of a diesel. Location manager was fantastic and friendly the one plus to my trip.

When I picked up the uhaul it was parked slanted, exactly how I parked it when I returned it. It makes for a really bad blind spot trying to pull off you lot with people heading towards the interstate way. I would recommend parking straight back not slanted!

There was no clearly marked drop box. I placed the key back into the lock box because I wasnt sure where to put it. Any other issue I had was with the online phone based check in procedure. This location was great and had everything ready to go.

The trailer was very dirty inside. If I had returned the trailer in this condition, I would have for sure been charged a cleaning fee.

Nothing. Staff were friendly and helpful.

Truck was very muddy on the inside.

Everything was fine. The truck was ready to use. (The back door was frozen shut, but I used water to free it. The weather was bad, so this was no fault of the Nitro location.) I would gladly use this place again.