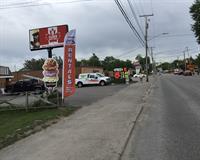 The pick up was not full of gas, but I filled it when I returned it. The interior was a mess - full of mud. Seats were filthy. garbage from previous renters in the vehicle. Bad. Vehicle had damage.

Server was slow and was unable to complete transaction at location, not the fault of the provider. However my anticipated experience was not achieved, hence the rating.

1) When I called to complete reservation I specifically asked if the pickup trucks were 4x4 and was told yes. When I arrived to pick up the vehicle, it was 2x4. I asked if they had any 4x4 and they said no. I asked if any U-Haul pickup trucks in the fleet have 4x4 and they said no. I required 4x4 and it was very difficult to complete my task with 2x4. 2) Vehicle was very dirty. There was what appeared to be ashes from cigarettes all over the passenger seat. The attendant was upset that I indicated this on the mobile pick-up process instead of just letting him know directly; he seemed to be trying to avoid me indicating that the vehicle was dirty on the website. 3) Vehicle was damaged. Driver-side rear quarter panel was damaged but had the X stickers on it which I was told to mean that the location was aware of the damage. The passenger side tail light was also smashed out, which they were not aware of. I'm willing to pay the mileage and CDW but would like to be refunded the $19.95 + HST for the rental itself as it was not what I asked for or was told I'd be receiving and it created much additional headaches without the 4x4.

Staff must ensure vehicle is safe to operate, ie: checking if wipers are missing as this was the case with the van i rented. It was raining and did not know the wiper on the driver side was missing until I turned the wipers on, had to then make an emergency stop to avoid a serious accident. To add insult to injury, i was advised to purchase a wiper blade myself -as if uhaul expect their customers to do this?? I was on a tight schedule so this was just getting ridiculous. Staff at this location were friendly and came to a quick resolution, but all this could have been avoided if the vehicle had been thoroughly inspected beforehand. The interior was not cleaned either, empty water bottles left under the seat and garbage along with a face mask left inside the doors from previous renter. Drink holders were sticky also. This makes me doubt they have covid-19 protocols in place.

I've never paid so much for a vehicle rental before and the truck was so gross it has dust piled up on the dash and that takes awhile for that to happen. Not very pleased. I called this location to book it and they said they didn't have trucks so I called the location on pinewood and she said ya pickup is 521 lakeshore and I was like what I just called and they said they don't have anything and she said they do it all the time and are lazy or something so I don't see why they do that it's a bunch of non sense for nothing.

The Huntsville location where the vehicle was originally booked on September 3rd 2020 did not provide a vehicle as promised on Oct. 3rd and made no effort to find me one. I had to call head office, and one was found 140 km away in North Bay. I have sent an email to 839027 GM detailing the complaint.

Absolutely amazing from the time we reserved to the time we dropped our rental off. The staff at 6/Eleven were fantastic! I would definitely rate their service 10/10. Thank you!

They did a great job, Good Service.

Truck Cab was disgusting. Milage terms were not conveyed properly.

So i just want to say that the girls at Parry Sound and North Bay were good and professional. My complaint is with the company, I reserved a truck 2 weeks before i needed it and when it came to the date travel took my truck and sent it down south , I then had to take a day off work and get someone to come with me, drive all the way to north bay ( 2 hours there 2 hours back) with my car. I made dam sure the price was dropped and reimbursed for the fuel that i spent. This is very unprofessional and bad business . I wasn't the only one, there were two other customers from parry sound treated the same way. The girl from parry sound ended up taking the brunt of everything and thats not fair to her, she had the trucks there. Obviously your company doesn't care about customer to treat them like this.

Terrible experience. Our truck was blocked in and it took us a half hour to try and get it out ourselves because the staff didn't drive and we were then late because of it. Also there was suck confusion in communication trying to organize our order it was frustrating.

The truck was cleaned, but the mirror on the driver's side was taped on and was too small for visibility.

When we got home to load the trailer, my husband noticed a very large slit in the tire...he called and they where not co concerned at all. He also asked if they have a check list to go over to make sure it's safe for the next customer....no.

Very satisfied with the customer service and how I was treated. Friendly and courteous

When I picked up the U-haul it was completely out of windshield wiper fluid, the windshield was cover in bird feces. The vehicle was very dirty and clearly hadn't been cleaned in a long time. It also smelt like smoke.

The truck we ordered wasn't available and when a sibstitute was provided we were told we'd have to pickup it up at a different location which was too far away to get to by bike. When I complained a truck "miraculously" appeared at our chosen location but when I arrived to pick it up I was told that the previous driver was going to be 3 hours late (this only a half hour after UHAUL assured me that they'd spoken to the driver while I was on hold and assured me he was on time). I had arranged to have a friend drive the truck back to North Bay after we'd unloaded in Kingston and when my friend returned the truck he was told that he'd been made the primary driver and was responsible for the overage before the uhaul agent would let him leave. The agent, who I had spoken to twice in person over the past two days, became belligerent when I attempted to explain the mistake he made and hung up on me. I called back and he told me to contact UHAUL but by then I was too frustrated to even bother. Way to add even more stress to our move!

Everything went great. Keep up the good work!

Was very impressed with the service I received by the team at the Lakeshore location in North Bay. Will definitely recommend them to friends & family for sure !

Excellent experience with the 6 Eleven location. Would definitely recommend!

keep up the good work

The staff at 6 Eleven were very courteous and helpful. I was completely satisfied with the service I received & will recommend them to my friends & associates.

Be nice if a flat rate fee by week or month and no reserves, other then that very satisfied, will rent again