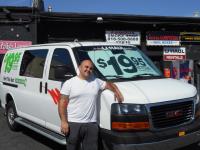 The location has the best service I have ever seen!!! Highly recommend to all!!!

Pros & Cons with comments: Pros- I â€œbasicallyâ€ got what I needed. Got a clean van, furniture pads and furniture dolly to use for my move. Cons- Did not get what I needed and the location is unreliable. I reserved my van and equipment (standing-equipment dolly not furniture dolly) a day before; I got a confirmation code. Upon arrival, the (Armenian) staff/owner stated the reservation was not made and what was shown on his end was just â€œinterestâ€ of a reservation, and that in fact we are lucky a van (although not the one requested/reserved) just became available. However, someone else reserved the van and taking it would mean they would not get one; This would somehow result in him getting charged. He also said he did not have a standing-equipment dolly but did have a flat furniture dolly; We took it as something is better than nothing. Lastly, he said he would have a lock box outside back door when returning vehicle same day to not be charged for the second day. Upon arrival to return keys same day, there was no lock box and I was charged for two days worth of rental and use ($140). Ultimately I wish I rented somewhere else but I thought my reservation was properly made. Being charged not only for two days sucked, and being charged for two days for a dolly that barely helped me sucked too. Lessons learned- Research a place before rental and maybe call first thing in morning to confirm reservation of vehicle and equipment; Hopefully this extra work will help for next time.

I did not make a reservation online as I normally do but the gentleman at Royal Computers & mailboxes was friendly and made the in person rental experience quick and easy. If you're in the north Hollywood area, I highly recommend this U-Haul location.

Outrageously BAD for 2 reasons: 1) attitude of proprietor. 1st thing he said was â€œyou're late!â€ 20 min. after scheduled time. They he told me about his choice for presidential election, and when I asked we look at mileage on odometer to mark on paperwork he said don't worry I've already done it.. 2) he said he would email receipt and when I got it he over charged the mileage and ridiculously charged a cleaning fee!! I have photos of the clean vehicle and the odometer. I WILL NEVER USE UHAUL AGAIN if I can avoid it. Fire this location!

The truck was very dirty, and the person who was taking care of the truck at the parking lot was smoking WEED INSIDE OF THE TRUCK AS I ARRIVED!!! This is RIDICULOUS!!! I filed a complaint, this was the first and last time I will use Uhal

They were nice, but the location opened 2 hours after my scheduled time.

Not charge $60 for a trip that was less than 5 miles.. I don't understand the additional charges?

They charged us a cleaning fee even though we returned the truck clean.

The mobile process wasn't very user friendly. I never received certain prompts to complete my reservation. Eventually had to manually go through it with an employee.

I have been charged extra without my permission!

I was charged a cleaning fee when the only thing I picked up was a TV. All we had with us were out wallets phones and keys. There's no way there was any trash left

the person who helped is kinda rude and doesn't really care about customer service. it's almost as if we are bothering him. too many extra side charges. i dont think i will use uhaul on our next move.

The validation process took so long and was so hard to contact that I love half n hour of my time that I paid for for moving. Was very unhappy with the initial check-in process but the rest was overall a good experience.

Have a larger sign out front and show on the sign that the trucks are parked in the rear of the location.

Better description of location as you can not see it from the street, it is in the back of the shopping strip.

Give more clear information about miles magermant, and tell how much gas the van using, because we've payed $15 FOR 17 miles, and this is kind of strange, because it is not a tank

The service that they provide was friendly and fast, definitely recommend it, find the place is a little confusing but once in there the owner or manager take care of everything. I was using the phone to order my truck online, it take some time then I call and the owner or manager offer to help me, it was a pleasure renting the truck with them!!!

As soon as I got in it said rear right tire was flat. Why did I get a vehicle with low tire pressure to begin with? I then had to add miles to put air, and after I pumped air and checked it still said the tire pressure was low. I kept trying and checked all the tires but the signal never went away. Apart from that, the fuel tank was low to begin with so I put gas, and when I returned it as it was given I got charged for fuel? I also requested a dolly and never received one but was still charged for it. Why? I was very disappointed and unsatisfied today. And should not have been charged these amounts. I will be disputing them.

ChARGED A $10 CLEANING FEE, WHEN TRUCK WAS LEFT AS CLEAN AS IT WAS AT START OF RENTAL.

The truck was dirty in the back. The parking lot was poorly lit and the trucks were too close together making it nearly impossible to get into the truck. I was charged for an additional day and a cleaning fee. I dropped the truck of on time, clean.

DO NOT rent a Uhaul truck or van from this location. Rented a van that was supposed to be $19.99 for 6 hours, got the $10 insurance and was somehow charged $91. I've used Uhaul services at least 10 times over the years and have NEVER had this happen. I was charged a $15 cleaning fee??? Never had that happen once before. Called the manager directly and left him a voicemail, he hasn't bothered returning my call. DO NOT RENT FROM THIS LOCATION.

Have accurate info re truck. When I booked the reservation on 800 number I was told Van took 26 gallons and git 20 mpg. In reality the Van held 31 gallons and got 16 mpg.

They could be nicer. They are lacking in customer service. Both picking up and returning made me feel like I was bothering them. I love Uhaul but did not feel like I was renting from Uhaul this time. I will not go back to this facility.