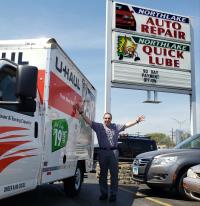 The man who "helped" me with the truck was VERY rude it was as if he had no manners at all. I usually come to this uhaul and never really have a problem the other employees are very nice and respectful but he seemed new I have never seen him before but he should not be working with the public.

I had a great experience with two representatives - they were very helpful in securing a truck on short notice for me.

I was charged for a clean up fee? The entire counsel was full of wrappers/garbage-sticky etc. In an era of watching out for germs everywhere, there was not one sign of anything disenfected.Or an attempt to clean thoroughly.

Very excellent customer service at this location. Would recommend to everyone looking for a truck. Go here first.....

I didn't really pick this place and my feeling was that they were new and because of this still involved in a learning curve. I think it is a fine place. I have nothing bad to say about it

This was my first experience renting out a uhaul, especially a 26 footer and I got to say this location made the whole process an easy peasy lemon squeezy

I rented this truck at a rate of $19.95 per day. I returned it within 90 minutes after driving exactly 3 miles. I was told to place the keys on the front counter by the owner. I have now been charged for 3 days plus gas. This is insane and unethical!

Start to instal rear view cameras as a rear view mirrors, just like UPS did on their trucks it is a big help.(I was a UPS driver for 30 years).

This email does not belong to customer listed. Please check your records

The mobile check-in process took approximately one hour to complete and was counted towards my rental time. The van that I received had the driver's side window left opened and it had rained, so the seat was soaked.The passenger cab and back of the van was also in horrible condition. The passenger cab had somethings sticky spilled all over it as well as crumbs and wrappers throughout. The back of the van was coated in so much oil, I had to lay down cardboard prior to loading my belongings. The statement I was sent after the rental also listed a cleaning fee, but it was apparent the van I received had not been cleaned for some time.

The truck ran well which was very good. However the cargo part of the truck was covered in dirt. We had to sweep and mop it out otherwise our couches and other belongings would have been filthy. The cabin wasn't clean either. It stunk of cigarettes and stale sweat, it was awful. The cup holders were left with sticky liquid in them and spills down the console. There was a rotting Jimmy Deans breakfast sandwich under the drivers seat along with other food on the floor. I had to wipe down everything in the cabin because of the film of dirt on everywhere on the seats, dash, steering wheel, doors, etc. There were signs stating that the truck had to be returned clean or be charged $25. The cabin of the truck hadn't been cleaned in a long time. I've helped friends move in the past, rented U-HAULs, so I was disappointed at the filthy and unsanitary condition of the truck. I was moving and did not have another option. The people at the rental facility were nice but the truck was not clean and that was very disappointing.

The owner or manager (Not the gentlemen who assisted me when I picked up the truck he was very helpful and polite.) But upon drop off the guy who gave me my receipt. Acted llike I didn't put the gas back. The balance was double what I thought it would be. I was short 25 dollars and the guy told me I couldn't leave. I had to stay so they could call the police. Ofcourse i left went to cash my check and returned to pay the balance. Got into another argument with him before leaving. Basically he treated me like a scam artist. Like I'm a criminal trying to get away with something. UNBELIEVABLE, TERRIBLE , DISAPPOINTING

The guy who helped us was awesome. I think his name is Jim.

Pay for rental for me

I was first very shocked at the Northlake Auto repair location, when after filling out the online form to rent a 15' truck through the phone, it said I had to go inside and pick up the key from a person. The phone clearly said I have to wait until 7:00 am to pick up the key. Seeing it was already 7:30 I went into the shop and asked to pick up my rental. The mechanic Juan Delgado looked at me and said, "uhaul doesn't open until 8." I told him my reservation was for 7:30 and then showed him the confirmation email. He turned to his computer and started typing without saying anything. After a minute or two he said, "I dont know how you were able to reserve a truck here because I dont have any left. The two trucks here are already reserved for later." I again showed him my reservation and told him I needed the truck. He sighed and asked how long I needed the truck for. I told him about 4 hours. He then started to continue typing on his computer. He handed me some paperwork and said to sign it then looked at me and said, "I need the truck back around 11:30am can you do that?" I told him I was pretty sure I could. I went to start moving into my new apartment. Around 11am I got a call from Juan asking where his truck was. I told him I was about half way done with unloading the truck. He was upset and said his client was there to pick up the truck and he would be charging me $500 in late fees. Then hung up. I called the customer service line for uhaul to report the incident because I left my car in the auto shop parking lot and was afraid something would be done with it. Valerie and Chris were very helpful from uhaul customer service. I am still waiting to see what will be done about Juan and the Northlake location

Well I picked up truck with 3/4 of fuel return it with 7/8 fuel got charged for 13.50 fuel used would like to have credit back

Great experience. Staff was extremely helpful. I will use this location again as well as recommend it to others.