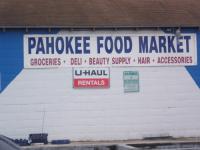 The person that runs the south bay uhaul is very unprofessional and rude. 1 He arrived at the location a hour late had to wait for him to finish getting his car washed causing me to fall behind schedule 2 Returning the truck and trailer to the location there was another trailer parked blocking the entrance so I drive to a open spot long story short the dealer proceed to get wise and cocky in which I had to remind him that I am a customer paying him for his services and should learn how to respond to customers and a back and forth between me and him. I was told be all to avoid him he is a bad business man

TRUE STORY. I needed a U-Haul trailer so the only one available was in Pahokee Florida 48 miles from my house. I get to the location and the store was closed found this after I prepaid. Do they sent me to a store 2 miles away. I get there it's a hair store-seafood restaurant-quick stop store. I go told him who I was and I had a reservation. The dude was drinking something strong he started filling my information on the computer but the good and hair line was backing up so he told me to come behind the counter and finish the rental agreement. I don't know what to do so there are errors and I got an error code. In between costumers he tells me to pick one on the computer and fill in the number. He wrote the trailer number and said ok have a good day. I was waiting he never came outside. I went back inside the store and he was tending to the cash register. Fast forward the cook and I drug the 6x12 trailer to connect it. I'm now driving to another uhaul location to check and see if it's connected correct.

It was a bit frustrating at first, but I don't think if was anyone's fault. I wanted a 10 foot going one-way from Florida to North Carolina. I was told I couldn't get one. I was given a 20 foot one ... much too much for my needs. I later found out that trailers were hard to get because of the growing season in Florida had ended. It worked out, however, because I got a 15 foot trailer, which suited my needs perfectly.

Have your staff know what they are doing! The truck had not been cleaned out at all. There were cigarette ashes all over the cab, and it stank. There were roaches in the back of the truck. WE had to clean it out before we could load our own belongings into the truck. The system online for checking in was not up to par either. This has been the worst experience we have ever had with UHaul!

I was a tap off from the fuel usage when I picked up the vehicle to returning it and I was charged 31.88 that's ridiculous

It was pouring raining and the owner asked that I run back outside to park the truck in the grass, which was already full with other uhaul trucks, and take a picture of the odometer and fuel gauge. I called them before returning the truck and was not told that I would have to do this, so I had to run back out into the rain to do this. Every other uhaul rental place that I've frequented checked these measures on their own and had adequate space to park their vehicles, but not here.

At a safety net on the truck gate when closing

If you renting for a day you should be able to turn it in the next day the time you picked it up.

I would not recommend U-Haul to anyone. I have been trying to reach some one because I was charged for a one-way rental when in actuality I returned the truck to Pahokee

Your 1800.number was lovely. U have good people working the phone .

Mileage price was .30 under my reservation. I was charged .99.

When I picked up the 6-12 cargo trailer the owner did not come out to help me hook it up so I asked someone in the lot to help. When I dropped it off I had asked the owner to help me lift it off the truck bumper and h refused to come out to help me. I told him it was to heavy for me and that I have a bad back and he told me it was not his responsibility to help me with the trailer. After 30 minuets of trying I dragged and cement bumper stop from the parking lot and put it on the back of the trailer to help off set the weight of the tong and I was able to lift it off my truck. In all the years I have rented U Haul equipment I have never dealt with such a person. Most of the time the agents are very nice and helpful and make sure the equipment is hooked up properly and then help you remove the equipment. I had called customer service to complain and spoke to the area manager Kevin Davis and I wanted to know how he made out with the location, I left a message for Kevin and have not heard back from him. The agent does not deserve to represent U-Haul. U Haul should remove there equipment from this location and give to someone who is professional and not a jerk Sam Martiello

I wouldnt even give them 1 star. The Auto Transport was faulty and made me late to pick up my car so I had to keep for one extra day for a total of 2 days when I wanted one day. Then they charge me for 3 Days on top of it when I only kept it one extra day. Now I have to go through all these hoops to try to get my money back ridiculous. I hate U-Haul

I was charged for an extra day including insurance after I was advised that it'll be normal fees if turned in by 11:59p on February 27.

His computer was inoperable, the inside and outside of the establishment was deplorable to say the least. Barely any parking for the vehicle and they were quite rude!

Lights were not checked. Passenger side tail and turn signal lights not working

Better customer service. I waited and hour to rent the equipment and was cleaned.

The merchant had no clue what they were doing. They tried to double charge me as well.

Better customer service. More knowledge about the rental equipment. Inspecting equipment with customer. Helping customer hook up trailers and insuring that they are properly and safely connected.

Pahokee's license should be removed. The place was not only discusting and dirty but the staff was revolting and uninviting. The worst service ever. I preregistered online and I still had to wait for 3 hours to get a truck. Missed an appointment.. it was horrible.

THE PICK UP LOCATION WAS AWFUL!!!!!!!!!!! THEY DIDNT HAVE HAVE THE CORRECT SIZE TRUCK SO I HAD TO GET BIGGER TRUCK WHICH MEANT MORE GAS AND THAT WASNT BUGDETED INTO MY ACCOUNT THAT I HAD SET!!!!! GOT THERE EARLY BUT STILL TOOK ANOTHER 30 MINTUES DUE TO THE FACT OWNER WAS MOVING A FRIDGE IN THE BACK AND NO GAS IN THE TRUCK!!!!!!!THIS PLACE SHOULD NOT BE APRT OF THE UHAUL CORP......I HAVE RENT ALOT OF UHAULS AND THIS WAS BY FAR THE WROST EXPRIENCE IVE EVER HAD!!!!!!

They were very rude. I waited over an hour to return the truck because they only had one person that knew how to run the system and he left for the day before I came back to return the truck. I have rented a uhaul several times and I have never had these problems before. I would NOT recommend this location to anyone.