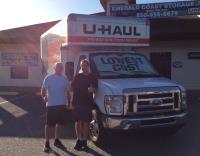 I was charged a rediculous amount of money for the truck l I just recently rented. I was under the impression that I had extended my rental period 2x. over the internet the past week. Obviously I did not. I returned my rental this Saturday at 10 am. Had the truck for 5 days. I was charged for 6 days and also some obsured amount of money per day for the truck. I will not be using this location in the future, neither for my Landscaping Company or personal use. I really feel that I was taken adbvantage of.

The lady working there is nice, but we had to wait 10 minutes to get into the office because no one was there and the door was locked. Very frustrating when moving is already stressful enough.

The pick up area was,Hard to get in and out of.

Does not have access to park uhaul equipment. Would have to leave equipment on the side of the road. One of the uhaul customers service representative was very unprofessional on the phone, actually told me to leave equipment on the side of the road blocking the drive way. All they could do was give me grief about the equipment being late after I told her no time for return was given. When I called again I spoke with Ashley and she was amazing took care of everything and even noticed I was given no drop time, more employees should be like her very professional and nice.

Worker was very helpful. Even called and updated our order when we were running late.

I did have a issue trying to get rental confirmation using cellphone,I actually ended up waiting until the office was opened to,get the rental..the worker was nice and friendly and didn't take long to get set up and on my way,,was great service and professional.would recommend anyone to use emerald coast storage services..highly recommended

My experience with this uHaul rental was without flaw. The van was clean, handled well, and was easy to maneuver.

I am disappointed I paid 170.00 to use a cargo van for 1 day and 7 hours. I was given a contract that qoted .39 cents a mile then when I turned the van in full of gas and clean I was charged .69 cents a mile. Two 19.95 charges 20.00 insurance coverage. I have never paid that much and no one at the uhaul accounting office has not even questioned it . I called to extend at the turn in time and it was noted by Amanda a representative but not extended,at least that is what Amber Doty told me and I was charged 19.95 for 7 hours she was admit that I bring it back at 5:15 and the price went up again for the extra 7 hours I was told 46 more dollars after my 104.00 payment the day before. I turn it in and it now was 64.50. I have a storage there also which it was four days into the month when I rented it and was told because we were into the month I had to pay two months rent which cost me 154.77. I am in the process of adopting three of my grandchildren and the last thing I needed was to be ripped off. Uhaul used to be great now I am thinking about movibg my stuff to another stotage place but we don't get reimbursed for months paid ahead.I really hope someone fixes this. Lesley

It was congested to say the least. Getting in and out you have to go through a small parking lot and if every spot is loaded you will be stuck until the move their vehicle.

Get rid of the selk check in via phone!!!

Horrible communication. Horrible spot to get to.

Professionall dervice at the counter

Same as report on the other piece of equipment. 15' truck and auto transporter. Both were excellent.

Very quick and easy return of the equipmeny. The lady was very courteous and professional.

The associate refused to let my husband assist her in connecting the trailer to his truck. Less than a mile down the road the trailer fell off the hitch causing him to fishtail in traffic and almost get in an accident. He then connected the trailer, CORRECTLY, and continued home. I immediately called the customer service number and was told a case would be opened for this situation and that I would receive a call from a representative in the next three business days. I said alright and the representative kept insisting that it would take 3 business days. Well I waited, and never heard anything at all. So.. I will not be recommending this location to anyone.

The ladies here are always helpful and courteous.

The location was clean but was not inviting. It was hard to find the entrance and the lot was very small in front of the building. I had requested Mobile Hwy and had to drive past it and another Haul site to return it to this assigned site.

Reserved a furniture cart online, but the location did not have any when I got there. Was told truck had full tank, but was a little less than full when I started using it. On the positive side, the manager was nice and refunded me for equipment not used.

Was overcharged for mileage. Was told there would be an automatic hold placed on my debit card to cover 50 miles and when I returned the truck I would only be charged for the miles I used. The hold on the extra miles has still not been released now two days later when the rep. said it would be done immediately.