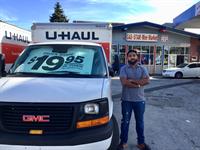 I cannot answer these questions because you keep sending the email to the wrong address. I have contacted uhaul twice already to inform your company of the mistake. Please review contract # 85134175 for Dee Marcus in Philadelphia. Please REMOVE chasingmydreams@gmail.com as this is NOT an email associated with this person. Thank you

It is a very busy store. They should possibly have a person dedicated to U-Haul pick up only.

Most difficult and inconvenient experience EVER from start to finish. Phone call after phone call to get things confirmed and straight. Employees at 1800 UHaul rude as heck! I will never rent or use Uhaul products/services again.

The worst experience ever and that place needs to be shut down. The customer service was horrible. I will never recommend u haul to anyone and going to seek further legal assistance with this matter.

Nothing the customer service and the friendliness was amazing..

Difficulty finding my vehicle because itâ€™s a small lot, vehicles were parked across the street. When returning the vehicle there was a private vehicle blocking the parking space. Location needs designated u-haul parking.

Easy and friendly location. Thank you

I rented a uhaul van and when i received the van it had 419 miles. Overall i drove 14 miles. When i took the van back apperantly it said that the van was suppose to have 390 miles. Thankfully i took a picture of the miles when i got it and my issue was resolved. Everyone there was really helpful. Just sometimes people make errors so if you rent a uhaul make sure that you have the correct miles on your documentation and on the actual vehicle. Overall my experience at this location was really good. They had uhaul available, the process of renting was easy and fast and the slight problem i had was resolved quickly. Would recommend this location to a friend.

Pick-up AND Drop-off Site were both very courteous and professional. Pick-up site was extremely helpful with coordinating same location of Auto transport carrier rather than making me pick it up at a further, different location. This was very much appreciated.

This company was very helpful with any problem that arised. And I will recommend them to any other person that I know

Employee was rude. Poor customer service. Did not take electronic payments only cash or physical cards.

I was overcharged and unaware I was being charged and the charges weren't explained to me I would like to understand why I was charged 102$ then when asked about how many miles I was going to use there was no way for me to kno that for sure so I guessed and it seems I was penalized for it. 19.95 is advertised then fine print says .99 a mile i went 20miles he said which im not sure that was true but still how does all that get from 19.95 plus mileage to me being charged 102$?

Truck was very clean and nice. Language was a minor issue.

We had reserved a 10' box van/truck and when we arrived the vehicle was not avalable. They offered us a van instead which we had to take because we were on a tight schedule. We were forced to leave furniture and personal belongings behind since we didn't have enough room in the van. This experience alone will force me to use another rental company next move.

I had major issues picking up my truck yesterday and after an hour long ordeal with the vendor and speaking to two Uhaul agents the vendor Finally handed over the keys to the truck. Moving is already such a stressful process which is why I have always relied on your company to help with the process, but after the events that occurred yesterday I may never use/ recommend your company ever again! I for some reason was made to get on a FaceTime video with two random men who were demanding to know where I was taking the truck. They claimed that they worked for the vendor, but were completely unfamiliar with the system. I was not comfortable giving them that information as I am a young female who was attempting to move all on my own and unaware of their intentions. When I refused to tell them where I was going they started making threats saying that they would cancel my already paid for and confirmed reservation, call the cops and "Come UP THERE" if I did not leave when all that they had to do was look at my phone screen and hand me the keys. They denied having the truck on the lot, denied possessing the keys, etc even after walking outside and looking at the truck with me. Upon realizing that the truck was on the lot and locating the keys the young man began insisting that he DID'T SPEAK ENGLISH. This was baffling to me since he had been interacting with me and everyone else that walked into the store with in yup, you guessed it, PERFECT ENGLISH! The two agents that I dealt with, one via live chat (Brian) and the other over the phone tried calling multiple. times to figure out what was going on and the person behind the counter simply ignored the calls. After one of the men from the FaceTime video showed up to the gas station realized that I was on the phone with an agent he began to demand that I hand over my phone in order for her to talk to him in which I informed him that she's been calling his establishment for quite some time now and that the ringing he was hearing was probably her trying to get a hold of him he finally answered. I was brought to tears by the people who represent your company, forced to participate in a video call that I did not want to be on. Such unprofessionalism is something I would expect from a new company, but not one that has been around basically since the birth of America.

This merchant lied about the miles I used and I ended up paying way more than I needed to. Furthermore, I tired reasoning with this merchant however he did not listen

I reserved a rental for pick up on 7/11, when I went to the Langhorne location I was told they had no rental and was told to go to alternate location 25 minutes away. Julian at Langhorne location did not help to fix the issue, only gave me the address and said uhaul policy was not to hold rentals, why than take my rental?

They overcharged me because mileage from computer print out was different to the mileage on dashboard of vehicle.

Uhaul could have made sure the original location at 1101 Orthodox St., Philadelphia, PA was in service before scheduling my pickup there. Which then had to be moved to the next day.

My best Uhaul experience to date. Fast, efficient, helpful, and friendly. I highly recommend this franchise.