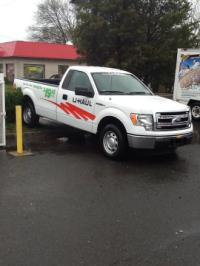 It was easy to find and our drop off person was helpful.

Lock on Lock box was tough to open. Other than that great experience

The truck that was rented had over 130,000 miles on it. Iâ€™m well versed in the mechanical field And can tell you the steering needs aligned, tie rods are not up to standard, Engine has an exhaust leak along with misfiring cylinders. Additionally, when i picked up the truck at night it was hard to see everything to give an accurate description of damages and all. (Had to bring a flashlight) Also, i spoke to 3 customer service reps. Each person gave me a DIFFERENT answer to my question. Please get it together and lets try and all be on the same page. Who ever Service rep Coco is she was awesome and helped me out the most kudos to her! Thanks!

Office as dirty and filled with cigarette smoke. Mr Stefanelli was polite but the other gentleman working in the office was rude, snippy and short-tempered with me. He should not be in customer facing work.

We want to get uhaul Iâ€™m a timely fashion. 10 min and under would be ideal.

Make renting thorough phone not such a long and hard process. I had to speak to 5 reps before I was able to use the equipment.

The approval process took too long.

Everything was rushed and the contract was incorrect as far as miles go.

I recently helped a friend self drop off so I had a little experience at this. Convenient when you can't get to service area before it closes

Gave us all the wrong information for locating/getting our U-haul. Took us forever.

I was early and that's not always a good thing. The gentleman behind the desk graciously interrupted his lunch to quickly help me, I had already done an online check-in which helped speed the process along greatly. He took me outside, hooked up the trailer, showed me how it works, showed me the instructions in case I forgot and sent me on my way with a smile. I was quite pleased with how easy everything was and the price was right. I'll be back to rent from this U-Haul location again.

Nothing Your agent was awesome

Nothing service person was great

The 26' truck I rented was awful. The amount of play in the steering made it impossible to track the truck straight, and fully loaded, it could not be driven over 40 MPH because it would yaw left and right violently, risking crashing into vehicles in adjacent lanes. This truck has significant wear and tear, and should be retired or completely done over mechanically. That was a terrible experience and I will hesitate to rent from U-haul again in future.

Forgot to adjust my bill. I ordered 12 blankets but only took 6.Worked with your customer service and they straighten things out. The woman that I spoke to was Jazirree and she was great. Thank you, George

Was originally suppose to rent from Brunswick Ave Location in Trenton NJ, August 2. Rented the 24/7 Feature from 8-10pm. The Store location messed up my order. Called The General Manager, Ahmad his number +1 (609) 540-9622. He said the store didnâ€™t complete the order during the day even though I had ordered the previous day. Was told by the General Manager I would receive a discount. Was redirected Drove 10 plus miles 30 mins away to a whole other UHaul in Airpark Rd Princeton even though my destination was right down the street from the Brunswick Ave Location. Had to drop off the Truck at the same location in Princeton 10 miles 30 mins away again. Was a long and stressful night. An easy trip down the road turned into a stressful 20 mile Journey, not my fault. I had to call out of work kuz I was so tired. I still received no discount even though I had to drive 10 miles out my way and the store didnâ€™t complete the original order. Highly Disappointed. - Aljamere Bey - 609 960 5476. Email - Aljamere1@hotmail.com - 26517498 Contract Number

This was not the location that I had requested from U-Haul. The location I had requested was changed the day prior to my pickup. On Friday I received a voicemail that I would need to pick up at another Flemington location a couple miles from the original location. I called and verified with U-Haul on Friday afternoon, this was not a problem but on Saturday morning the truck was not there in Flemington so I had to drive to Princeton to pick up a truck. Put my trip back over two hours. If someone asks me about U-Haul this is what I will tell them. Your truck may not be there when you arrive to pick it up even when you confirmed with them. I flew home to pick up the Uhaul to bring my items back to Florida, the timing was very important. You did not honor the contract we had made regarding the pick up location. I was counting on the truck being at the location that I rented it from. This was an expensive venture, and the truck should have been in Flemington as agreed upon. Thank you.

Total opposite experience of the pick-up location. The only issue was that FOX news was blaring on the TV. That is too controversial of a TV show to have showcased at a place of business.

Too costly for a long trip. Fix the headlights on that truck. It was very difficult riding in the dark.

We were told because we were taking the truck one way...we could drop off at any UHaul location. When we went thru the check out ap..it forced us to take the truck somewhere else 15 miles away. Waited 1 hour on phone to clear up problem with a rep again...your online check-in and check-out systems are very poor.

First of all, you do not give me the opportunity to say that I began my â€œcontractâ€ with U-Haul at the U-Haul facility on Rte 130 in East Windsor, NJ; I began the â€œrental processâ€ there 4 weeks in advance. Jon, at that facility gave me no paperwork, no copy of a contract - nothing, even after I questioned the lack thereof; he simply told me that my 15' truck would be there at 3PM on June 26, and that I should be there at 2:45. When I returned at 2;40Pm on 6/26, there was no truck. he told me first that the reservation had been moved to U-Haul in Hamilton; then told me the reservation was cancelled at 11AM 6/26. Was I angry - I WAS LIVID! All he kept saying was that he "had no control over 1-way rentals". He took NO responsibility for how this played out. Control or not, he retained NO RECORD of my reservation to pick up a truck at 3PM 6/26; he provided no paperwork; he provided no communication that the truck would not be at the location. To make matters worse, this guy was recommended to me, and when I gave the owner/agent the name of the former customer, the moron put all my information into his account. The guy to whom I was taking all the furniture received all the emails, text messages and a phone call - but he thought I had put him on as a Cc, and because there was no need for intercommunication on our part, I had no idea. Jon, the East Windsor guy, found me another truck, but it was in Princeton - at that time of day it would take nearly an hour to get there and nearly an hour to get back to the move site. And, just to make matters much worse, I had a moving crew waiting, and they went on the clock at 3PM; I was unable to get a truck to them until 4:55PM. Let's not even discuss the minor fact that everyone concerned looked at my license and STILL misspelled my name on the contracts â€“ even after I tried to correct it! Insofar as the second location (Stefanelli Avis 39527) is concerned: I pulled into the lot, went in, signed the contract; he told me the tank was 7/8 full, the truck was clean, and I was ready to go; I left the building within 10 minutes at 3:56PM, jumped in the truck, started her up and went as quickly, but as safely, as possible to the move site. There was dirt, dust, screws, and balled-up tape in the back of the van which had to be cleaned out before we could load our furniture and furnishings. It was not until the next morning when I was preparing to take the loaded van to PA that I checked control locations, knobs, levers, etc..and saw that I had less than a 1/4 tank of gas in the truck! It made no sense to call Stefanelli's, since IF he was going to do anything, I'd have to go there and that would put me nearly 2 hours behind schedule, so I filled the truck ($75), got a receipt and started my journey. Unfortunately, the contract was never revised; it still said 3PM. It was not until Thursday 6/27 PM that we were able to compare notes and realized that the East Windsor guy screwed up the contract by somehow adding m

Location was okay. The problem was with the actual booking of the truck. I called weeks ahead of time and booked the reservation. Then 2 days before the move, I called again just as a double check. Very difficult to find the reservation and when they did, my pick up place was in Missouri, (I live in NJ). Had to spend another hour on the phone sorting this out. The day of the pick up, as I was walking out the door to pick up the truck I received a call, NO TRUCK... never showed up from the previous person. The regional manager stepped in and after a while was able to locate another truck, much further out of the way, but he did give me a discount. I commend him for stepping in and working to rectify the problem, but overall my experience w Uhaul was stressful and moving is stressful enough without this additional headache.