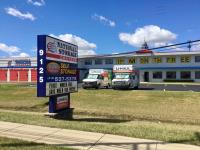 Staff gave me misleading information and cost me over $50 as I filled the tank that they ck gave me which had 1/8 tank and they marked the sheet as 1/4. They said when you fuel, put extra and we will reimburse you. But when I returned it. They they we can't reimburse you for the extra fuel you put.

Keep up the great work! Jordan and Shanna were very courteous, professional, and helpful when I rented a uhaul truck for my move this past weekend. They gave great customer service and I was very satisfied!

Everything was wonderful from the beginning to the end the customer service was impeccable. And that was very much needed due to the stress of moving.

My order time was completely messed up. Girl on phone when I changed it put it to 8:40 pm instead of am so wasn't ready. They're wasn't a truck available and gave bigger one to a guy that walked in the day before me because the guy thought I wouldn't be able to drive it. This cost me an extra trip with small vehicle, extra money, and not once did anyone reimburse me for your mistake!! Very disappointed ??

The requested appliance dolly wasn't loaded in the van so I didn't have it to use to move. The charge for it was removed when I called though. Also, the van needs maintenance as it bounces all over when driving.

The roof of the U-Haul leaked all over thousands of dollars of tvs and personal belongings!

The customer service was all around excellent !!!

The vehicle that I was given was in unacceptable condition to be rented. According to the service representative at this location, this vehicle was previously rented to an individual who had it for two or three weeks and it appears that his dog lived in this vehicle during that time. The vehicle's passenger seat and headliner had been torn apart and shredded to bits. There was dog here throughout the vehicle in every crack and crevice along with material from the seat and headliner spune across the dashboard and all over the floor. Every interior window head dog saliva and nose prints on both sides including the windshield. The vehicle also smelled very strongly of an animal. The dog hair within the vehicle looks like it was a Pitt bull terrier. To add insult to injury the vehicle also was on E, the gas light was on it was empty. I was offered $29 compensation for me to put gas in the vehicle and bring it back with a quarter of a tank. The vehicle appeared to be an older model and had 92000 plus miles on the odometer. The vehicle itself mechanically ran well and I had no problems with it. Throughout the years I have used U-Haul vehicles for moving from state to state and for the most part they have been good. What is very concerning to me is that this vehicle was allowed to be rented out in such poor condition. I even had to have a friend of mine follow me in his car because the passenger seat in the vehicle was not safe to ride in. This is totally unacceptable for Uhaul to rent out a vehicle in such poor condition. The attendant at this facility was very kind, courteous, and listened to my concerns. I did let the tenant know that I tried calling U-Haul's customer service but was on Terminal hold three different times. He gave me the phone number of the area manager and told me that I should call him with my concerns.

Great customer service! Will definitely return to this location again.

Was charged for fuel when I dropped the truck with more than I picked it up with!!!

There were hidden cost tacked onto my bill. Excluding the mileage which I was told about. I was never even given an option for insurance, it was just added.

I was very happy with my experience. I do wish the young lady I spoke with to make the reservation on the phone had mentioned that the location I was going to was a storage place. I got a bit turned around because I was looking for an actual UHaul building, however she was very polite & gave great customer service & so did the young man at the pickup location.

The lady in the front desk is too rude and she doesn't know how to deal and respect people, i have swiped my credit card three times and she was angry she said you dont have miney in your account and we will not let you rent UHAUL in the future and the way she was talking is not acceptable, the man who was there this morning when i picked up the car was nice but when returned it was not there just the girl, i am thinking this girl doesn't not deserve to stay at UHAUL

Don't rent equipment that the brakes don't work well, don't rent out equipment that the front end needs an Alignment, and the front end has no poor Suspension. Truck continued to pull to the right causing the driver to fight the pulling to steering don't rent equipment and not tell the renter that there is a taped hole in roof and renter agrees to the condition even though you were not told anything but signed paperwork that was hidden explanation on form, truck was very much a hazard and I did not feel safe driving it after finding out brakes were bad.

Good customer service and everything went like clock work