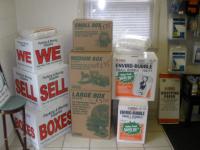 The 15ft moving truck I had ordered for pick up was not pick up ready at all. Frozen ice completely covering the windshield. And snow all around the truck. There was no windshield snow cleaner so I had to grab a shovel and take off the ice myself. Not only that I was stuck for 15 mins cause the wheels were too submerged in snow. Had no help and overran took 35 mins to get the truck out after started the rental time. Worst experience

Very happy with this experience, easy, friendly, helpful, and the truck itself was clean and well maintained.

Truck was not cleaned inside

I was told rental was for 24 hours. Then I was told the truck had to be returned the same day. Attendant said I could drop off truck any time that evening, just drop keys in slot on the door. I rented truck at NOON. I returned the truck at 5:30 pm, same day. I had the truck 5.5 hours & charged over $60! I was charged an additional fee for returning truck after hours. BULLSHIT!! I would NOT recommend renting a truck from that location to anyone. I was NEVER informed that there would be a late fee added to my cost. To say I was enraged would be an understatement.

the after hours check in procedure left much to be desired. Won't do that again.

Office hours listed are 9 AM to 4 PM; was closed when I arrived at 9; I called them & no answer; I knocked a few times, no response. I called U-Haul & was on hold for about 30 minutes & was told it was a GPS issue & that she couldn't help so was transferred & on hold for about 20 minutes more; more people arrived & I had to tell them about the situation. She also placed me on hold for an additional amount of time to correct the time & to find me another location! Other people didn't wait & left! While on hold 2 employees arrived after 10 AM! After a brief discussion, lady in office said that if I was having issues with U-Haul, they'd have issues too! I put c/s lady on speaker & had her talk to office lady. They fixed it but now I'm running over an hour late which was a ripple effect with the movers I got which is why the truck was returned after 4 PM. I also never received an email/message about return procedures as stated in the email for this review & now I'm being charged $20 more! I'd appreciate, if anything, you can waive the $20 fee. This was a horrible experience & doubt I'll use U-Haul & ABC Storage ever again. Should you have any questions or concerns, please contact me.

This has nothing to do with ABC. They were OK. It's your on-line reservation system that is terrible. It took me an hour to get out of there , after waiting on hold, being transferred, being told I had to turn on the locator on my phone, then having to download your ap only to have it not work, finally speaking to a supervisor who had me out of there in five minute. Why couldn't she help me in the first place? To top it off, I was charged an "after hours fee" even though I had the truck back to ABC by five o'clock. THIS IS ONE OF THE WORST, if not THE worst, business experiences I've ever had. The first thing I did after getting the truck keys was to delete the newly-installed U-Haul ap from my phone. I can guarantee few things in this life, but I can guarantee this with all certainty: I will never, EVER, use U-Haul again.

The location and staff great. The app is crap. Did not work and kept shutting down . Took almost an hour to get the thing to work then 20 min to go through all the steps. And then to top that off when I called for help the wait time was almost a half an hour. But when I was a few minutes late I received a personal phone call. Same problem with app when leaving. Gave the key to the nice lady that was getting yelled at all the time because of your shit system.

The lady at the front desk was extremely rude and unhelpful. Will not recommend.

II was embarrassed on how the front desk spoke with me and with my friends. She was very mean and have an attitude .She has no quality of dealing with the customers.

The owner of the rental place was rude and not helpful. When asking questions she said to look at the app she doesn't deal with anything that's booked online. And the site wasn't working.

Customer service. Lady at desk round lake park was Extremly rude and short worded. Will never recommend. Truck was dirty. Couldnt get truck we needed. After reserving online our preference and location, it was changed

Uhaul gave me my worse experience ever. Not only did Uhaul select a location 2 days prior to pick up, but no one was there to give me my rental. It wasn't for me calling the Round Lake Park location, I may not have had a rental that day. The Round Lake Beach location was a complete joke. Waste of my time! I will give that location a low rating on Google.

If I create an order for a 15' truck a week and a half in advance and everything went through, why was only a 10' truck available? I had to compromise and leave some things behind at my previous apartment just to have enough space in the truck. I don't understand why U-Haul has the audacity to tell its customers the day before the scheduled pick-up date whether the truck will be available or not. That should be on the day of creating an order directly from the website. So U-Haul just processes orders without knowing if the truck is available until the day before pick up? It's rather ludicrous and frustrating to deal with that sort of unprofessionalism. It's unfair to the client. Also, why am I able to order supplies from the website but the pick-up store doesn't have them available? Like I said in my previous paragraph, U-Haul just creates orders without assuring that the store will have the supplies? Why isn't there any coordination between U-Haul and the pick-up store? The only thing good out of this experience was the ABC Storage customer service. It's not their fault my preferred AND ordered truck wasn't in their lot. The clerk attended me very well and will recommend this store for any moving needs. But to recommend U-Haul is something I cannot do. This was awful service on their behalf. I won't use their service again.

Everything was wonderful and it made my move so easy. Thank you!

Nothing to change...rental process was quick and efficient...assisted me when I called stating I was behind schedule to return...overall experience was great...I'll come again

It took 45 minutes to checkout because the new requirements of photo of drivers license took forever. It should be a 5 minute checkout!!

Most of our issue was not with the location, so much as for the experience of renting using our phone for after hour service. It took us an hour and a half to pick up the truck. We arrived right at 7PM and got the access code. When trying to pick up the truck, there was an error processing the request. We live chatted, but the rep was unable to help. We called and spent at least 30 minutes trying to resolve. We got disconnected, but apparently the rep was able to get the account fixed, and we finally had instructions on getting the key, which was in a locked box outside of the gate where the truck was. Luckily, we remembered the access code to go in and out of the gate. The truck did not have the requested utility dolly. I have asked for a refund for the $10 charge, so hopefully I will get that back. When we returned the truck, we were again expected to remember the access code, as that was not provided. Luckily, we did and got the truck back inside the gate. I also needed to remember the combination for putting the key back in the lock box. We found the pick up and drop off procedure to be very frustrating, especially the pick up. The night we picked up the truck was cold and windy, so that made the experience even worse. As far as the location is concerned, the driveway into the facility was in poor shape, and as far as we could tell, once in the locked gate, we needed the access code to get out. If we had forgotten it, we would have had to contact someone so we could get out. Also, I put the blame of the lack of utility dolly on the location, as they should have made sure that was in the truck.