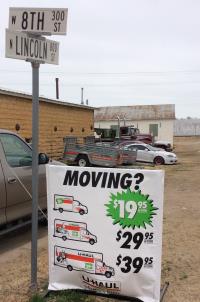 The place you drop off the Uhaul looks very unprofessional and dirty. Can't expect much from Russell, KS though.

No one was there. I had to call an after hours number during normal business hours. The shop looked sketchy. The guy that showed up to provide the uhaul was wearing filthy holey clothes and looked homeless. I was given the wrong truck. I was told I had to pay mileage and drive 40 miles back to drop it off at Russell or be charged a stupid amount for a convenience fee. Then later was told by other uhaul locations that was incorrect and they shouldn't have charged me for an in town move when I was driving from one town to another. I was told this caused me to be over charged about 200.00. The only good part of this location was they allowed me to drop the appliance dolly off in Plainville because I realized hours after we took the uhaul back that we forgot to take the dolly back too and Russell is 40 miles away and we never go that way for anything.

Staff were very helpful. Location of U-haul trailer was not staffed, had to call for service personnel to arrive, but once someone arrived, very helpful.

The only thing that didn't go smoothly was when I talked on the phone with someone, they told me the truck needed to be back the next day Friday at 4 pm. I could deal with deal that though the timing was short. When I got to Russell on Thursday , the guy looked over the contract and said I had until Saturday. This was perfect for me. I told him what I was told earlier and he said Saturday was correct. I was called on Friday, saying I needed to have the truck back that day. This mix up was on your end.

They were closed during business hours??? Told to just leave everything.

They didn't check me in just waived at me without doing his job then Uhaul called me the next morning wondering why its not checked in and they had to call the guy to check it in but based on the other ratings I expected it happen and had taken pictures proving I left it along with having witnesses. You can use this site to pu and drop off but be prepared to for the guy not to follow through one way or another then it would be ok..but if your in a hurry or don't take pictures and have witnesses...could have problems.

Location was closed for holiday, they help me go through the online turn in process so I wouldn't get charge for an extra day.

No one there at pickup time, but called the number and within 10 mins. had someone there and got us going. I was not on a time schedule, so this was not a problem. Overall, happy with this rental.

I requested the pickup location to be in Hays, KS. It's VERY CUSTOMER UNFRIENDLY TO ACCEPT MY ORDER AND THEN RE-DIRECT ME TO PIVK UP THE TRUCK 30 MILES AWAY. UHAUL SHOULD HAVE TRANSFERRED THE TRUCK FROM RUSSELL TO HAYS. INSTEAD UHAUL INCONVENIENCED THE CUSTOMER AND ADDED MORE COST TO GET LYFT TO TAKE ME THERE. SIMPLY UNACCEPTABLE!

The service representative was not answering the phone. Had to wait until pick up for the trailer hitch was inspected per u haul regulations. The site itself was very poorly kept and unclean.

They guy who ran it wasnt even there when I went to pick it up he was an hour late. He was absolutely disgusting. Had no idea hardly what he needed to do.

To start off my pick up location and time were changed. I drove almost 2 hours out of my way to get this uhaul. I was 4 hours behind schedule to pack and move all my belongings. When I went to pick up the uhaul, the location was closed and I had to call and it took them 45 minutes to show up. Guy got out of his truck and not even a hello, good morning, sorry it took so long. Was not very friendly. Will never use uhaul again!.

I reserved a 15' U-haul 3 weeks before we needed it, and we were informed that no 15' was available. Very dissappointed in U-haul, as I had given 3 weeks notice.

Moved everything and was done the same day with the trailer but was still charged for two days.

The best description of this location would be the back corner of an old car junk yard with a building that appeared to be falling over for its office. The truck seemed to be in good condition until a rain storm came along and realized the wiper blades were nearly falling off and did nothing to clear the water. Once driving the truck at night it also became apparent that the headlight mount was broken and the light was pointing 5 feet in front of the truck and about to fall out all together. The worse part about this Uhaul experience is that it took approximately 4 customer service representatives and over 2 hours on the phone to coordinate the appropriate information about the truck while nothing actually got done (meaning wiper blade or headlight) other than an "I'm sorry to hear that".

We started out the morning having to drive for an additional hour to pick up a truck, and it was 6 feet longer and bigger than we had ordered. Still had to go to another dealer to get the blankets we had pre-paid for.. That put us behind an hour, which put us in a storm for 6 hours. After 2 hour the check engine light came on, and for the rest of the trip every time the truck hit a bump, the automatic breaks slammed on. Moving is tough enough without U-Haul making it harder.

Caught them on a weekend, they were closed but reached them by phone and they were accommodating.

This was the worst U-Haul rental I have ever had. First of all I had two confirmations prior to arriving at the destination which took me a 5-hour drive to get there when I arrived there was no one at the business I called the number at the Business site and the business owners father answered his name is Alan I know him personally he pretended he didn't remember speaking with me last week about a rental there which I actually made the reservation online and I called and confirmed with him at the time that I made the reservation. It was a 5-hour drive for me to get there and when we arrived no one was there at the business I called the number on the website and the owner's father Allen agreed to come over and get us the truck. When he arrived he said he didn't know how to do the paperwork but he called his son who was out of town in Kansas City. The son walked him through the paperwork and he gave my helper the key to the truck which was located by a Creek in a mud filled area and it was stuck in the mud but my driver managed to get it out. The truck did not have a full gas tank but we didn't notice that until we got over to the storage area for blocks away I called Alan back and he refused to fill the truck up and told me that was the way Uhaul operated you just took it back and tried to get it as close to the same amount of gas as what was in it when you took the truck and that has never been my experience with U-haul before you always receive a truck full and you always take it back. Way there's not a guessing game as to how much you need to put it in. When we rented I asked Allen if he would be available later if we needed to rent another vehicle or a tow behind because I was unsure of how much room it would take to move my things. Allan assured me that he would be available and I said well it would be hours before we knew how much additional space we would need. He assured me that he would be around town and just calling back when I knew how much more space I needed when I called him back he then refused to come over to rent us another vehicle which we needed to tow behind so I had to leave thousands of dollars worth of my items there because I didn't have the money to pay for hers storage longer and to return to come back to get them I'm on a fixed income and it was impossible for me to come back to town again don't think it's fair that I had to throw away furniture and other items. I think if Alan son is the one running the business he needs to be there when people come to pick up their unit because Ellen doesn't know what he's doing.

Everything went smooth I appreciate the local pick up

No one was there, which was fine, but the place looks more like a junkyard than a place to rent a truck. Doesn't reflect well on Uhaul.

I was told that we could pick up the truck as early as 0900. Upon arrival at about 0915 no one was there. We had to call a number on the side of the building and wait for someone to take care of us, This wait time added approx 30-35 minutes to our trip. When we got into the truck it had a horrible strong cigarette smoke smell that made the trip even worse. It literally smelled like a full pack was smoked before we got in.