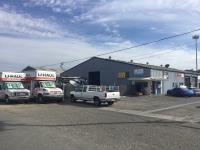 Be on time. Waited over an hour to get uhaul even after setting a time appointment

No my experience was disgusting, this place should not be allowed to rent U-Haul trucks...please call me to discuss 701.401.8008

Worst customer experience ever. Will never rent from uhual again.

Stay away from that location, they lied about the fuel level and charged me for 2 days

This uhaul was beat to shit. The gas tank was dented/creased all the way down the center. It didn't even had a gas cap. It has an air freshener (California Scents) lid DUCT TAPED to the gas tank. The uhaul was left on completely empty and I had to fill up immediately after leaving. With it not having a proper gas cap, I don't even know how much fuel I lost driving home, but I could see a trail behind left behind at every turn and every stop/go. I had to go find an auto parts store that had a gas cap for it and buy it with my own money so that I wouldn't continue spilling more fuel. The owner of the auto shop (which looked like a chop shop) was very unresponsive and didn't answer any phone calls or reply to any text messages when I voiced concerns of the lack of gas cap, etc. I will NEVER rent another uhaul from these people and will suggest that nobody else does either.

I don't believe it was completely the location's fault, but we booked a 26' uhaul and it wasn't available. We were told the previous customer had not yet returned it. They offered the 20' truck that was available, and we basically had no other choice but to accept since we were on a time schedule. It ultimately wasn't enough to move all of our belongings in one trip. It was very disappointing and we ended up having to pay the same amount for the 20' as we would the 26'.

Friendly and great customer service. Thank you for being a Good Samaritan.

I never went into the office so I cannot say. The guy who received the trailer was very helpful, physically moving the trailer into a parking space as I was not too good with the backing up of the trailer.

Fees outrageous I need someone to call me asap

We had an agreement for pick up at 7 am cause I had to be out at a certain time . I waited for 1hr and a half before they opened would not recommend this place at all

It would of been better if the person who actually work for Uhaul was the one giving me the trailer. The guy who did it was nice but he didn't work for uhaul was just getting coached from the actual uhaul guy on his phone. I ended up paying more than I had ecpected because I got stuck with the extra trailer insurance I didnt want or need I believe because the guy filling out the form online had no ideas what he was doing. So I hot charged an extra $70 and the trailer was dinged up pretty good. Didnt do a visual inspection with anybody for the trailer as the uhaul guy was not present. I got sent a link I could go online and put down what was wrong with the trailer but I could not access it from my phone at the time. Later on in the evening I got on a computer to fill it out but it had already expired. So I got over charged an extra $70 and was worried I was going to get hit with extra fees because the trailer was dinged up.

The owner wasn't even there when I picked up the truck. A person who rents space from him helped us between working with his client. He had a hard time finding the lock box key because it wasn't well located. The truck had not been cleaned since previous renters. We were at the location for 30-40 minutes just waiting for the key.

I left my son's laptop in the truck. They held it aside and protected it from theft for two days. I am very very thankful.

I waived the safe mover insurance they added on anyway. I called them they about insurance. They told me to call the 800 number. I did waited on hold for 20 minutes before getting someone. After she took 20 more minutes of my time she told me I have to called where I picked the truck up. I ask can you talk to them. She said she called them and they will removed it in next 5 minutes and call me. That never happened. I been charged for something I did not ask for. I did not know uhaul manipulate and rob their customers. This so unprofessional and unethical. I would like my refund.

Ensure gate has lock removed before sending customer off with the truck.

The person who helped me told me I didn't have to fuel back up before dropping Uhaul off at a different location. This person stated that the fuel price was already included into the $170.00 I paid then.. so not true!

I already called and was told I would get a call back about this issue. The biggest issue we had was that there was no levy on the truck, we asked for a truck with a levy, and they told us no. Then they made us wait about an hour and a half to get the truck. Both areas had bad customer service, and we struggled the entire time without a levy. Worse is that U-Haul won't even give me a call back to resolve this issue.

This guy is great. Knows how to make the customer happy at all times. I like to rent trucks from here, and I have never been disappointed ever. I recommend this location to anyone.

My rental was delayed by 30 minutes because the person with key to the uhaul key box was 30 minutes late to work, so I had to sit there and wait. Other than that, the rental was good.

The guy here is on point.

The guy here is so nice, cool and customer centric. He took care of the challenges I had regarding the truck. I would use this location over and over again.

The truck had mechanical problems, power steering was one of them