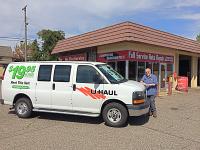 The place is a bit busy/unorganized, but the personnel there was helpful and checked me out quickly.

University ave location the general manager was horrible i booked reservation $78.00 he insisted on charging me $110.10. He was rude and told me no truck will leave his lot unless i have the $110.10. His coworker was about to check me out the total she gave me was $84.00. He came and changed her computer to say $110.10. She hunched her shoulders and said sorry I dont understand either. This is why I could not stick to my normal reservation and had to go elsewhere to Rice Street. Thank you Mr Tire for treating me fairly unlike University Avenue.

I asked about extra days and miles so that I would not have a charge when I returned the truck. I was told to talk to the return location. The web site also did not have this information.

Person checking us out was not very helpful, told us to find the truck somewhere in the back, location was very messy and unkept.

I feel I was charged an extra day. I had the rental three days and was charged for 4. I'm not quite sure why. If it's because I kept it longer than expected. But, i didn't say anything to the gentleman who ran my card because I didn't notice at the time we finalized payment.

Has that old grimy gas station feel and no moving supplies. The computer software was glitchy so it took quite a while but it is a convenient location to pick up a rental and has very friendly, helpful staff.

Tires on van had very little tread so I hydroplaned off the highway in Indiana when it was raining which was terrifying.

Staff at this location were friendly and helpful. Truck ran well and Uhaul staff checked fluids and set tires to proper pressure. Truck had not been cleaned in the cab nor outside washed, but cargo area was clean. Our computer reservation and information were not transferred well so the staff had difficulty completing the rental process - seems like a problem with Uhaul's online reservation system. But staff worked through the issue and had us on our way in about 30 minutes.

Convenient place to find nice gentleman who worked in there

person was smoking and there were papers alll ove rthe counter. Buisness was not very clean. individual was friendly but fustrated when the computer didnt work.

Proper information on the online drop off app was not given. Had to wait on hold for 20 mins. I still got charged and had to wait an additional 10 min because of the drop off issue. Clear concise written and voice information at pick up would be nice.

Truck was ready to go. Bob, the owner, was kind and courteous. Easy location to find off I-94.

Check truck for leaks. Had big leaks in the attic and in the box. Belongings got wet. Truck not available at the requested time. Had to go to a different location 6 hours later to pick up the truck. Overall a rather disappointing experience.

The owner was very friendly and accommodating to my needs. He made everything smooth and easy. He explained the policy to make sure I understood.

The person who was checking us in was rude and he was racist. Another customer who was awaiting for check out, to drop of the keys were in a rush. They kept rumbling off about how they had to go and if someone else could check them out. Then the person who was checking us in said, "you people need to learn our way and go back to where you came from." I've only heard this types of racism and criticism only on social media. Never thought to actually witness it. Bad experience. I would never recommend this place to anyone.

My biggest issue was not with the location that I was renting from, but the fact that my contract was changed. I had specifically signed up for a location close to where I was living and this was changed to a location across town. This normally wouldn't have been an issue, except that I had to pick the truck up after work. Going across a city during rush hour traffic can be a major issue. I had to call in advance and warn them that I was going to likely be late and arrive after they had closed for the day. It turned out that I arrived just before their closing time, but this issue/stress could have been avoided by scheduling me at the location I originally requested. Also, they had changed my reservation from 7 days to 1 day, which was another issue. It was resolved, but the mistake almost made my entire move fall apart. The people at the rental location were friendly and helpful, but in general the place was very dirty and poorly maintained. There were no issues with the actual truck.

Not sure why people only gave this guy 2 stars. He was friendly personal and at a convenient location. I will rent from here again.

Uhaul sent me to a location that was closed. The man so happen to be there, took over 45 mins to charge my card, and he did not have the dolly which I was still charged 7.00 for. Will not recommend!

We asked for a furniture dolly. We were charged for an appliance dolly instead. We were on a time crunch and the truck was filthy. It had troubles starting. The man was insistent that we get insurance because the last woman broke an axle on a vehicle. It wasn't until after the stuff was loaded in the truck that I realized that this was the truck with the broken axle. This was VERY unsafe to drive. There were a couple close calls because the truck's wheels veer right. It was like fish tailing for the whole 5 hour trip. I let someone know at the place I returned the truck so it could be fixed and the person after me won't have an accident.

Very messy office. Main contact was confused about operating the computer system. Did not feel legit.

Always remember to the call the customer within the time given to confirm reservation or for any reason. Do not keep the customer in silence.

Truck was great - new, clean and sound in everyway. Mr. Tire was very personable, honest and accomodating. I couldn't have asked for more.