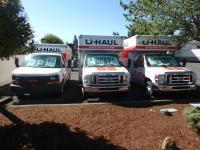 The loading box was not really clean, but it could have been worse. The folks didn't know how to handle our two certificates from our realtor giving us credit on our bill. It was finally figured out.

Nothing. Everything was great and the workers at the gas station we're very friendly and courteous!

I had a gift certificate for $40 off, when I went to pick up, the person that gave me the key said I needed to show it when I dropped it back off. When I did, they said they couldn't put that information in at the store and I was basically out of luck. Would not recommend.

The corporate certificate number was entered when making an online reservation, but in the end was not applied. I was also misinformed about the truck having a loading ramp; it did not. I had helpers for a limited time and could not get a different truck, but I had to pay them for their time anyway. When refilling the tank after only driving 11 miles, I paid for fuel beyond what I used. The clerks at the UHaul location are too busy pumping gas and selling beef jerky to be of much help, so it is pretty much do-it-yourself and they throw the keys at you when you arrive. The whole afternoon was a total waste and $100 down the drain.

Customer service was poor. Namely a guy named Jose working for the Chevron. Worst experience Iâ€™ve ever had and there is no way he should have a job

The location is a gas station that has only a few truckss. I was sent there by U-haul as they had the truck I wanted. I was not given any paper work when I left.

The young man, who checked us in and out, was extremely friendly and helpful. He answered all of my questions before I left with the truck. There were no surprises upon my return.

I reserved a 15' truck only to find out that it had a serious issue with the braking system and was making noise both when turning the wheel and especially when hitting the brakes. I work on a lot of types of vehicle and their was something seriously wrong with the truck. They did not say much other than yea seems like it has issues. I took the only truck avalible which was a 10' which caused us to make two trip and actually pay more in mileage fees. When I returned the 10' truck they had just put the 15' back on their Uhaul line as if to rent it again. I highly doubt it was fixed in the time I had the truck (4 hours). It is a great location which is why I would recommend it to a friend.

Found a half gallon of milk in drivers footwell. No dolly in truck when My brother and I arrived. Person checking me asking for all the info that was already on my reservation that I made on line.

Jose was great to work with and everything went very smooth. Would definitely use this location again. All staff was friendly and courteous.

The staff was great, and they knew exactly what they were doing.

Keep up the great work!

Damage to floor of truck caused a serious trip hazard, The facility did not know how many moving blankets were available and were disorganized. The did not provide a receipt for the rental, just the turn in document.

There was pizza crust in the back of the truck, it was 1/4 full of fuel and they didn't have the blankets I need to protect my furniture. In addition, the "$19.95" cost is misleading.

The vehicle was fine. The check-in/checkout process through the app was great. The location tried to cheat me twice. First, they overestimated the gas level. Then, they tried to charge me for another day when I brought it back only about a half an hour late. U-Haul is great, the app is great, the location is bad.

You guys charged us for an extra day when we brought it back in less than 24 hours. $71 extra for what!?? Like are you serious!? You guys are ripping people off. Filled the tank to the required level, cleaned the truck, got told if I had it back by 11:10am it was going to be $110 with my estimated miles used. Hope you guys get shut down never recommending you guys to anyone and will be telling people to definitely STEER AWAY FROM THIS BUILDING.

The truck wasnâ€™t ready at 6am. Had to wait an four fir chevron to open. Had movers waiting on me. Upon return chevron said their system was down and couldnâ€™t check me in. Did an on line check in instead. Called to complain after, the rep was complacent to the issues I experienced. Would not recommend chevron on Madrona in Salem Oregon. TIP: Call the night before to make sure someone has staged the truck and gotten it ready for pick up.

Employee tried to fight me Because my son threw garbage out the window. Insulted and cussed at my wife. Then tried to charge me additional fee. U-haul will never see my business again. As for the additional fee well guess what you can do with that!! Thanks Zack...

It would have been nice to know I was being charged for gas as well as mileage. That was not clear on the site, and the price ended up being excessive. I would not recommend U-Haul as a result.

Nice Uhaul, faster than most of them. Chick with dreads (R- something) was very nice, Saigal was very knowledgeable. 10/10 would rent here again.

Friendly, helpful staff (we dealt with two different people, one at pickup and another at drop off), quick in and out

I booked over the phone in Eugene and was told I had a one way cargo van from Salem to Eugene booked. It was After being dropped off alone in Salem was the first time I was told I had to return it to Salem or pay $240 to leave it in Eugene - two options I did not have the time or money and I wouldnâ€™t have booked this if Iâ€™d known. I called the Eugene location (west 7th) again and they were useless in trying to fix the solution and sent me to uhaul customer service. I spoke to a woman Roxanne who just retold me my options but didnâ€™t seek a solution considering I was stranded in Salem without transportation or the money to afford the options I hadnâ€™t been told of earlier. Finally, lance in Salem (the best U-Haul employee of all time) was able to cancel my original reservation and find me a bigger truck that I could drop off in Eugene and for a much lower rate as an apology for the issues I had dealt with. As a customer it is so infuriating to learn of these realities once I am an hour away from home. You need to have Lance serve as an example of working with the customer and practicing good communication. The woman in Eugene should have known I canâ€™t take a van one way and been clear with me as I prepared to spend a lot of money with this company. In the future I expect more of your employees to communicate and explore the questions and plans of your customers to an extent that ensures they will get where they need without draining their bank account. I am grateful for people like Lance in Salem who turned the experience around and genuinely considered my situation and financial limitations instead of expecting me to cough up $240 I donâ€™t have. Thank you Lance and absolutely no thanks to the Eugene or 1-800 customer service for treating me poorly.

I did not receive an email indicating the drop off locations available to me and I had to call in while on the road.

Although we had a pleasant enough experience with the location, we did have an issue where they gave us the "wrong truck" after we had already left and loaded up. We had to return, unload the truck into a parking lot and reload.