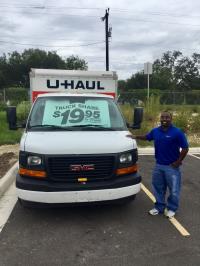 Location was easily accessible. The truck was dirty, not so much on the inside, yeah dusty and seemed like it had not been wiped in a couple of months. The outside seemed like some went splashing around and there was all sorts of trash on the bed of the truck ( ie empty water bottles, wrappers, etc). And then at checkout when I stated that it was dirty when I picked up, the system tried charging me for a clean up fee. It was not my mess so I didn't understand why I was being charged for something I was reporting. I had to go back and take my dirty comments off. I refused to pay for something I didn't do. The system needs to be updated to reflect the comments of someone reporting the state of which they find the vehicles. But thank you for the service. I was able to go pick up a table I bought and wouldn't fit in my car. I do appreciate your business. And yes I wild use U- haul again.

As an older customer I was unable to check in using my android phone. I had to have a member of the staff assist. Upon return, the staff member instructed me to back into a parking spot. I had to back in to a tight parking spot next to a large wide cargo van. I did it but it took a while. I don't think it was my responsibility to have to do that and if there was an accident I would have been responsible for it. I will not be renting from this location again.

It would be nice to have a person greet you and check you in. The only option at this location is an online check in, which is unwieldy at best. Had to do mine in a wind storm, which wasn't fun.

The office was actually pretty dirty as there was trash/dirt on the floor and trash cans over flowing. With two employee in the office the appearance definitely could have been better.

Just continue doing what you're doing with the great customer service & efficiency.

They guys took care of my, great folks.

the guy that was working at the desk. I dont remember his name but he was a short black man. I ordered a truck to move the day before I come to pick it up. when I showed up the guy told me there was no reservation under my name on his laptop and he started me all over. the next day I found that the location charged me a cancelation fee for $50. I nicely called and asked the guy that why they charged me for cancelation fee and he admit that I had called to cancle and said I dont want the truck anymore, which is a completely lie. what a point for me to called and cancle it then come pick it up. I had to called the customer service and they said there was no call recorded that I called to cancle the truck. I got my $50 refunded but I dont like the way that guy treated me. I deserve honesty!

We paid for an appliance dolly and were given a utility dolly.

The service was good

Location was OK, but the ability to pick up the truck via phone was ridiculous. Had to send information more than once, pictures at least three times, and since there was no one there to help, it was very frustrating! I don't think I'll be putting myself through that again.

My rental process was fast and easy, but a day after return I received a receipt that shows a $15.00 cleaning fee. I drove the truck 16 miles and put two cardboard boxes in it, left no debris or dirt in the cab or rear. Tried to call the office to speak with the gentlemen who rented me the truck 5 times and no one answered. I'm unhappy with the charge without explanation.

Kerry Rhodes was extremely rude and disrespectful. He charged my account with unauthorized fees. Nothing was ever said to me when I dropped the vehicle back off in regards to any additional charges being applied to my account. I called back up to the place to speak with someone and Kerry was very rude and informed me I was wrong and lying. I will never rent from this establishment ever again. The customer service I experienced was horrible and demeaning.

Kerry was very helpful and certainly an asset to this location and the Uhaul reputation.

I was charge 25.00 for leaving a gas receive and theirs flyer. They asked if I upload pictures of the truck. I was never advice you wher going to charge 25.00 dollars for a piece of paper. I will never use your service again.

Drop off was just a box, no representative was there.

Not an ideal parking lot, since the businesses are close together. Hard to park the uhaul in a safe spot. Additionally, the actual truck did not seem in good condition. There was something wrong with the engine or transmission, when we turned it on and any time we accelerated it was deafening. It sounded like it was about to burst or something!

We had the truck for 3 hours and moved a brand new clean sectional. They charged us a $25 cleaning charge because there was "debris" on the floor. Supposedly they sent us pictures on our receipt and said pictures were not there. The man was not helpful at all. $100 to have a 15 foot truck for 3 hours. Ridiculous.

When I called to make my reservation, I believed that I specified that I wanted to pick the 10 foot truck up at 3817 Parkdale Street in San Antonio. Because I don't have a vehicle, I was already having to ask someone else for a ride & help loading the truck...for which I had no money to pay them, being on a tight budget. Yet, I needed to move my belongings closer to me. As it turned out, I had to go 15 miles out of our way to pick the truck up at the 6923 W. Loop 1604 location. Though I was given mileage credit for the inconvenience to me, the extra distance added more inconvenience to my help's busy schedules. After returning to Temple...Sunday, November 18th, I received a notification to return the truck to the location on Range Rd., which is even further away from the 2 locations I was told I could drop the truck off at when I returned it. On any given day people are generally busy, & or simply unavailable for whatever reason...on a "football Sunday" it's almost impossible to get help unloading & returning a truck. Again, my budget was very tight, yet, I had to get this done a.s.a.p., & be ready for my 10-hour workday Monday morning. When I made the reservation, I was quoted a total of $180.00 for the truck, which included a $10 fee. At the pick up location, I was told I'd be paying $198.00 AFTER TAXES. No on had mentioned the addition of any tax prior to that moment...yet, I needed the truck THEN! When I returned the truck at the Temple location, we were all pressed for time, so I had to leave & stated that the receipt could be emailed to me. I was told that I was to be billed by the pick-up location, then I was told that I was to be billed at the drop-off location (which made more sense). As it turned out, it almost wreaked havoc on my account, because the payment didn't clear as quickly as it should have (based on the timeliness of my financial institution's processing practices/protocol). I had kept checking my account balance to take care of other things (knowing what I had to work with)...I thought the amount had already been deducted & it hadn't. By the time I realized this fact, I had to make a quick adjustment...By The Grace Of God I was able to avoid added fees. Yet, I did have to pay for the adjustment. IN THE FUTURE It Would Be Good Business Practice To INCLUDE TAXES & ANY OTHER ADDED COSTS WHILE QUOTING RENTAL CHARGES...Whether On An Unlimited Income Or Strict Budget...It Shows Genuine Concern To Customers. The Practice of Having Customers Pick Up & Return Rentals To Out-Of-Their-Way Locations Is Un-Ethical & Overrated.