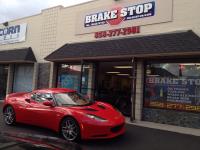 I had worked with Richard in the front desk for two days, and he is incredible! My order was somehow cancelled a day prior to my move which made me very nervous and anxious! However, Richard reassured me and was very patient and professional and managed to work it out for me. He also gave me a great deal which definitely convinced me to use their service for my next move! I totally recommend Uhaul for anyone that is looking for a fast and easy move!

The uhaul site was down so I couldn't return after hours easily. Took 20 mins to return on the phone with someone which was frustrating. But Staff here was friendly

The customer service at this particular service location was exceptional. The best experience I've had. Very helpful and knowledgeable sales representative. I would definitely come back to this specific location. Extremely thankful for the assistance and customer care.

The guy was not courteous

Was charged for 24 miles . When it is literally impossible that i drve the uhaul 24 miles. 2.1 miles from site to my home .. no more than 1 mile to the site i dropped stuff off at at most .5 to get gas ..and we will just say 2.5 miles back just to over estimate. Thats 6.1 miles i requested the uhaul for 15miles .i was clearly over charged . I guess its my my mistake for not taking a picture and trusting the integrity of the company.

The van was filthy on the outside and the staff is dishonest. I rented a cargo van and when i went to check the fuel gauge for cross comparison of the contract and the actual indicator. The indicator was less than the contract noted. I immediately returned to the counter to dispute the contract and was met by 2nd staff member, different from the one I initially met with. The 2nd staff member requested I show on the contract where was the fuel gauge in the van. I showed him and he corrected it on my contract and he initialed the change. Upon my return of the van, I took a picture of the fuel gauge because I only traveled 17 miles round trip and did not refuel the van because the fuel gauge was where it was when I picked it up. I took a picture of the gauge. Afterwards, I proceeded to the counter to close out my contract and the 2nd staff member requested I hold off leaving. He inquired if I had refueled the van and I responded no because the gauge did not move and I only traveled 17 miles round trip. He proceeds to tell me the gauge was not where it was and I was being charged for fuel. I told him the gauge did not move and I had a picture of it. He and I debated and both walked to the van to see the gauge. He argued with me about the location of the gauge and I stated I will not argue with you and I will go to the gas station to put in some fuel, which I did and paid $5 for additional fuel. The gauge moved beyond the point where it was when I checked out the fuel gauge originally. Afterwards, I returned to the counter and the 2nd staff member went to the van and returned to tell me the gauge was not where it needed to be. I debated with him that it was and he informs me I will be charged for fuel and an extra $25. I told him I will dispute the charges with my bank if he charged me any extras. The 2nd staff member was rude and argumentative and dishonest. I have been renting from U-haul for over over 40 years, from the east coast to the west coast and I never experienced a more dishonest a...hole.

First, the man who assisted me was rude and not helpful. Then I asked if the truck had been sanitized and he said yes which the truck was filthy. Then they overcharged me. Will not use this place again.

Great customer service And was there when I was truly in need!

When I received the vehicle at this location it was dirty and has nails in the back that ripped my mattress... not to mention the bad customer service, it was literally here's the key park right in front when you drop it off. Didn't even check if it was clean or unmarked.

I was late returning the van due to unexpected problems disassembling the furniture to be moved .....1 million screws to be removed and some were stripped!!! I called to tell them that I would be later and they told me not to worry. I did not get back before they closed. They were so understanding and kind. Would definitely recommend them as they were a small outfit but close to my house and their people skills were outstanding. Thank you very much . Please use them if you have anything that needs a moving van or truck.

I was charged some sort of insurance deduction fee without being asked. This never happened to me at other locations.

I was satisfied with the crew and the services offered by them. HOWEVER, U-Haul website needs to be updated showing that this location only has "at the counter" check in. They do not have automated check in capability. All customers need to go in to the store and interact with the store employees. Pls note that the employees were efficient and courteous.

I paid in cash when I returned the uhaul and they still charged me on the credit card I used for the holding fee upon picking it up. They double charged me and when I called and told them they double charged me they told me they couldn't do anything for me unless I had my receipt, which I understand but I just moved and am having a hard time finding it. I signed a receipt after paying and it wasn't that long ago so they should be able to look for it and see that I paid in cash. I returned the uhaul on July 1, 2020 between 5-5:30pm. I don't remember the mans name but you can look at who was working that day and go from there. It's frustrating because the one time I go in to handle a uhaul by myself, with out my boyfriend I get taken advantage of. I've already had to put so much money toward moving and now the uhaul I used is stealing money from me. I was told I could pay in cash when I returned the uhaul. I brought exact change, a man from the back came up and helped the man upfront do the cash charge and I was told I wouldn't be charged on the credit card for anything and now I have to pay my uncle another $67 because it was still charged after I was told it wouldn't be. This uhaul experience has been the worst and it's really sad that I have to make sure a male comes in with me to make sure things are taken care of the right way and my money isn't being stolen if I pay in cash. I will be telling everyone I know this so they won't be scammed as well.

i asked 3 times it suppose to be 29$ but he didnt answered me and charged 40$,i didnt want covarege but i see he chatged 10$ covarage.thats why he disint answer i think

The tire light kept coming on, and we lost air in the front passenger tire. We stopped at a gas station and put air in the tire. About 20 minutes down the road, the light came back on. We had to stop at a UHAUL center, they said they couldn't help us, and we had to call the UHAUL Break-down number. Within and hour, we were back on the road after a tire change, but again the light came on hours later. We aren't sure why that kept happening, but we put air in the tire and went on our way.