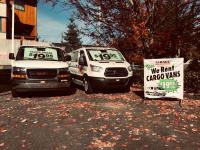 I scheduled a pickup for 7am using my phone. When I got there 7am, there was no lock box on the van and had to wait until 8am for the manager at the location to give me the keys to the car.

Make sure that appointment times and vehicle availability are accurate. I reserved weeks in advance for a van to be picked up at 9am at a location near to me. Instead I was told that the location would not open until 10:30am and that there might be no available vehicle there. Instead I was asked to go to a different facility to pick up another vehicle that did not even have a dolly that I requested. What was the point of reserving early???

The automated process was too slow and complicated.

There are no UHAUL helpers at this location, which isn't good if you run into problems. When I used the UHAUL, I incurred a toll bridge fee. I understood that I would be responsible for the fee when paying UHAUL. They did not pass the fee to me. Instead, I received an expensive ticket in the mail from WSDOT because UHAUL didn't take care of the matter on time. Extremely frustrating. Overall, easy rental process. I wouldn't rent here again; I would choose an actual UHAUL location in the future.

Had to call to get the correct pin for the keys. When returning the vehicle, the return process didn't let me put in the true mileage and I was overcharged.

Specified u-haul was not available, so I had to call and was put on hold for 15 minutes

Key was not in lock box so I had to wait around for the manager to show up. Instructions in mobile sign out process were to leave key in a drop box which is not how it was done at that location. It was fine and we figured it out so no harm done but it would be helpful to make the process clearer in the future.

The keybox on my vehicle didn't close properly so I couldn't return like instruction. I had to leave the key with the store manager at the location

I reserved the van and expected to get in and drive off, not spend 45 minutes filling out an application that then needed to be reviewed and approved. Next there was a "Parking Brake" issue that I had no clue how to troubleshoot, there were no directions on how to turn the "Parking Brake" on or off. That took another 30 minutes. Now here I am dropping the van off without a clue of what to do with the key. I was not given instructions and I've been on the phone with someone for 10 minutes, then I was put on hold cus she couldnt help. She tried to tell me to leave it at the gas station counter. They did not let me leave it there and told me I had to unlock the box on the Van's window which I didnt have the code to. She transferred me to someone else who told me the same thing and that obviously didnt help and he couldnt get me the code so he forwarded me to another person (all together took 10 more minutes) You need an insrruction/how-to booklet for this!!!! This was absolutely ridiculous and terrible service. I spoke to 2 representatives and was on hold for a culmination of 20 minutes until the line just went blank. So I called AGAIN- my phone was on 17% and it was my only way back home, so after being on hold for being on hold and speaking to Kathy, for another 20 minutes I was finally able to lock it up and leave.

I was told it could drop my U-haul off at a different location and was then charged over $100 for not returning it to the right location. Educate your employees are don't screw your customers

I was charged for two rental periods despite having returned the rental within the original reservation times. Further, the gas station attendant on site was extremely rude and refused to provide assistance with locating the key box.

Location was good, the guy of Shell gave me some useful suggestion when I met issue with U-Haul. While U-Haul experience was not good, the truck I booked at first time was locked and the key was inside! I could do nothing but wait in the cold weather with online chat. I hope the customer trouble shooting experience would become better.

For a first time user the mobile app is a challenge..particularly....after uploading my drivers license (I should have been required to do this when I made the booking, not standing in the rain next to the truck) I got a â€œawaiting approvalâ€ message but there was no indication how long it would take, it took 8 minutes for someone to respond...which iis s FOREVER when standing in the rain with no ride of the truck. No phone number more to call. Also, during return the wizard said put the key in the key slot, but I had a key box on the truck, no problem except I did not know the code....again no phone number for help, it turns out after 10 minutes I checked the 4 keychains attached to the key and one of them had the code scribbled on it....the system should be better than that. Truck great, app was not

Nobody at your company knew this location is just a rented parking spot. We finally figured we would do it all online with the window lock box. The first van had no key in the box... your representative called the gas station telling them they will be fined for losing the key. THEY JUST RENT YOU THE PARKING. We switched to another van at the same location. This all put me back by almost an hour, adding 45 minutes to my trip as we moved into rush hour. On the return, I couldn't close the lock-box, I no longer had the combination. I called and the representative gave it to me but the number had been punched and I didn't know how to reset it. Your representative "I'm not familiar with how those work"...THAT'S YOUR JOB! Put me on hold to ask a supervisor. While on hold, I figured out the box, locked it and hung up. NOBODY knew the process for this location. Abysmal

everything about the rental experience was fraught with frustration and confusion, I would rather carry every item I own from place to place than use a u-haul ever again

Using the app to submit my passport photo didn't work. I had to use the browser to be able to submit a photo. Then the site told me to go inside to get my key, but this location was phone pick up only, the key was in a lock box.

The first location I was picking up from closed early, leaving my friend and I stranded and having to walk more than a mile to the next one. Additionally, my estimated price was one third my final cost.

Everything was great and easy to use the app and was fast and convenient for me needing a work van in a pinch. Thanks

The uhaul didn't have the key that was rented, and there's a mistake in my billing that said I had it for 2 days rather than the 5 hours I reserved it. And I just got off the phone with billing who was very rude on the phone. I even called before I got billed to make sure the uhaul return was sorted out but it seems that I was charged for an extra day. I'm very upset and will never use your services again and I will never recommend you.

There is no dropbox for keys (or I could not locate it) and the online instructions for key return are not clear. Had to spend 20 minutes on hold before I spoke with someone about returning the keys. Those instructions - leave keys in can and 1 door unlocked - felt very insecure.