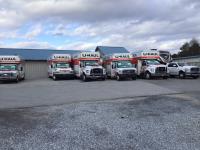 First let me say, while the person who ran this location was nice and friendly, when I went to pick up the equipment i had to call him on his phone as he a note on his door to call. Again he was nice on the phone, but stated "he does NOT let people into his office during this pandemic". Thus he told us he would complete AND SIGN for us on all the paper work. I was VERY uncomfortable with that and thought it was very wrong as anything could have been added in and me not see it till i was charged for more then I had agreed. While the charges came out ok, I thought this was very wrong. As for the equipment, the straps where very dirty and once I got it to my residence it took me awhile to get the straps working again so that I could even get them to release so that I could properly use them.

The tow dolly had heavy oil/grease all over everything! And it smelled really bad like gear oil. Straps were rust and difficult to use. The owner of this location was miserable! This was the second time I have rented from this location. All he does is complain about Uhaul. Need to get rid of him. He's not a team player at all! I'm not renting from this location again.

The guy was super arrogant, took forever to get me taken care of, he was complaining to someone that stopped by to see him that Uhaul wasn't worth all the hassle for the money!!

We dropped off U-Haul on Monday the 5th. Mike was called and when we showed up he came out told us where to park the Uhaul then said I have to leave. We should not be charged for another day.

I've never felt the need to leave a negative review for anything before but the customer service here was horrible. Upon arrival I called the number on the door, without any response after awhile I removed the trailer myself (this was during business hours). At that point a man came over and grumbled that if I had any common sense I wouldn't have taken the trainer off there (in front of his building). I told him because there was no one to check it in I wanted to make sure it was in view of the cameras. I started following him into the building and he shut the door in my face. I started taking pictures of the trailer since it was obvious I wasn't going to get a receipt. A gal then showed up and demanded to know why I was taking pictures. I told her since it wasn't checked in I wanted proof that it was in good shape and asked her for a receipt. I started following her into the building and again had the door shut in my face. I waited outside 15 minutes and decided that was enough. In all the years I've used your equipment I have never been treated so rudely. I understand everyone can have an off day but this seemed much more than that. I did get an email receipt later that day.

When I returned I called the location and the guy was really â€œput outâ€ by me calling and got pretty upset because the area to park was full of other trucks so he had to figure out where he wanted me to park. He was out of town which was no big deal but he was pretty rude on the phone about me showing up to return (the place was where I was scheduled to return and on the contract). Then today I receive an email for gas charges of $52 and showed the gas level being under a half tank. I put gas in it a mile from his location before I dropped it off and filled it up to 3/4 tank. So I'm hoping this will be resolved because there was obviously some confusion on his end. He checked the wrong truck in or didn't check the gas guage and submitted the wrong amount. I picked it up with 3/4 tank (on the contract) and turned it in with a bit over 3/4 tank. I emailed U-haul so hopefully it gets fixed. Other than that the truck ran great and was clean.

it took me 45 minutes to get â€œapprovedâ€ for the uhaul. was pretty unhappy with that.

We had to wait 30 minutes on the man he was mowing grass. He was rude

Have use this dealer several times with personal and business moves. Great customer service!

Very poor customer service. Poor attitude and reluctant service. Had to go find him when I had an appointment.

Truck wasn't clean there were dirty furniture pads in back, not a good thing with covid 19. I was a general manager with U-Haul in Tampa Florida and I never sent a truck out like this. I know neighborhood dealers don't do the job a center does but you gotta care just a little.

Mike was very good with us moving from Florida an had a storage unit we rented he was very helpful!

Proprietor seemed very unconcerned about checking equipment in when he finally arrived. Again thanks to Heather as she checked equopment in after pictures were texted to her phone.

google maps took me to Budget Rental several miles away. I was told by customer service when I ordered the truck that the location opened at 8:00 am Sunday, but they don't open until 11:00am.

Nothing, it's absolutely perfect and convenient.

Mike, was very courteous and helpful.

Drop off after hours NO body was there Office door locked

I enjoy using U-Haul. It's been easy and the customer service is great. However the 2 times I have used U-Haul the gentlemen I deal with at the locations have been very short tempered. And not friendly. But U-Haul is self is great. I ordered a 17' truck but one was not available at my pick up location. So they gave me what they had (26' truck) for the same price as the 17' truck.