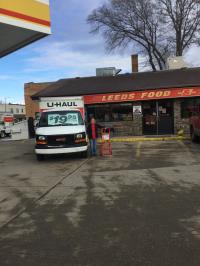 I think there should of been some kind of refund. The truck wasn't due back til monday and we returned it the same day we rented it. But it cost us an additional 17.00

Stop chargeing so much money or tell you clients up front that its 1.09 per mile and mention that you take ther deposit if you dont fill the tank up ill never use come to your company again

Thanks for your great service... fast, organized and with a smile.

Rates to exstreamly exspensive I only had the uhaul from 11:30 am to 3 pm cost me over 75.dollars for about 3 hours I think you should come up with other pricing for customers who only need to use a u haul for a short time not to mention I also had to put the gas back to where it was and I put it above what I used this was truly over priced

When renting equipment actually give your customer the equipment paid for. Check gas gauge before leaving. Was told it was 3/4 but left with it at 1/2. Wasnâ€™t given furniture pads that I was paid for. Given the one hour wait for the truck I was not going back to deal with it. Out of all of the times I have rented through uhaul this was remarkably incomparable to my other experiences.

She was a flake. Whoever called us was also flaky.

Did check in online hoping to speed process along faster.... NOT. Took close to 2hours to get truck. Did not have appliance dolly that I ordered. According to what I read it was to be simple process. They had nothing ready, didn't show us how truck worked or anything like what it stated online would be done. Very upset. paid lots of money,for nothing more than headache after another headache. Will tell all not to waste their time or money going through Uhaul.

The cabin was very dirty, Clerk seem like she was not sure what she was doing. Forgot to mention that there was a fee for insurance. Which I didn't need, because my Insurance is covering rentals, cars and trucks as well.

the lady at the desk was not helpful at all. she kept taking other gas station customers ahead of us. she also kept complaining we brought the truck back early. no where to park the uhaul.

Truck wasn't clean when I got it, but thankfully they did not charge me for it being dirty. Very long phone call day before to rent and give info and then very long day of to finish payment etc bf getting on the road with the truck.

Although the cashier was new and didnâ€™t know the U-Haul application process, she apologized and got someone on the phone right away to show her. In less than 30 minutes I was in a U-Haul truck. It was my first time ever renting a truck but it was easier and cheaper than I thought! Thank you Leeds Food & Fuel!!! I am very happy.

This location did not check the drop off box for the keys and reported the truck missing when we actually dropped it off the same day it was rented. I was very unhappy to get an email stating that the truck was not returned and that the police would be called. I was charged more than I was originally quoted because of the cashier checking the truck in 16 and a half hours late. If uhaul is going to have locations at gas stations they should choose gas stations that are open 24 hours and eliminate the need for a drop off box. I will not rent from this location again.

Cost prohibitive for short time local rental $70+ for two hours and 50 miles. Will seek other alternatives.

Didnâ€™t get a receipt and the person helping me was not able to get to that location on the system. Appears as though the same type of issue as where I picked the truck up. Poor software.

they acted like they didn't care if we rented from them. also the back of the truck was dirty

Again, there were delays due to not having qualified people on hand. U-Haul had to be notified twice to straighten out issues with drop-off and a mileage credit which was promised to me due to a change in pick-up location.

Very convenient location for our needs. Staff was courteous & wanted to make sure the truck was in good working condition when we returned it.

Clerk was waiting on customers for the store while she was helping me. Very slow. I walked out of the place 30 minutes AFTER my reservation. When I returned the truck 3 hours and 52 minutes later, I was charged an additional day for the truck and insurance. Clerk said it should have been back at 4 p.m., however I rented it for 4 hours. Will never go back to this location. Clerk said I would need to contact UHaul if I wanted to dispute the charges.

My check in lady was not adept at filling in my information on the computer. She even asked me if South Dakota was in the state of Nebraska? No. They are two different states. My check out man was extremely rude and very confrontational . I did not appreciate this after a long day of moving. Both of the employees were not familiar with the U-Haul experience as the U-Haul facility was actually inside a gas station.

I never rented from Uhaul. Someone hacked my account and used my info to book a damn truck. Yeah. Never used Uhaul. Never will, now.

The lady who attended to me was as sweet as can be, /but I spent almost two hours getting the truck because of time spent on the computer. I could have preregistered to make the process faster. The truck was clean. Return was fast. It will also be helpful to leave an instruction manual in the vehicle as to the most important parts of van. Otherwise it was so useful.

Horrible. Took hours to both pick up and return. Asked for a refund, was not given one.

Took almost a half an hour to rent it. Folks there had almost no idea what they were doing.