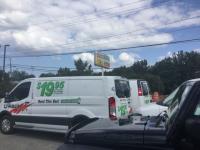 The vehicle was clean, but the tires did not have good tread and were terrible driving in Vermont winter conditions. It was a snowy day and safe tires should be of importance.

Very friendly and we got a free ride to the airport!!!! Thank you David and G!!

It's Vermont. It's winter. The truck was from Arizona and had no snow tires so it wasn't able to get all the way in on a slippery driveway. Rent your trucks in the areas they're prepared for? That'd be a good thing.

Prefer to utilize a location that has a maintenance facility so the trailers can be managed better.Overall I like U Haul as a company.

Keys for my 24/7 pick up were not in the box. The in-store rep at Rent-A-Wreck was very helpful, but overall, ownership removing the keys from the pick-up box ruins the entire experience. Combined with issues with the 24/7 Pick Up procedure not outlining everything that was necessary for successful pick up, I will not be using UHaul's services in the future.

We dropped off the truck on Sunday and the location was closed. They did allow my husband to park his vehicle there over the weekend so that he would have a way to get home.

Didnâ€™t have the cargo van. Gave me the 10ft no additional charge which was nice. It was dirty with a check engine light on. Couldnâ€™t find the keys when I got there. Asked for a receipt When I returned and it took 10 mins to print it. Not because of printer issues but because the guy was doing something on his iPad

Exceptional Service! Everyone was extremely friendly and helpful. The truck was clean and like new. A++++ Thank you Sara and everyone at this location. I will be back!

Supposed to be open by 8:30an but nobody arrived until 8:35am and then said she had to wait for the system to boot up. I signed up for the 24/7 pick up/drop off but I wasnt able to pick up until they opened because I got an error message saying no equipment was assigned to my reservation. Then they lost the key to the drop box which was also where the key to my reserved van was. I asked if the 10 foot truck in the parking lot was available instead of the 9 foot van I had reserved and for the nearly an hour I was waiting for them to find the key, I was repeatedly told they would give me the truck I stead of the van. After they finally located the key after 9am, I was given the van key and told the truck was already reserved. If that's the case, why offer it to me? Then I asked that my reservation be extended as I had signed up to have the van for 6 hours starting at 830am, but didn't get it til after 915am.....I was told it would automatically be extended since I technically did pick it up til after 915am (because of them) but I started getting alerts that the van was due back in 5 hours, not the 6 hours I had rented it for. The whole thing was awful and completely avoidable!

I have rented from this place a number of times now, and they never fail to get it right. Customer service with a smile keeps me coming back. The other location near me on Riverside Ave. doesnâ€™t even come close, that one is run by angry elves!

Nothing at Rent a Wreck, they were great! but I initially reserved the uhaul at Agway. No one told me that Uhaul could change the pick up location and time with notification to the customer being in small print on the confirmation email. I had to switch my plans to move my elderly father with people helping me. Then when I called Agway the woman was not professional.

I usually have great experiences with U-Haul but at the location where I picked the truck up the person was rushed and totally uninformed. After a five hour trip I learned I had to drive an extra 20 minutes to drop the truck off. Rome was fine.

Little surprised when the hatch came off during the tow. Also a lot of swaying.

They were very accommodating from pick up to return. Honest, no extra hidden fees.

The vehicle was extremely dirty. The inside of the windshield was almost frosted because of dirt and condensation. There was also a severe buzzing noise after the sun had heated up the front of the truck. Made conversation impossible

I was really impressed with the service at Rent A Wreck. When my husband and I arrived our truck was ready and waiting for us with our auto transport hooked up. When we saw the truck in person, we realized we would need a bigger one. Jie and her husband were quick to offer us another solution (they had a 20' truck available!) and gave us options for picking up the auto transport at a later time. We got step by step demonstrations on how to hook up the transport and how to secure our car. Everything went really smoothly on a day that could have been very stressful! Thank you!!

Sara was the best! Excellent customer service. She even called us to make sure we arrived safely!

Neither of these locations was my first choice. All three dealers complained of U-Haul's computer system and had trouble either with me or another customer. The Rent-A-Wreck South Burlington location is entirely too crowded, entirely too close to the busy road,, there is no parking and no turn around space. This results in stopped vehicles in an already crowded and overused shared driveway. Also I left a battery light in the cab of the truck. I dropped it off Thursday evening before closing time and yet it was gone by the next morning. The agent seemed helpful but my battery light is missing. Perhaps the door should have been locked overnight after the agent parked the vehicle.