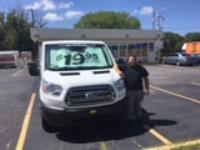 Really nice people here. Best U-Haul experience I've had, and I've had many.

They were open until 8:00 on Saturday, so I could drop the van off late.

Big Mike was amazing. The best experience I have ever had with U-Hual!! He was fast and accommodating, and truly the nicest man.

Easiest process Ever and the vehicles are always so clean and immaculate. The only uhaul I will go to in Tampa area!!

Good experience on all dimensions

These guys are awesome, easier than going to retail uHaul location. Have to get a van again next week I will definitely be Going back to them!! These guys are legit.

Big Mikes Food Mart was quick and easy. Very nice service and no paperwork! Everything done on phone/email which is perfect!

Price per mile is outrageous

Very good location and will use again. We had two very bad experiences at two other UHaul locations on the same say and Big Mikes was the best.

Horrible, the truck smelled awful. And I feel I was over charged!

Very nice people to work with when renting

The location I picked up the uhaul was very disturbing Very dirty the owner or manager who ever he was, was allowing minors operate the uhaul business the kid was about 12 I would say also allowing him to drive the uhaul and with very nasty attitude also the manager started screaming at me and I mean literally screaming because I was going to bring my 10 lbs shih tzu in the uhaul because my car does not have ac and it is very hot I removed the dog after he said it was not permitted And he continued to scream and use profanity threatening us saying he can cancel our â€œshitâ€ if he wanted too and threatening to charge us as much as possible for the uhaul just giving us a very hard time after we paid we were literally driving away and he jumped infront of the uhaul so we won't move until he finishes screaming also proceeded to Tell my boyfriend (David Buitrago) threatening saying to him â€œYou better get my women before I doâ€ like if he was going to do something if a manger could give me a call I would like to make a report of some how against this man for harassment the manager of Big mikes food mart ! They are not setting a good image for uhaul and because of that experience going through a â€œthird partyâ€ such as not uhaul location to pick up vehicles i will never recommend ever & I honestly would want a full refund because the service and the uhaul truck was terrible and disgusting . I toke the uhaul anyways because we needed it to move we had no choice . Please have some type of manager contact me 813-481-0480

Guy there was rude. Truck was disgusting. I had to clean it before I used it and I'm not sure it was sanitized and if I end up with COVID I will be suing U-Haul. Also they â€œlost my rentalâ€ at first and I had to wait an hour just to get my rental.

The gentleman in the morning was very professional but the guy in the afternoon didn't want to get off his behind to walk the truck with me. I insisted he walked with me to view the truck and that he provide me with a receipt and he was mad about that. He claimed areas as damage and I wiped it off. Then he pointed and touched an area where a small piece of the decal was pulling off - there was a small scratch just above it that could have been buffed out. I took videos and pictures of the area and when I was doing that, the other guy got in the van to move it across the street to park it even though their reason for not giving me my receipt was because they were waiting for someone to come and check out the van for this supposedly damage. I purchased the insurance but he charged my Amex card for $110 quick claim that I did not authorized. I do not believe this location should represent your organization.

Poor experience, charging me for coverage I didn't want and charging me a cleaning fee for no reason I can think of.... Oh and took about 45 minutes to get going cause of a problem signing me in, the difference between 730am and 815am is huge. Overall disgrace, not pleased.

Remove this location from your program. It makes me never want to use UHaul again

Very impressed with the truck

Attendant was unprofessional. Took over 1 hour to pick up. When returned attendant would not come out to inspect the vehicle, told me to take picture of the odometer. Then tried to charge me a $25 cleaning fee which UHaul waived upon inspection of the photo...

Used a van for a few hours to move a few boxes and was charged a $25 â€œCleaning fee.â€ Rich considering the van had some garbage in it when I picked it up (book, tape, etc.). Rip off! Negative yelp review posted.

I will never rent from or recommend Big Mikes Food Mart. They're scammers!! I retuned the van back to the shop and the employees inspected the van and said that I was good to go. When I got home I saw a charge for $750. I went back to the store and asked why I had been charged. They claimed that I had damaged the front of the roof. They were very unprofessional and were unwilling to show me where the damage was. They kept pointing at the photos I had taken telling me there was damage there. I went to the van several times and there was absolutely no damage to the area that they were claiming I had damaged. I tried asking them several times to come show me the damage but they were unwilling to walk outside the store and show me. They were uncooperative and very rude, and told me that they were trying to leave because of Ramadan. Horrible customer service!!!