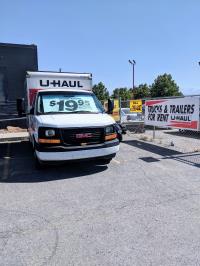 It was in a basement of another building and difficult to find. The first person I talked to informed me he didn't work there but would get someone to help me. The man who did help me was nice.

Dont charge me an extra day for 20 minutes. You should be ashamed of yourself. UHAUL Sucks

They don't know what they doing !!!!! The guy spend more time complaining on how much he hate uhual rather than correcting what I got charge for the trailer cuz he overcharged me

They didn't charge me extra for keeping the trailer later than expected due to unfortunate circumstances and I really appreciate them for that! They're really nice and friendly as well!

Corporate failure not location: This reservation was correct on line but was messed up when I tried to pick up the trailer. Her screen showed one day, local, but it was actually 4 day, one way. Charges were different but lower, my credit card was charged first then attempted 4 other charges of differing amounts. This triggered a fraud alert which took 30 minutes to correct. I was at the pickup location for 2 hours, so much for pre check in to save time. District Mgr. Jaden was flippant on the phone because I received a discount from him which should make up for all the confusion. Not recommending Uhaul to anyone. If you want to speak further let me know.

The UHaul agent i dealt with was very professional and helpful.

The agent was very helpful, and explained everything great and well, great customer service.

This is the 2nd time that we have had issues with this location!! We decided to give them a second chance thinking maybe last time was a mistake. But they messed up our rental charges again!!!

No room for parking and had to manually lift my trailer and put it in its place because there was no room to back up. Cars everywhere and the staff Was super unhelpful. It's impossible to find and the last thing you want to with a trailer is make u-turns. This was the worst location I have ever been too and would never recommend anyone ever go here

Our experience was absolutely terrible. The woman who we were suppose to meet never showed up, we had to work with someone who didnt speak english and didnt know what they were doing because they did not work for or with Uhaul. They called the lady over the phone and it took excessive amount of time just to get on the road let alone explain all the ins and outs. We ended up with an extra $150 fee for "extra mileage" which we were not made aware of.

This was a very difficult location to find. My equipment was not ready when I arrived after requesting and setting an appointment more than a week in advance.

Such a ghetto place! In a creepy basement and looks like everything is from the 70's yuck!

I was charged extra after the fact, in the beginning I was charged for 10 miles and I ended up using 34 he said it was 79 cents a mile if my calculations were right it should have been an additional 14.22 cents not an additional 40.00 dollars. That's pretty crappy service and I didn't have alot of money at the time for extra expenses. I will never go to uhaul again I will shop around and choose someone else.

Didn't know what they were doing, didn't have all the equipment we needed, got overcharged. I would never use uhaul again based on this experience alone.

bigger sign or something. location was difficult to find being behind other businesses and off the main road

I called to make a reservation, and they suggested 8 AM. I was running a little late and arrived at 9, but no one was there. I drove all over town frantically trying to find a truck, and was eventually redirected back here. When I arrived back at 10:15, the receptionist said she couldn't help me and sat down to scroll through Facebook on her computer while texting. Finally, 20 minutes later, someone came to help us. When I complained, he said we just hadn't waited long enough and was unwilling to give us any sort of discount or apology for our wasted morning. We didn't leave the dealership until 11 AM. There were holes in the wall and the whole place felt like a dump.

The employee that took my rental back was very Unknowledgeable. I rented the truck for 6 days but only used it for two. I've always rented for more than what I needed it for and always received money back from what was quoted. But now I'm being told I'm receiving no money back. I have used uhaul for every move that I have done since 2007 when I joined the US Army. If I am not reimbursed for what I did not use, I will make sure that word gets out to anyone and everyone I know that uhaul does not deserve business.

Kind of a shady place, had a truck to rent, gas gauge was wrong, returned the truck, next day got a email saying I didn't return it??? I put the contract and keys where they were supposed to go!!! Gentleman wasn't there!!! Overall thanks!! Got my things moved!!!

The man who helped us did not understand what we needed. I ordered a truck that was listed as $29.99 to rent plus 99 cents a mile, we ended up paying $133 up front and now we owe $31 more even after we put gas in it to return. This has been the most ridiculous and horrible moving experience and has caused us to not even be able to get our groceries for move in day due to the lack of understanding from the man at this place. We will NEVER be using Uhaul again.

Truck was dirty with snow all over it. No one was there to assist me. Was no dolly in it when I requested and was charged for one. Service was terrible.