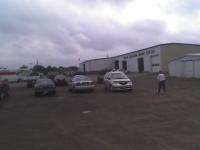 Nothing. Larry, the representative was great and efficient. Thanks for everything Larry.

A phone call ahead of time and let me know that my location was changed. I put an extra hundred kilometres on just getting the truck and returning it from the original location that I had asked for

Hello Rick, I was reluctantly provided your email address after four attempts to acquire it . The front line staff and management were not willing to provide the email address for me to contact you directly until I let them know that my contact them was recorded through my business phone.Â  From the moment I entered the location through the service entrance I was welcomed by one of your staff and asked what service I was coming in for. I responded that I was coming there for a return of my UHaul. As each staff member entered and asked me why i was standing in your entrance i let them know i was there for Uhaul and they all said "oh" and walked away as if my value as a customer was extreamly low. They also all stated that would be waiting "a few seconds" for the attendant to arrive. I asked are we talking a few minutes or actually any second as my two small children are in the vehicle with their pajamas on due to the request to return the truck in the early hours today to your location. As the minutes passed by I expressed the need for me to check in that this u haul and get out to my small children. I was laughed at. not by one of your staff but by all of them. I asked them in frustration what they might do in this situation with their kids in the car . A few of them said in concern they would just leave the keys on the counter and leave if it were their kids. I asked if that would be fine ? they stated that yes this would be true if you have no concerns. Only I did have concerns . The u haul when provided to me was way below that noted gas line and was initialed by the yard worker at the u haul location in Dartmouth. I was told " well then you need to wait" i said for how long ? they said "a few seconds" Â  At this point I'm actually laughing out loud in frustration when an older man entered the customer service area from the sales department asking me to leave this location right away or he will remove me . I was baffled . I was shocked. This man appears to be in some sort of management position and was very elderly... i asked what I should do and what he would do he laughed and said I would leave ...when I let him know I wanted his name he left the area and retreated to his office screaming for everyone to hear. "complete your business and leave!" I stated I want to leave I'm waiting for the u haul guy. He said good and some profanity and rushing into the show room . All of this with customers present as well as a full staff to my embarrassment. This is not acceptable. Eventually after another 2 minutes of so the u haul guy entered with a smile . I asked if he was aware I was waiting and he began to laugh and walked by me. I said are you planning to help me ? he said leave the keys and go. I said I dont understand. He said leave the keys and go a second time. I attempted to go over my dispute with him he laughed and said that is fine leave the keys and go.Â  in frustration I left the keys and note of fuel and left the building. I then called the customer service and after asking multiple times I was reluctantly provided this address.Â  I am blown away by the lack of leadership , compassion, customer service or ethics in this whole ordeal. All staff were aware including the older gentleman that I has small children in the car with their PJs on and they laughed. This conversation as well as audio of the whole ordeal was recorded via my cell phone. I have many connections within the auto , transport as well as media outlets I intend to share this story with as well as the audio and some video I shot of the ordeal. The audio with the staff laughing at my concerns about my children is particularly cruel and inappropriate. The attitude of the elderly smaller gentleman when I asked him if he had grandchildren and if they were in the car would he be waiting . His response if cruel and inappropriate. If you would like any of this audio or video for your review I will forward it to you as well as the social media sites it has been released through.Â  Thanks for taking this complaint serious as I sincerely feel the team you have running your important location is a very poor group. no one stood up and said this isnt right why are we laughing at him? Not one of them... Also worth noting my brother, father, mother , father in law and brother in law , and neighbor have all bought expensive trucks through you location I have sent them all the video as they are relations of myself and my children. All of them will be writing you letters through the week of their thoughts. Most recently Tom my Brother who recently purchased a 2019 F250 from you location. I just cant believe someone little lone a group of people would out me though that at my own and my children's expences.Â  Thanks for your time,Â  Bernard McInnisÂ  GetÂ Outlook for Android

When trailer was being returned, Nobody answered the listed U-haul phone# during the 2 (two) days I was looking for confirmation. My phone call was not returned, although I left my information with a U-haul assistant.

Larry was great individual to work with in getting my trailer up and going. Very professional

Inside of box was not swept out with nails and screws on floor. Power Steering was difficult to turn wheel while driving slow.

Awesome service at pick up and delivery sites. Top notch!

to make sure truck is fully working ,like heat and doors work fine

To many people involved in renting all with a different story .told me my mini van would haul the trailer I rented and my full size truck was to small everyone I was dealing with told me a different story

Nothing. Everything went exceptionally smooth. Doing all the paperwork online before I got to the rental location was very helpful.

Do a walk around of the vehicle with the customer so ensure the vehicle is in good condition, both mechanically and physically.

I ordered a 6x12 trailer a month before I needed it. I was informed the day of my rental that only a 5x8 would be available in my area. The closest 6x12 was over an hour away. I was fortunate that the uhaul system was flawed and there happened to be a 6x12 trailer at the Truro location that I was able to take. The uhaul rep was not on site when I arrived at 4 pm despite me confirming over the phone that morning that I would be there before 5pm to pick up my trailer. The trailer itself had a broken chain, but I took it anyway because it was the only one within an hour radius and the 5x8 was not large enough for my needs, hence why I order the 6x12 so far in advance. Fortunate, but unsatisfied. H

Excellent service, Larry at Hollis for goes above and beyond to make sure everything will run smoothly!!! A definite asset to your company!!

Originally in had booked a 15' truck, but because of availability I 2as bumped up to a 20'. When I went to the Elm Street location I had waiting an hour for the truck to show up as the previous renter didn't show up on time. The Elm Street location got me into a 26' truck from the Hollis location and had me on my way. Honestly not happy I wasn't able get on my way at the original time but very happy they were able to accommodate me. Not their fault someone was late with the truck and they did try to contact them likely more than 20 times with no success.

Friendly courteous service! Best one yet and I move alot

The truck did not have winter tires. We got it stuck in 3" of snow three times and had to tow it out when empty. These trucks need winter tires in our climate, even if they are registered in Virginia.

My issue is not with the location directly but with the services. I was called stating we had to pick up the uhaul in another location because the one that was ours on court street was broken down. Upon getting to Juniper st for the new one. The online service had thr wrong number so we had to call customer service. The lady was rude. We got the uhaul only to be called whil on the phone with customer service by someone on court street location stating they see us trying to get the truck and to please come in for help. I went into the Juniper street location but they were confused. I called the person who left the nessage only to be told that they were at the court street location with our fixed truck. But we already had the juniper street truck. This all made us an hour late and caused us to not be able to move into the apartment that night due to being past quite time hours. So our next day was ruined due to having to move in that day. I am very unpleased.

The Gentleman, I dealt with at Hollis, was exceptional, friendly, all in all, a fantastic experience.

My only complaint was that I was quoted 55.00 for a car trailer when a 6x10 is only 29. Took the car trailer anyway because it was smaller. Check your pricing U-Haul !!!

the trailer was very heavy. my husband needed to ask for assistance to lift the trailer onto the hitch. If the trail had a trailer jack it would be more user friendly.

The gentleman that we dealt with at this location was excellent.