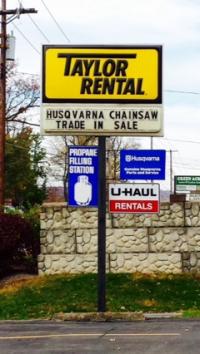 I took an hour to get the trailer. The trailer wasnâ€™t checked when attached to my vehicle. The left turn signal didnâ€™t work. No customer service when advised the trouble had with the lights.

Nice large lot. Easy to back up.

drivers side window inside was a bit dirty. Jared employee was very good, efficient and friendly.

The truck was not cleaned out. I was told that it just came back the night before and they did not have a chance to clean it. I cleaned the cab from all the coffee spills and they did a quick sweep out of the back; which had a little residual dirt in the grooves of the floor. At the destination, they wanted to charge us for cleaning out the trailer. Once I explained, they believed me and did not charge; which I appreciated, but I was not happy to be blind sided like that after driving 1,300 miles

Have a designated U-Haul representative.

When I got the trailer home after picking it up, I observed that the trailer bed was covered in debris left over from the last rental (leaves, bark, dirt, small pieces of broken plastic and two screws; I have photos if you'd like them). What I swept out filled an entire dustpan. Also, the right side tire was noticeably deflated. Tire pressure gauge showed it to be at six (Yes, 6) pounds. I used my compressor to inflate it to 60 pounds. It showed 13.5 pounds the next morning, so I re-inflated it. It then seemed to hold air until my destination.

The shifter needs to be pull toward the driver to shift into park otherwise the truck doesn't start. Also stalled once and was difficult to get it started.

The guy working didn't know he had a truck on site to be rented which was concerning coming in to pick it up. The truck was terrible. The front 2 tires were bald and we had to drive in snow so it was very concerning.

The trailer I rented didn't fit the van that I was told would fit I was lucky a friend had one that worked.

Person that waited on us was Great. It was 7:00 am and he was ready with our vehicle even though the storm of the century had just ended the day before.

this is the 3rd. auto transport that I rented in the past month. The unit was rusty with some holes in various areas. It should be scraped. Not what U-Haul should present to the public. Carl

I was over charged a day because they took a while to check it it. After many calls I only got part of the overage charge back.

Easy in and easy out...entire transaction was smooth.

This was the only store that had the size uhaul I ordered. I had to drive out my way by almost 10miles to pick it up from the rental place. This was a franchise vs the actual uhaul store I went to. Payment didn't show up on my card for 4 days after purchase. The equipment was old, missing reflectors. Not too impressed. Very expensive for a two day trip too.

The counter support was very good, but the person who handled the attachment of the trailer to my truck was very unique professional and his language was terrible including numerous expletives. In addition, he did not check the brake and running lights which were inoperative. We found this out on our way to NC when we were pulled over by a State police officer. Fortunately we were not given a ticket. I have previously rented from U-Haul in the past and never had a problem. This is the first time.

Great service. Needed the vehicle for extra time. No one had reserved it so I was able to keep it for as long as I needed it. Just what I needed. Thanks!

The interior of the truck was dirty. The floor had residual mud. The dashboard was covered in dust and the seats were heavily soiled. Quite unexpected for a new truck with only 6000 miles on it. It looked like it had never been wiped down between uses.

I had to drive 35 miles each way to pick up this truck when there are 2 U-haul locations with in a mile of my house. The truck only had 4500 miles on it and it was absolutely filthy inside and out. There were stains all over the seats, the floor and center island were filthy as was the dash and there was no windshield fluid in the thing. Pathetic to say the least. I am in need of six more rentals this fall and I will not be calling U-Haul. You are by no means the only truck rental company out there and if this is how you do business then I see a slow demise of your company. I rarely complain about anything but I was so disgusted by the ordeal I felt it was worth my time. A former loyal customer.

They are not a regular uhaul rental place. The one man that took care of us was very helpful but the overall experience was confusing as the other employees weren't involved and not helpful.

We dropped the truck off after hours, so we did not go in, nor did we talk to anyone. It was a very convenient location, and the key drop box was very accessible.

Don't make the customer wait 20 minutes in the parking lot and forget them!