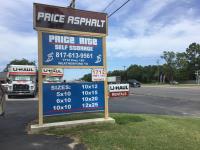 Hours on door said they should be open. They were not. I called, the voice on the phone told me to hold for assistance and the phone line went dead.

The truck was dirty and still had previous drivers empty water bottles in door. I had to wipe inside window myself because they must have used a dirty rag or not cleaned it at all. Extremely dusty inside. They also read the gas gage incorrectly and I had them correct it before I left. I was not happy at all with my first time renting a uhaul.

Agent was rude, and treated me as though I was an unnecessary distraction from the pile of paperwork she had on her desk. The 10" truck windshield was absolutely so dirty that even the trucks's wipers and fluid did not clean it. I asked for a squeegie so I could clean it and was told there wasn't one available. The dirty windshield was a Safety Hazard in the glaring sun. She offered another truck, but told me I would have to wait until she was done with a second customer, and secondly after she Checked IN another truck before renting it out. I had made my reservation online the day before, and arrived on time. I do not understand why: 1. My truck was not adequately cleaned for Safety, and 2. Any reason for the rude, impatient treatment I was subjected to. I have NEVER had such bad treatment ever before from Uhaul. This woman may have thyroid issues? I am being nice....

Friendly and helpful to ensure correct equipment was selected.

Thank you for assisting me in my extending need for truck.

Very nice people at the location

I was supposed to pick the truck up at 9:30. Nobody was there. I ended up getting the truck online after 30 minutes of waiting.

Maybe be a bit more friendlier

This is not a secure pickup or dropoff site. The lock boxes for the keys to the trucks are broken and if you use the Uhaul box they charge $20 extra, and that box is not locked either. So what's to keep anyone from coming and selecting whatever truck they want to seal and use and damage and then you the customer or still liable for that vehicle? We also rented a utility dolly which was not in the truck and they were closed and it took an Act of God to get the money refunded to me. The owner of the business was late and not open on time at 9:30 as posted on the website. However the door says they open at 8:30. When she finally pulled up I asked her if this was her business and she said "Yeah what can I do for you?." I told her about the issues and she Shrugged me off like it was no big deal. She told me I didn't go about returning the U-Haul Dolly the right way and that since I had done it through a U-Haul that she would have to write me a check for the $7. And that I should have come to her first. Papers and invoices were stacked up all over that desk I I think she might need some help in organization but I definitely hope none of my personal info is stacked on a desk for anyone to see. This experience was definitely not great. We did however have a great experience have an actual U-Haul dealer in Fort Worth off of Westcreek and Altamesa. I will never rent from another third-party of U-Haul again.

Charles at 2200 Ft. Worth Hwy, Weatherford, TX was especially helpful & is an asset to U-Haul.

Location was fine & easily accessible. My problem was with the online pickup process. It took us 45 minutes to leave with our truck because of the slow online process which was also confusing as my screen kept waiting & waiting

Not a thing. This location is exactly what I've come to expect from UHaul. Clean trailer in great shape. Easy p/u, easy drop off.

Although the establishment was closed for the day the proprietor saw me coming and took my rental return. Very professional and very courteous. Highly recommend Price Right moving and Storage in Weatherford Tx

Staff was timely and friendly. The process was very easy for picking up my rental.

Here's how they treat veterans... This storage facility has pissed me off badly. I am not big on writing reviews because i do not like wasting more of my own time due to TERRIBLE service. So, I rented a U Haul around 12-1pm on a Saturday (March 23rd, 2020). Ended up getting there that day around 3-4 pm. The storage facility was not open when I arrived, so I had to use the U haul truck share. This allowed you to do everything over the phone in order to rent the U haul. The last of the steps is to get the key to the truck from a small 6x6 box that was locked with a code when you are finished with all the steps needed to check out the U haul. I got the code and put it into the numbered combination Truck share box. Opened the box and got swarmed by a minimum of 4 wasps that had a big nest built in the box. Ended up getting stung on my back, thought I felt something but was not sure until I left because i was in a hurry to move my house. About 30 minutes later my back/shoulder was on fire. I ended up having a fever the whole day and it was already 95+ out here in Texas. I was able to move the house at about 50% less effort because of the way I was feeling. I had to pay someone to help me move now because we could not get the job done as planned because of my situation. To make a long story short, this added an extra day of moving, had to move in the rain because we added another day, had to take an extra trip which added more to the total bill for the move. Ended up having to drive back to the storage facility that night because I had a feeling if I did not get some pictures then i would be made out to be a liar. I'm VERY glad that I did because the lady at the storage facility told the U haul claims department that there was no nest in the box, and she had just put the keys in there a couple days before. This is total BULLS&%T because for one, I have dated pictures, two, the groundskeeper visually saw the nest with me when I turned the truck in (security cameras will show us both looking at it), three, there is no way the key was put in there days before like SHE told the claims department because I had just rented the U haul THAT DAY, there is no reason that this one trucks specific key would be left in the box for a couple days. I only opened the box and got swarmed, does anyone believe that someone only hours before this, not only opened the box but put a key in also and did not notice or get swarmed by wasps? Another thing to add, the day I turned the truck in I told them about the incident, and they acted like I way lying. The lazy woman working there would not even get up to look at it and she was rude and unhelpful. I am assuming she is the one who lied and told them that there was never a wasp nest in the box. This last part does not really have anything to do with the storage facility but U haul themselves. I called to inform them that night that this happened at an authorized dealer for U haul and the first person I talked to ba

The woman that helped was amazing. Much better experience than the first dealership down the road I originally used. She was quick, informative and extremely professional. I won't rent anywhere else and have already praised her on social media. The other dealership in town was extremely unprofessional.

We were told to drop off at 2200 Ft Worth Hwy. when we got there they said they were not taking trailers. Very rude. Ask for help to find where we should take it. They said they didn't do that. So we dropped our second uhaul at 1712 Fr worth hwy. very helpful, accommodating and pleasant. Customers in line said they were at 2200 Ft worth hwy and they won't return. Very rude to them too.

There was nobody there when arrived. This was during listed opening times. Had to call, regional office, then some one showed up. Unloaded trailer but the guy there didn't check me out. I noticed that on the receipt that it listed date of return as 3-15 and I returned it on Friday the 13 th. I wasn 't charged for anything extra but it was strange that it wasn't shown as checked in on the day I returned it.

I was not notified there was a mileage cap, and that if we went over it there would be a fee. I also was charged $400 more than I was quoted online. All the surprise charges really put me sour towards the company/representatives.

There was pretty much no place to park the trailer when I went to return it, so I had to park it near the office taking up vehicle parking spaces. Sorry about that! But there wasn't any other option.