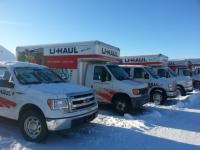 U haul in westlock is the best service ever

Nearly impossible to find. People in Westlock have never heard of this company and they are technically not in the town of Westlock at all. People on phone (switchboard) were very unhelpful. Basically told me they don't live in Westlock and I asked well what can I do and they said...I don't know, sorry we can't help. When I asked to be transferred to manager they transferred me to someone else (a guy) and he was the MOST helpful of them all. He made me feel heard and actually calmed me down, I was very angry. I think his name was Joel...He was the only one who gave me great service.

Pick up should be near by to the customer

Recon Till was tricky to find. Google map didn't accurately describe where it was. We had to backtrack a bit. Otherwise it was fine.

Everything about the drop-off went smoothly and I was very appreciative of the support from this team. The location was easy to find and inviting.

Get rid of the app you currently have and go back to where there is a person to help. I would never recommend this style of puck up and drop off to anyone

Location is good they had my uhaul sitting outside the gate and ready to go ... thanks guys

staff were very pleasant but it took a very long time to get everything done, computer system not working well etc

The pickup location was fine but the overall experience with Uhaul was less than expected. The booking location in Boyle was extremely helpful and accommodating. However, I had booked a 26 foot truck. Received a 20 foot truck and small utility trailer. Uhaul was accommodating in regards to allowing an extra day for return but it wasn't needed. However a second trip was required because the trailer and 20 foot truck were not quite enough. That's why I had booked the 26 foot because the second trip would not have been necessary. Because it was there was an extra mileage cost generated. The truck itself has not been properly maintained. The windshield wipers were worn out and were a problem in the rain. On the pick up walk around the truck gas gage showed a full tank. However, once the truck was in motion there was only half a tank of gas registering. When the truck was returned to the location it was returned with 5/8 of a tank of gas and I was charged the top up of it. Upon calling the drop off location about this I was told I should have returned and told the agent about it. I don't feel that's my responsibility. I presumably rented it with a full tank. In total Visa was charged an additional $123.19 for the additional mileage and fuel and I wish to dispute this charge. For both the mileage and fuel. If I'd have received the truck that I had booked, neither of the charges would have presented. Thank you.

I used uhaul quite a few times. But this was by far the worst experience I had. In the past I would book the week of my moving and I wouldn't know if I was getting my uhaul. But somehow it always worked out. This time I was actually doing my due diligence and booked 5 weeks in advance to guarentee my uhaul. Which was coldlake local move. From cherry grove to cold lake. The week of my move I get a call from uhaul saying they dont have my uhaul. AND saying I'm not priority Hence this is why I booked 5 weeks in advance. The closest one would be 4 hours away. One way!! So what ever I excepted the fact that I had and use up a whole day that I could of been packing, on picking up my uhaul. I get there and noone is available. No one told me about the 24 hour online pickup. And wasted another 2 hours getting that figured out. I just think that who ever orders first should have the priority of using the uhaul. I orders a 26 foot and got a 15 foot moving van. Which took 3 runs instead of 1.

I dropped it off after hours. There was no instructions as to where to park so I parked in front of the gate. Then someone came along and told me not to park it there but didn't explain where.

More organized. Called the 1800 number 3 times after different locations would cancel the trailer I needed. Up until the morning of picking up the trailer, They were still switching the trailer that I needed. Very frustrating and extremely disorganized. Locations that I picked/ dropped off trailer to were fine. Believe it was more the 1800 peoples fault assigning trailers that locations did not have.

Don't overbook the rentals. I had to make a 200 km round trip detour on the day I already had to drive 700 kms. It was an additional 2.5 hours not to mention about an extra $60 in fuel. Costs in time and money not made up for by UHaul. The Westlock location is great however. The rep at the store was nothing short of fantastic.

Provide a method of locking the trailer hitch to the truck for overnight security.

The gentleman assisted with unhitching and was friendly.

The address given will take you to the post office since that's where the mail goes. I had to call multiple times to find the correct location for drop off.

I had a horrible experience at this location. To start I was supposed to have the truck at 10Am as per my reservation and received a phone call stating he wouldn't be around till 10:30 and was still later than that. The size of truck I reserved wasn't available so I had to get the huge one as it was the only one there. I was then told it would be 189.00 but he would do it for 160 which was way more than I thought it would be. After almost an hour of him cursing and swearing at his computer, I received the correct rental amount. I paid and left. I will defanitly find other arrangements to move next time. If you care to know more I can be reached at 780-307-3243.

I have rented several uhaul's over the years and have experienced a broad range of 'acceptable' practices when it comes to state of rental vehicle. Owner takes your safety and maintenance of his Uhaul vehicles very serious and it shows. Walk through was very well done & customer service 2nd to none. Would gladly rent from this business in the future.