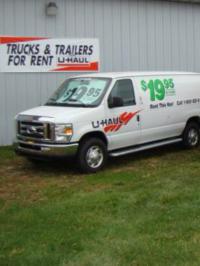 Cortnee was very knowledgeable and professional thanks for making my experience great. Thanks again and keep up the good work Cortnee

No improvement necessary, U-Haul associate at North East Mini Storage was fantastic she accommodated all of our needs and questions.

Had to Rent-A-Car and drive to Maryland 30 miles away to get a U-Haul.

This office added an additional 5 miles to my total price. I wrote down the miles when I parked to truck.

Only a couple of parking spots, so difficult to maneuver large moving truck

When I rented the van i was told there was going to be a $65 hold on my card, I replied $65 the uhaul employee stated yes but don't worry that won't be the final price. I assumed this meant it was going to be a cheaper cost when I went to settle up another employee stated the coast was $69 plus I put $10 gas in the van. So basically I paid close to $80 to use a van for for not even 2 hours time. I tried to explain this to the 2nd employee stated that the other employee should have explained it better to me. I said well how is this my fault and I tried to talk things out and with the employee and have a better understanding of the situation she began talking over me and and stated well I could have charged you more basically being a smart ass to me. No one should be treated this way when renting a vehicle.

Efficient and quick. Location was clean!

My grandson actually hauled the trailer to Maryland to a storage facility that we rented to hold our goods while we finalized our main move in September. He submitted the paperwork to the clerk and she told him where to leave the trailer when it was empty. The next day I received a cal from u-haul asking where the trailer was. I contacted my grandson, got the information from him, and relayed it to the lady when she called the next day. It turned out that we had delivered the trailer to the wrong u-haul location which is very close to the one that expected it. She indicated that she did not understand why the place that we left it did not record the trailer as being returned. But everything worked out OK. All in all our experience in Maryland was OK and I will rent from u-haul a large truck when we move in September.

When charging the client, be upfront about rental for the days chosen. I understand mileage is later factored in. My rental case out to be approximately $315, which is not accurate for the two day rental plus mileage.

Service is always friendly no matter who is checking you out. It was quick, easy, and the van smelled like Fresh Pine when I got it. I choose this place every time I need to rent a van.

When paying for a service, the customer should not have to be made to travel to multiple locations for the goods or services in which they are paying. It does not seem like good business practices to change locations from which a service was ordered and give the customer no recourse but to have to waste their time that they are paying for, to go to a different location in order to get what they have rented. I have rented with u-haul in the past but this last experience has left a lasting bad taste in my mouth.

nothing everything was wonderful

Amanda was professional, friendly and efficient. Would definitely return to this location.

The person that I spoke with when I went to go and pick up the truck was only worried about being on her phone. I was given no instructions on how to drop it off. I had to call Uhaul to get instructions and then the box wasnt even there for me to drop off the key. I had to end up putting it in a payment box.

The lady who helped us was so friendly and knowledgeable.

Check in person name Landon was very rude. Told me to leave after asking about why she checked in my gas tank at 1/4 when it was above the line. I received my truck right in the middle of 1/4 and 1/2. When 18 miles. That doesn't even make sense. She then gave me the u haul number and told me to leave. I had both my kids (4 and 1) with me. I told her I was not leaving until it was solved. She then went in the back office and called â€œher bossâ€ who she was referring to as babe speaking nasty about me. I remained calmed and continued my on speaker conversation to u haul. She comes from the back claiming her manager said that I need to leave. I ask for her managers number and she refused to give it to me. So I asked her to call and put it on speaker. Instead of using the company phone she uses her cell phone to call a guy named Robert. Who says if they asked for me to leave then I should respect their wishes. And I ask for his name and position so I can report him as well because there is no reason I'm being asked to leave unless it's a race issues. I'm not making a scene at all. She goes she feels uncomfortable and sayings that her name is Landon and it's sir. I continue my conversation with u haul who lets me know someone will reach out to me later about this dispute. It's upsetting that they have no problem charging my card but getting it back takes forever. This is not the first time they have lied about how the truck was returned so I took a picture of where the mileage and gas tank was. I showed this picture to Landon and who admitted it was not on the 1/4 prior to calling whoever. But said she put it there because the contract says if it's at the 7/16 line they have to put it 1/4. Sounds like more lies to me. A 3 hour rental for 18 miles for an estimate charge of $50 turns into close to $100 because employees are dishonest about where the gas tank level is. Dissatisfied once again with castle storage in white plains or la plata md.