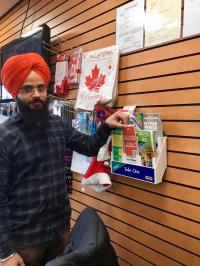 I never got my mileage back you just took my money

Two points here: 1. I live near large U-Haul centre located on Regent avenue and was denied pick up there. 2. The Selkirk location is a small convenience store located in one of the worst areas of Winnipeg. The store had one worker who during the hour plus it took, was mostly busy serving convenience store customers. I had to input my own information including credit card info, into a disassociated laptop which gives one no feeling of security at all. The worker was friendly but had very little time for the rental with the other work at hand. The vehicle was not very dirty but was not near clean.

Place was shady as it can get. Associate in this location has limited knowledge about the UHaul process and when we tried to contact his supervisor who was on-call because apparently he manages a lot of locations - he cannot be reached. For three days we tried to contact him, and he does not answer his phone or return messages. I was also charged an extra fee without my knowledge 4 days after I dropped off my rental even though the associate checked the rental on drop-off and gave me an ok!

Truck was filthy and price was so high

Took 42 minutes to get trailer. U-Haul representative did call later and gave me a credit for all the complications.

The pick-up time supposed to be 8:00 am but when we arrive at the location by 8:05 am the store is not yet open and the guy said we have to wait for 15-20mins. And when i did online check-in i unchecked the safe move but they still included it on my bill. And also upon checking the receipt they charged me for EZ Fuel for $11.83 I don't know why. We gas up first before we return it. We return the truck on the evening of that same day even we're booked for 24 hours. This was my 2nd time tenting a uhaul truck but my 1st one was excellent but this time it's like i was robbed because when i did the estimator it says it was like $35 but when paying it after there was lots of additional charges unlike the last time I've rented. It was ao disappointed.

The online approval system was brutal. It took 30 minutes to actually get into the U-Haul.

We had a horrible experience because we received a text that at first glance appeared to be a scam as the phone number was from Vancouver and we reside in Manitoba. Yet, it did not clearly state that our Reservation pick up location was changed (from the pre-arranged convenient location to a not so convenient location), it just stated an address for 'pick up', (which was not our prearranged pick up address). The person on the phone did not clarify this change in pick as well, but was more concerned for us to do an express check in. It still sounded like a scam, so we made phone calls our selves to find out that yes, it was a change in location to pick up and drop off. At this point we needed the vehicle for this particular date, and their only offer was to change the date, which was not an option for us. The people at the pick up location were nice but the process for uhaul rentals has drastically changed and the expectation is that you must use / have a cellphone in order to rent. Also, the rental offer use of the truck for 24 hrs, but if you give a certain time, as they press you for a time frame when you book, they will charge you extra if you go over the time (even though you could have rented it for 24 hrs). We were unaware that they had sent us an email to note any damage on the vehicle, but as we were already on our way, once we saw the email, it said it was too late for us to open it and document anything. Good thing we took photos and told the guy at the time of what we observed (although minor) because we did not get a chance as the email timed out. The biggest stress was not being clearly informed of the 'Change in reservation pick up /drop off location' as we were driving from out of town and had to drive around while making calls for clarification. Although we would never use uhaul again, good luck to those that do.

Get your online systems working.

The people at the location we're really nice, but the whole can reeked of puke. It was intolerable.

Bad experience overall, there almost an hour to get the truck and not very organized. Did not know how to complete the transaction and was on the phone 3 times. Same type of trucks were available at a U Haul dealer close by.

I rented a U-Haul 26'truck fromthis location and asked them if there are any additional charges for returning the truck at any otherU-Haul location within the city and they said no. But I was surprised to see almost 4 times the expected rental charges for returning the equipment at another location within the city. I won't recommend this to anyone unless the issue is resolved.

You could train the personal at the pick up and drop off location. Also make sure they can read English. Have a link with the satellite location and a main office so I wouldn't have gotten a phone call the next morning asking where is the truck you will get charged for an extra day. I did leave the truck exactly where I said it would be dropped off and it clearly says on the contract that the worker gave me, yet the person I spoke to the next day didn't have a clue. I can't complain at all about the truck it was great a 10. But the pick up and drop off experience was a 0. I have used uhaul before with no problems but it was at a actual uhaul location not a satellite. When I complained to the lady on the phone the next day she said " they don't work for uhaul" I would have to disagree because it was a uhaul truck that I picked up. I was disappointed with the service this time especiallly since I have used your service several times before with no problems. thanks for your time Janice Hodgson

The phone number on the information provided was a convenience store but he did not answer as a U-haul station. Very confusing!