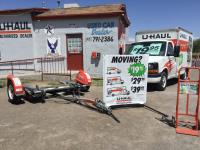 Hire personnel who will be there every day and not make the customers wait for two days to drop off rental equipment off. We were told in California that we could drop off equipment as soon as we were finished. Had to go to the drop location two days in a row and the place was closed. Wasted my time and mileage and still got charged for extra gas money. Drop off location is a total JOKE.

Was left outside waiting for more than an hour because the person in charge was busy on the phone with a friend , I could hear his conversation never opened the door and never got help to do my return. I knocked at the door to make sure my return was on time and I got screamed at because he was busy and couldn't help me. I am glad I had a representative on the phone and heard the conversation.

Drive and check out the trucks before renting to the next person. The truck was picked up at 9:30 a.m but my husband returned it to a closer location on Dyer about an hour later due to a loud roaring noise. They tried finding the noise all day but never could fix the problem so about 4:00 p.m he returned the truck to original location on Paisano. Everyone worked hard to fix the problem and we finally got another truck. They gave an extra 2 days but actually some sort of discount would have been better being we lost a whole day. We had to pack the truck until midnight because we are military and had to be out and clear our house the next day regardless of extra days added to keep the truck.

Just BAD. Picked this location because I thought it was convenient. Got there around 9:30 am local time, the office had the Open sign on, the door was open, but the screen door was locked, there was nobody inside. I waited 15 minutes. Nobody showed up. Called the number I had in the contract, turned out it was not the office number but a regional number and they told me to leave the vehicle there and leave the key in the mailbox, which I did. Over an hour later, got a call from a very rude guy saying he was calling from Uhaul, that he got the vehicle but there was no key. I said I had waited outside the office for 20 min and the screen door was locked while everything inside was turned on and nobody was insight. He turned very defensive. He said there were no keys. I said I dropped off in the mail box, I never saw the mailbox he was referring to, so I dropped the key at the one by the entrance, once he found it, he said "Ok it's here" and hung up on me. Customer Service at it's finest!!!

The person at the dealer was sloppy and very unprofessional. She didn't seem to understand how to work the system and basically copied all the information for my reservation from my online Uhaul account. She also gave me a piece of equipment that wasn't assigned to me. The location also made it so difficult for me to back a truck up to my rental trailer I had to get someone to help me manually move the trailer 180 degrees to put it in a better location for me to back my truck up to it. Worst experience ever and I will absolutely look elsewhere before renting with Uhaul.

They didn't read my contract allotting me 7 days instead of 5 and charged me for 3 additional days! What kind of scam artist is running this place? And the location is damn near inaccessible with all the used cars filling up the lot.

Albert the assistant manager was very rude, when I called to follow up on a rental issue. I asked him for his last name, he said it was uhaul's policy not to give out last names. When he was being rude I asked for the 1-800 number so I can talk to someone else about the equipment rental issue. This Albert said it was against u haul's policy to give out the 1-800 number. Albert should not be affiliated with uhaul in any way. He gives u haul a bad name.

Give the awesome lady who helped me a better office.

Personel were friendly and helpful. The paperwork was not in order and had to wait till it was corrected because of the original truck exchange.

We made reservations on line for a trailer rental. We made a mistake and rented it to return to the same location. However, when I went to pick up the trailer I explained to the gentleman that we were not bringing it back to El Paso, we were turning it in to Alamogordo. I told him that twice. At two different times while we were going through the contract. Never once did he say if you don't turn it in to El Paso, you are going to be charged extra. We ended up with a $252.00 charge for not turning it in to El Paso.